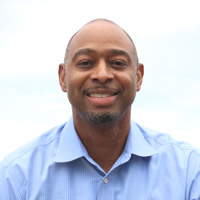 Roger McClendon is the Executive Director of the Green Sports Alliance. In his role, he leads the Alliance of international sports and stadium executives, as well as sustainability experts, to use sports as a vehicle to promote healthy, sustainability communities throughout the world. Prior to joining the Alliance, Roger was the first-ever Chief Sustainability Officer for Yum! Brands, whose holdings include Taco Bell, Pizza Hut, and KFC restaurants. He also led the development of Blueline, a sustainable design guide for restaurants built on the LEED certification program. Blueline was a global standard implemented in approximately 5,000 Yum! Brand restaurants globally. Due to his efforts, Yum! Was named to the Dow Jones Sustainability Index in 2017 and 2018, as well as one of the 100 Best Corporate Citizens by Corporate Responsibility Magazine. Roger’s other passion is basketball. He was named a McDonald’s All-American in 1984, on eof the top 25 high school basketball players in the nation and went on to be a four-year starter who closed his University of Cincinnati men’s basketball career as the No. 2 scorer, second only to Oscar Robertson at the time. Roger was inducted into the UC Athletics Hall of Fame in 1998. He holds a Bachelor of Science in Computer & Electrical Engineering from the University of Cincinnati.