Why The NHL Is Getting Involved In Climate-Change Efforts

Why The NHL Is Getting Involved In Climate-Change Efforts

By Kevin B. Blackistone, ESPN panelist and visiting professor at the Philip Merrill College of Journalism at the University of Maryland, writes sports commentary for The Post.

I was reading a random article last month about the goings-ons at the historic climate change conference in Paris when my eyes stumbled across what appeared to be a fish-out-of-water participant – the National Hockey League. The piece mentioned that an NHL vice president for corporate social responsibility, Omar Mitchell, presented on sports and sustainability. The NHL. Climate change. I had to call the league. 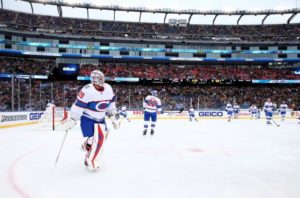 I found Mitchell. He explained from Foxborough, Mass., the site of the league’s New Year’s Day Winter Classic, after giving U.S. Environmental Protection Agency administrator Gina McCarthy a tour of the league’s game-day set up. The NHL and the EPA. McCarthy was invited to the game by the league after the EPA awarded the league a 2015 Green Power Leadership Award for its efforts to reduce its carbon footprint. Hockey. Really?