What’s that Green Thing on Top of Georgia State Stadium?

What’s that Green Thing on Top of Georgia State Stadium?

By Jerell Rushin, The Signal 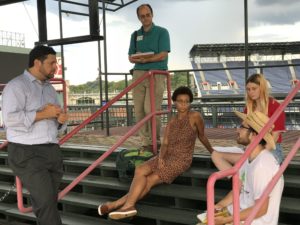 Photo by Jerell Rushin | The Signal

The Panthers play in one of college football’s leading stadiums in environmental sustainability. The year-old stadium made Georgia State one of three finalists for the United States Gypsum Corporation (USG) NACDA Sustainability Award, given by the National Association of Collegiate Directors of Athletics (NACDA) and USG.

The award is given to universities who incorporate “sustainable practices and materials into their athletics facilities.” Georgia State did not win the award but still received $10,000 in USG merchandise to put towards athletic and academic buildings.

One of Georgia State’s student organizations, the Student Environmental Team (SET), is building the garden and has optimistic goals for the future. SET member Gina Sheridan said the club will use the garden to provide educational opportunities for students and the Georgia State Athletics staff. It will engage the community by letting them grow in the garden, providing them the opportunity to improve their agricultural literacy.

“It could allow people who work in this building to have their own part of the garden if they’re interested in that,” Sheridan said. “It could possibly inspire them to take more sustainable approaches to their building as well and perhaps recycle more, compost food waste more. Anything like that to get them thinking more.”

The garden isn’t bustling like New York City’s streets on a Monday morning yet, but Sheridan said having a garden space has been a goal of SET’s for more than four years. SET finally broke through in 2018, and though it was a strenuous, it was well worth the wait. Sheridan expects to start growing this fall.

“It involved a lot of going from person to person and finding out where’s a good space for us, who’s in charge of this space,” Jessica Jones, acting SET president in 2017, said. “Then after that, we petitioned with the Office of Sustainability and whoever would listen as to why we should have this space and what we would do with it.”