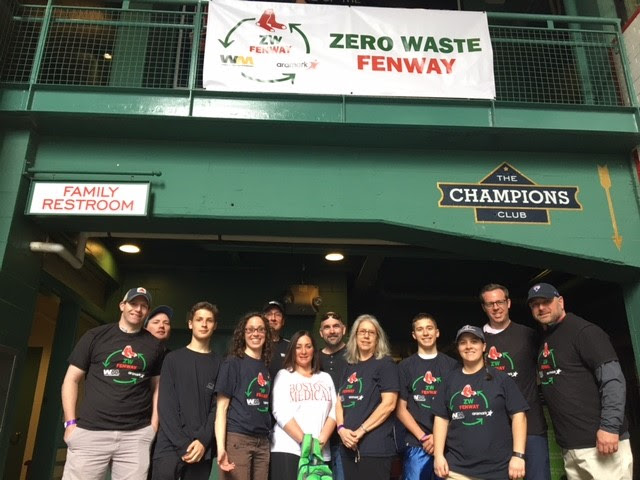 A typical game day at Fenway generates more than seven tons of trash, and Monday’s game was no exception. Monday’s waste sorting effort resulted in the collection of 2,178 pounds of recyclables and 221 pounds of organics from trash –which might have otherwise wound up in a Massachusetts landfill.

“Sorting the volume of waste generated by 40,000+ fans requires teamwork, and our volunteer crew was exceptional,” said Michelle Lee Guiney of Waste Management. “With multiple post-game events going on around us, including a party for 10,000 marathon runners, they worked diligently to gather and sort materials under challenging circumstances. We sincerely appreciate their flexibility, good humor and generosity!”

In the spirit of the event, volunteers received upcycled tee-shirts from The Red Sox Team Store, which are new, but obsolete Red Sox tees turned inside-out and specially branded for the event.  Through upcycling, each repurposed cotton tee-shirt conserves 700 gallons of water, and prevents the emission of carbon dioxide and the application of pesticides needed to grow cotton for new shirts. Volunteers also brought their own reusable water bottles.

Fenway Park provides ample recycling and composting bins, but a lot of items that could be sorted are often thrown into regular trash bins. Waste-sorting events such as this showcase the positive environmental impact of taking a few extra seconds to self-sort cups, trays, wrappers, food, and other items. “Recovering discarded items makes a tremendous difference in diverting waste from our landfills, significantly reducing greenhouse gas emissions,” said Guiney.

“The waste sorting event is a great showcase of the commitment by the Red Sox to promoting sustainable practices throughout the season at Fenway Park,” said Paul Hanlon, senior director, ballpark operations & sustainability, Major League Baseball. “Pursuing a zero waste event is no easy task and we applaud the Red Sox ownership, the entire organization and their partners for their hard work and environmental leadership in this endeavor.”