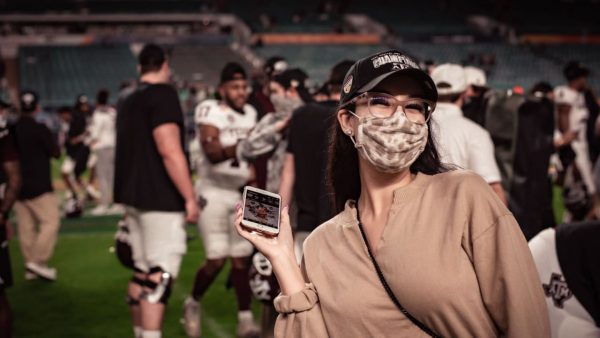 When Natalia Dorantes virtually attended the fifth annual NFL Women’s Careers in Football Forum in February, she had to introduce herself to Washington Football Team head coach Ron Rivera.

So, as Commissioner Roger Goodell kicked off the event, she directed messaged him over Zoom.

“I’m a very proud Latina, and that’s like the first thing I said,” Dorantes recalled in a virtual interview Wednesday. “I was like, ‘As another Hispanic, I think it’s great that you’re in football because there’s not many of us, so thank you for that and thank you for being on the forum. It shows a lot that you’re just here supporting us.”

That introduction turned into a conversation, which then blossomed into a relationship and finally resulted in a job offer. Dorantes, 26, will serve as the team’s coordinator of football programs, working with all of the organization’s department heads to manage the internal requests for Rivera. It’s a job that requires trust, organization and confidence, Rivera said, and he believes Dorantes is the right person for the job.

“This is kind of new ground for us because I’ve never had a ‘chief of staff,'” Rivera said. “So I needed a person that’s gonna be able to interact with coaches, with coordinators and may have to say, quite honestly, ‘No, I don’t think Coach wants that,’ or ‘No, Coach doesn’t want that,’ you know what I mean? Because the one thing I want her to understand is that she’s going to have my voice, and I trust her.”

Rivera began his NFL coaching career as a defensive quality control coach for the Chicago Bears in 1997, so he understood all of the logistics associated with being a head coach. But since reaching that position with the Carolina Panthers in 2011, he always did those types of things himself.

That was until the 2020 season, when his cancer battle forced others to take over some of his workload, including all of the calendar and planning responsibilities. Once he beat cancer and Washington began its playoff push, he realized how grateful he was not to have to expend energy on those assignments.

In reflecting on the campaign, Rivera concluded he needed someone to handle those duties full-time, and he looked to the Cleveland Browns for the guidance. Callie Brownson was thriving as the chief of staff for new head coach Kevin Stefanski, so Rivera talked to Sam Rapoport, the NFL’s senior director of diversity and inclusion, about Brownson’s job description and how he could create a similar role in Washington. He then spoke with former Panthers defensive coordinator and current Buffalo Bills head coach Sean McDermott, who hired Matt Worswick to be the assistant to the head coach in 2017.

Little did Dorantes know that she would be the next person to join the NFL in this capacity. Previously a recruiting communications coordinator for the Texas A&M football team, Dorantes was not looking for a job. But the more she got to know Rivera, the more she wanted to be a part of what he was building.

“On my interview, I couldn’t even put into words how awesome he was,” she said. “That whole process of me getting to know him, him getting to know me, meant so much more than, ‘Hey, can you do this?’ Of course I can, but do you know me? Do you know how I think? How I speak to people? Things like that really helped, and so that really made me excited for this because it’s all about the people.”

Dorantes was actually recommended to Rivera when he first arrived in Washington by Mike McCartney, who worked with Rivera in Philadelphia and who’s currently an agent. About a week before the NFL Women’s Careers in Football Forum in February, McCartney reached out to Rivera again. It just so happened that Dorantes would be in his roundtable group.

Rivera may not have connected with Dorantes if not for the forum, and the same could be said about now assistant running backs coach Jennifer King. She participated in the event in January of 2018, then made history two years later by becoming the NFL’s First African American Female Assistant Position Coach. In Rivera’s mind, these examples illustrate the importance of the annual event.

Rivera has long been praised for having some of the most diverse staffs in the NFL, but he is not singularly focused on bringing in diverse people. He appreciates different perspectives, which typically come from people with distinct backgrounds. His wife, Stephanie, is a prime example. As a former women’s basketball coach, she sees things differently than Rivera and his football-minded cohorts. Similarly, King and Dorantes can provide refreshing point of views in their particular areas of expertise.

At the same time, Rivera looks forward to a time when these hires are normalized. Women like Dorantes and King should not be singled out for their gender; they should be praised for taking the next step in their professional careers.

Rivera believes the league has gotten “much closer” to this realization over the years, and he’s excited to be a part of the continued progression.