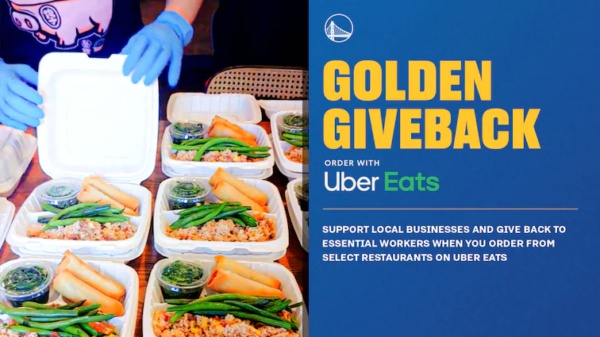 The Golden State Warriors, in partnership with Uber Eats, have announced ‘Golden Giveback,’ a weekly campaign to support local small business restaurants while feeding workers who are essential with COVID-19 response efforts. Golden Giveback will begin on June 24 to align with the Small Business Week initiatives being led by San Francisco and Oakland. More information can be found at www.warriors.com/goldengiveback.

“Dub Nation knows all about strength in numbers, and Golden Giveback, in partnership with Uber Eats, is an incredibly unique way for our fans to support local Bay Area small businesses while feeding local essential workers during the pandemic,” said Brandon Schneider, Warriors Chief Revenue Officer. “Uber continues to provide access to world-class customer service to the community, and we’re thrilled to step up with them now, in this time of immense need, to help small businesses and essential workers.”

Starting on Wednesday of every week during the campaign, the Warriors will promote one local small business from either San Francisco or Oakland on their social media channels. During that week, for each meal a fan purchases using the promotion code listed below, Uber Eats and the Warriors will match the total revenue earned over the course of the week. The matched funds will be given back to the restaurant to produce meals for Bay Area essential workers. Among the initial set of essential workers to receive the meals will be the Oakland Fire Department, AC Transit and the Bayview Hunters Point YMCA.

In order to participate in the campaign, fans will need to purchase their meals via the Uber Eats app, which can be downloaded at the Google Play and Apple iTunes stores. In addition to the meal, Uber Eats is offering $0 delivery fee on the food via the use of the below promotion codes. Other fees apply.

The initial schedule for Golden Giveback, presented by Uber Eats, is below:

To date, the Warriors COVID-19 Impact Strategy has delivered impact to various healthcare workers, school districts, non- profit organizations, and more, as the organization continues to aid various relief efforts in the region.