There are no grassy pitches or fields in basketball, but if Sacramento Kings owner Vivek Ranadivé gets his way, the world’s most popular indoor sport may soon be its greenest. 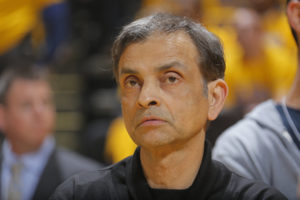 Ranadivé is doing everything he can do lead the way. When the Kings’ new Golden 1 Center opens in October, it will become the first arena in league history to be completely powered by solar energy. About 90 percent of the food and drinks served will come from within a 150-mile radius of California’s capital city and the stadium will use 40 percent less water than its predecessor.

“The Kings are using their visibility to help instigate behavioral changes in the marketplace and, actually, among their fans as they’re considering responsible environmental behavior,” said Allen Hershkowitz, president and co-founder of the nonprofit Green Sports Alliance. “They are validating the cultural shift in thinking around how we relate to the planet.”

There’s no shortage of ways to explain how Golden 1 Center has been constructed for the 21st century. About 15 percent of the electricity used to power Ranadivé’s $507 million arena will from come solar panels install on its roof. The other 85 percent will come from a new 10.9-megawatt solar farm operated by the Sacramento Municipal Utility District. The Kings are also installing LED lighting and a newfangled ventilation system that will reduce its reliance on energy-sucking rooftop air conditioners. In a blog post published on HuffPost last week, Ranadivé said the new arena will keep the equivalent of 4 million vehicle miles’ worth of emissions out of the atmosphere every year.