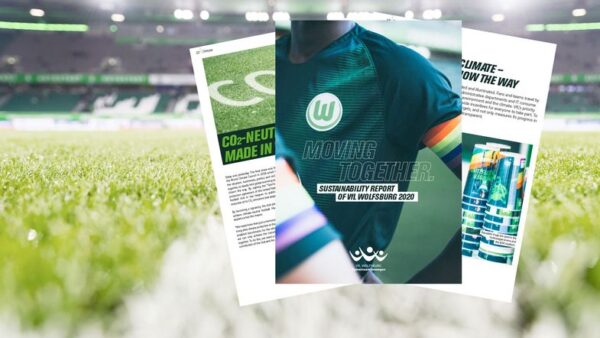 In terms of taking responsibility for mankind and the environment, VfL Wolfsburg have been leaders in professional football for almost a decade now, both nationally and internationally. The Wolves detail the concrete measures they take in the area of sustainability in a biennial sustainability report, the fifth edition of which has now been published. In essence, the report states that over the last two seasons, 2018/19 and 2019/20, VfL once again achieved ground-breaking successes with their activities. However, the report also addresses the weaknesses of the past two years and sets out the objectives and plans for the coming reporting period.

This year’s sustainability report takes a particularly close look at the two focal themes of climate protection and diversity. As recently as mid-November, the Green-and-Whites joined the United Nations’ “Race To Zero” initiative, thereby setting themselves the ambitious target of climate neutrality and net zero emissions by 2025. “We will seize our opportunities as a green football club that is sustainably transforming itself,” said VfL managing director Michael Meeske. “Today, more than ever, it is important to take responsibility for the future of football in all its forms and, more generally, for the livelihoods of the next generations.”

Over the past two years, VfL have also expanded their commitment to the second focus topic of diversity. The fight against forms of discrimination such as racism, sexism and homophobia is being supported through various projects. In addition, the Wolves regularly fly the flag for diversity. Be it via rainbow-coloured captain’s armbands or special jerseys, it is impossible to imagine VfL’s stadiums without visible statements in favour of an open society.