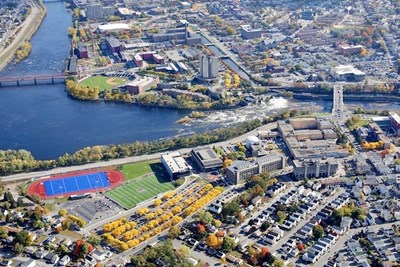 UMass Lowell is one of the “Coolest Schools” in North America, according to Sierra magazine’s annual ranking of the greenest colleges and universities.

UMass Lowell is one the “Coolest Schools” in the country, according to Sierra magazine’s annual ranking of North America’s greenest colleges and universities.

Compiled by the national magazine of the Sierra Club, the Cool Schools ranking assesses colleges’ performance on everything from how they get their electricity and dining hall food to what they teach students in the classroom. A record 300-plus schools participated in this year’s survey.

“If you look at where we started a few short years ago, the jump has been remarkable,” says Director of Sustainability Ruairi O’Mahony, who credits this year’s rise to the university’s latest Sustainability Tracking, Assessment and Rating System (STARS) report, which Sierra uses as a basis for its rankings.

Last year, UML became the highest-rated STARS campus in Massachusetts — and one of the top 10 in the country — with a STARS Gold score of 77.56.

That helped give UML a Cool Schools score of 80.04 from Sierra this year, putting it in a statistical dead heat with No. 15 UMass Amherst.

The University of California Irvine finished first on the Sierra list with a score of 89.95, followed by Stanford University (89.86) and Canada’s Thompson Rivers University (89.63).\ 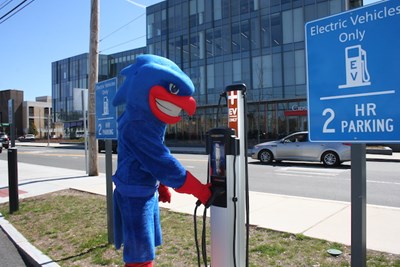 Rowdy the River Hawk checks out the electrical vehicle charging stations across from University Crossing.

“This is the first time we’ve accurately been able to capture all the work we’ve been doing over the last four or five years at once for the rating systems,” says O’Mahony, who adds that the ranking is a result of a university-wide commitment to sustainability that “starts with Chancellor (Jacquie) Moloney and extends throughout campus to our students, faculty and staff.”

“UMass Lowell has a lot to model for schools everywhere,” says Katie O’Reilly, Sierra’s adventure and lifestyle editor. “We at the Sierra Club have been continually impressed with this powerhouse research university’s commitment to teaching and embodying excellent environmental stewardship in all areas. The River Hawks are truly standouts in this increasingly important space.”

Established in 2015, the Office of Sustainability serves as a focal point for that commitment, providing resources and support for campus operations, education, research, student engagement and community partnerships.

From its Urban Agriculture and Farm Share programs, to its efforts around recycling and waste diversion, to the S.E.E.D. Fund grants it awards to promote green projects on campus, the office has helped the university become a leader in sustainability.

While the coronavirus pandemic has put many of those programs on hold, O’Mahony says the office is still providing core services such as recycling, and it continues to work with Mill City Grows on its partnership at the Rist Urban Agriculture Greenhouse and Farm.

“We’re using this time to strengthen our overall sustainability program,” O’Mahony says. “We got this great ranking, but the work continues. We need to move the needle further.”

The university received high marks for curriculum and research in its latest STARS assessment, something that O’Mahony says will get a further boost from the recently created Rist Institute for Sustainability and Energy (RISE). Integrating the Office of Sustainability, the university’s Climate Change Initiative and renewable energy engineering, RISE promotes sustainability-related faculty and student research through its fellowship program.

Campus and community engagement are other areas where the university excels.

Earlier this year, UML and the City of Lowell established a Green Community Partnership that will award grants of up to $10,000 for joint university-community projects that advance sustainability.

The university is also working closely with the city on a Pawtucket Street Greenway project that will improve the link between South Campus and the rest of campus for bicyclists and pedestrians.

And to advance its commitment to achieving carbon neutrality by 2050, the university recently received a $100,000 grant from the Massachusetts Department of Energy Resources to create a renewable energy master plan for the campus.

With the pandemic putting a strain on university budgets across the country, O’Mahony says outside grant funding will be more important than ever, as will energy conservation, sustainable agriculture and eco-friendly practices in general.

“This pandemic has highlighted the importance of the programs we’re doing,” he says.