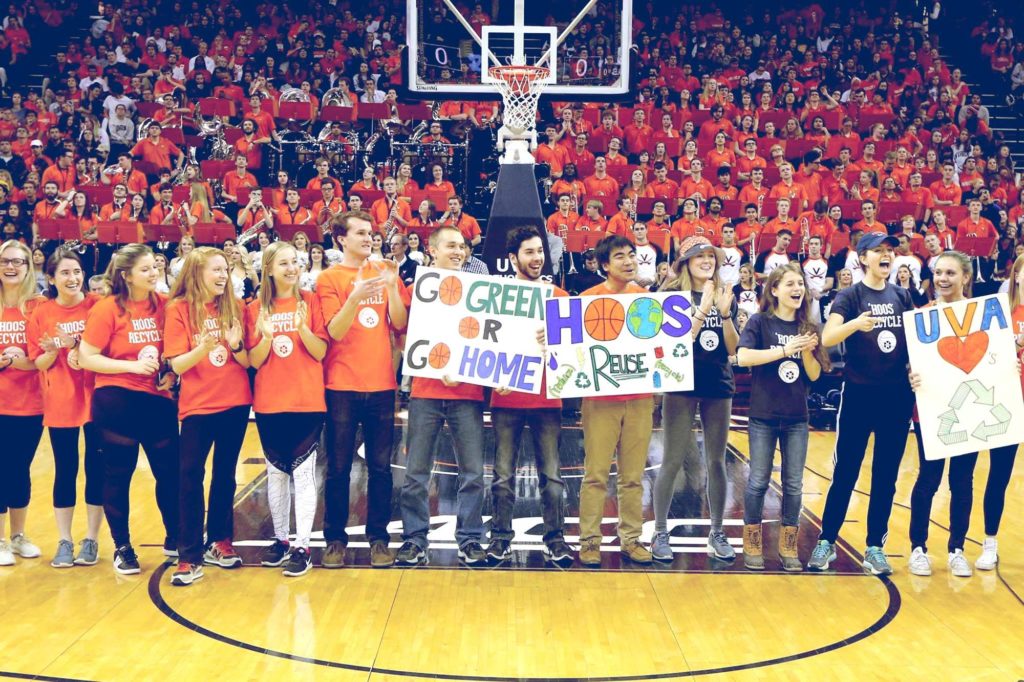 With the aid of student volunteers, UVA basketball fans diverted more than 90 percent of their game-day waste from the landfill. (Photo by Matt Riley, UVA Athletics)

The University of Virginia has become the first Atlantic Coast Conference men’s basketball team to achieve “zero waste” during this year’s Game Day Challenge. Fans participated in the event during a designated game ­– the Cavaliers’ 53-43 victory over the University of North Carolina on Feb. 27.

Zero Waste International Alliance defines “zero waste” as diverting at least 90 percent of waste from the landfill. With the help of 75 student volunteers, UVA Athletics, ARAMARK and the Office for Sustainability, fans at the sold-out game at the John Paul Jones Arena recycled and composted 94 percent of all waste generated at the arena that night.

The nationwide Game Day Challenge contest promotes waste diversion at college basketball games. UVA fans have long been placing paper, bottles and cans into recycling bins at John Paul Jones Arena, and a new bin was added for food waste and compostable items on Feb. 27. Fans kept 4,454 pounds of waste material from the landfill during the game, recycling and composting 0.48 pounds per person, putting leftover food and service utensils in one bin and plastic cups, bottles and cans in another.

Student volunteers staffed each waste station to sort materials and educate fans on composting and recycling. After the game, volunteers helped clean the stands, segregating compostables and recyclables to ensure the maximum diversion. The materials were then further culled by UVA Recycling.

Approximately 45 percent of the waste was composted and 49 percent recycled.

“This is our sixth year of working collaboratively to reduce landfill waste at athletic events and we’re thrilled to have developed a strategy that gets such high diversion rates that help UVA meet its waste reduction goals as outlined in the UVA Sustainability Plan,” said Nina Morris, sustainability outreach and engagement manager at the Office for Sustainability.