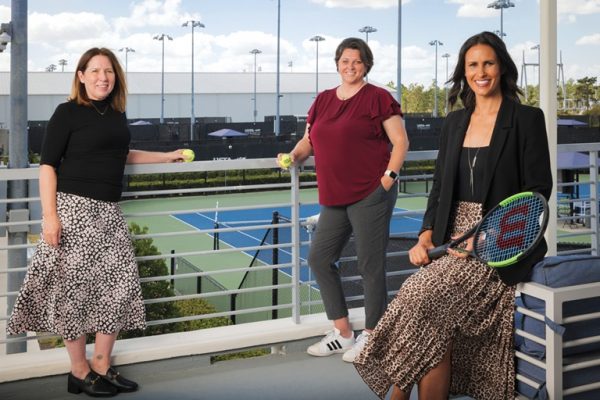 Davies will oversee the numerous junior competitions that fall under the USTA’s care. Rose’s role shepherds the organization’s involvement in the U.S. Open Series, the Davis Cup and Billie Jean King Cup, and Olympic and Paralympic Games, among other pro and exhibition events. And Wallen has a far-reaching job overseeing teaching, playing and spectator experience at the vast Orlando campus.

“They’re all extremely highly qualified and capable individuals, who also just happen to be women,” said the USTA’s chief diversity and inclusion officer, Marisa Grimes. “That is the result of the organization being intentional in how they’re identifying great talent, developing talent to grow into more senior ranks in the organization, and how they’re supporting the efforts of keeping people engaged and retained in the organization through professional development.”

Of the nine chiefs who report to the USTA CEO, four are women:

Of the 15 USTA managing directors, seven are women:

In the past five years or so, it’s become much more normal for the sports industry to talk about diversity and inclusion, regardless of whether sports properties were really ready to tackle the issue. Actual difference-making has been uneven, but the USTA continues to back up its talk with action, “and that’s what we’re most proud of,” said Andrea Hirsch, the organization’s chief administrative officer and general counsel.

When Hirsch joined the USTA in 2006, she was just the third woman in the organization’s C-suite. Currently, four of the USTA’s nine chief executives are women: Hirsch and Grimes; Amy Choyne, the chief marketing officer; and Stacey Allaster, the chief executive of professional tennis, and the first woman to be tournament director of one of tennis’s four Grand Slams, the U.S. Open. That wasn’t the case when Hirsch first arrived.

“It took time, years really,” Hirsch said, “to start the process of understanding that, as a sport that is so gender neutral, that we need to look more like the sport if we’re going to continue to grow the game.”

But that’s changed dramatically at the USTA, especially in the past three years. The organization established the Leadership, Empowerment & Accelerated Development program, which identifies talented women and cultivates them for senior leadership roles. In Grimes’ first three months in her role, she’s installed diversity and inclusion goals as part of employees’ annual review. And an internal talent identification program is also clearly paying dividends. Rose, Wallen and Davies were all internal promotions, a valuable thing for other women working at the USTA to see.

Hirsch first said that women know their voices can be louder and more prominent during USTA meetings, which are currently Zoom calls, then later corrected herself.