The US Open turned 50 this year and the United States Tennis Association (USTA) revealed a transformed USTA Billie Jean King National Tennis Center.  For over a decade, the USTA has continued to expand its work to lessen the environmental impact of the event.  Most recently, the USTA has expanded its environmental initiatives to incorporate the sustainability targets as outlined in the United Nation’s Sustainable Development Goals.  For example, to offset the carbon emitted by the international air and ground travel necessary for the elite player to participate in the 2018 US Open, the USTA purchased offsets with a climate-intelligent humanitarian component.  The USTA is also proud to premier an environmentally-friendly Louis Armstrong Stadium, which is the first naturally ventilated stadium with a retractable roof in the world.  During the construction of the stadium, more than 90 percent of the waste was recycled. In addition, the stadium is designed to use nearly 30 percent less energy than is used in standard buildings. The beautiful landscaping around the stadium was also designed to use 55 percent less water than traditional landscaping.

Tennis fans also enjoyed many of the other tangible aspects of the US Open green initiatives program while on-site at the USTA Billie Jean King National Tennis Center.  This included water refill stations, sustainable food options and low-flow plumbing fixtures.  The USTA encourages everyone—players and fans alike—to reduce, reuse, recycle and help us turn one of the largest-attended annual sporting events in the world into the most environmentally conscious. 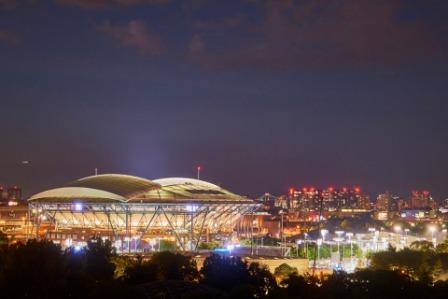 The United States Tennis Association (USTA) marked the 11th year of the US Open Green Initiative with a number of new environmentally sustainable components that aligned with the completion of the strategic transformation of the USTA Billie Jean King National Center and continues the tournament’s decade-plus commitment to reduce the impact the US Open has on the environment.

The new Louis Armstrong Stadium, the final project of the strategic transformation, is on pace to become the third LEED (Leadership in Energy and Environmental Design) certified building at the National Tennis Center, joining the Grandstand Stadium and the US Open Transportation Building. Louis Armstrong Stadium, the first naturally ventilated stadium with a retractable roof in the world, is designed to consume 28% less energy and uses 42% less water through waterless urinals and low-flow plumbing fixtures. In addition, more than 95% of the waste from the demolition of the original stadium was recycled.

Additional environmental considerations made during the planning and construction of the new Louis Armstrong Stadium include:

Also new for the 2018 US Open was the expansion of the preexisting carbon offset initiative to include a climate-intelligent humanitarian component. For the past several years, the USTA has been offsetting the carbon emissions generated by the estimated 3.5 million miles the players travel to compete at the US Open.
This year’s focus was to invest in carbon offsets that support an improved cook stove program in Malawi, where a majority of households use firewood to cook on inefficient open fires. The open-fire practice has detrimental impacts on the environment, putting pressure on local forests as well as on the health of the women and girls who breathe the smoke from cooking. Each improved cook stove used in the program saves more than three tons of firewood and six tons of CO2 emissions each year – contributing to the environmental benefits on a global scale. On a local level, women and girls in Malawi save time by collecting less firewood, and they are exposed to less smoke compared to cooking over an open fire, reducing respiratory disease.  Additional contributions will be made to this program to offset the carbon footprint resulting from the limited amount of US Open waste that is not able to be diverted from landfills.

More than 90% of all paper products used at this year’s Open was made out of recycled and/or compostable materials.  All US Open-related printed materials were composed of at least 30% post-consumer waste, and enough recycled paper was used to save more than 1,400 trees. 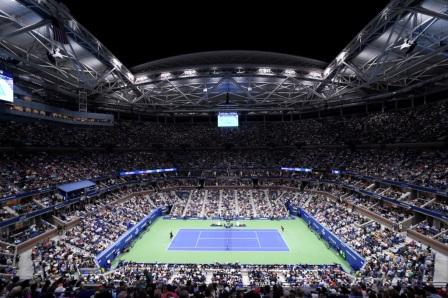 The US Open worked closely with its concessionaire, Levy Concessionaire, to continue to grow its environmental program.  For example, in response to the growing national movement to mitigate the environmental impact of plastic straws, a biodegradable version replaced the plastic straws and stirrers at the concessions and restaurants located throughout the US Open.  In addition, to support the initiative, Grey Goose opted to not use straws in their cocktails, which significantly reduced straw waste throughout the site.  Lastly, US Open chefs embraced the Imperfectly Delicious Produce program that supplied imperfect fruits and vegetables that would otherwise be discarded, further eliminating food waste.

Since 2008, working with environmental consultant eco evolutions llc, the US Open has reduced its greenhouse emissions by 94,000 metric tons through waste diversion, recycled paper use, carbon offsets and renewable energy certificates. More than 4,000 tons of waste generated during the US Open has been diverted from landfills, saving over 4,000 tons of greenhouse gas emissions, the equivalent of 845 passenger cars being driven for a year. Through composting leftover organic matter, approximately 600 tons of food waste has been converted into nutrient rich compost for gardens and farms, along with over 100 tons of food being donated to local communities.

The USTA will be donating the metal lids from tennis ball cans used during the 2018 US Open to the Ronald McDonald House in Valhalla, N.Y. These metal lids will contribute to the Ronald McDonald House’s Pull Tab Collection Program to benefit that home. The USTA will also work with Terracycle to recycle and find a new life for the remaining empty tennis ball cans following the tournament.