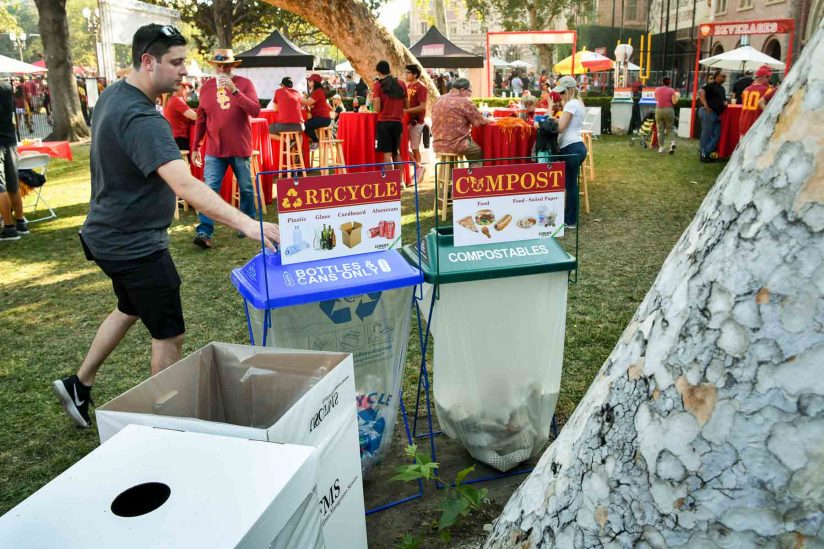 The Pac-12 announced that USC was the member university that diverted the most waste from the landfill during a game last fall. (USC Photo/Michael Owen Baker)

As the players on USC’s football team claimed possession of the Pac-12 crown in 2017, the fans living and dying with those Trojans during fall Saturdays at the Coliseum were doing their part to hold on to a championship of their own.

Last week, the Pac-12 Conference officially announced USC as Zero Waste Competition champions for the second consecutive year. Despite the Pac-12 also calling the competition the “Zero Waste Bowl,” this wasn’t quite like those games that cap each college football season.

However, the accomplishment might be even more impressive than winning one of those vaunted January games because of what it says about the victors as stewards of the planet.

The “Zero Waste Bowl” is a competition between every Pac-12 institution that determines which member university diverted the most waste from the landfill at a selected football and men’s basketball game, as well as which used the most innovative methods to expand reach and impact of sustainability education efforts.

Each school is then judged on a summary scorecard describing the efforts involved in the “zero waste” football and basketball games that they submitted. These games are scored in three different categories: participation rate, overall innovation, and most importantly, the actual rate of waste diversion itself.

The winning entry submitted by the team from USC Sustainability was for the Oct. 14, 2017 football game against Utah, where a 90.96 percent diversion rate was achieved by fans and crew at the Coliseum. Fans at the game were encouraged to participate through promotional activities like an interactive tailgate, giveaways, flash mobs, a live trumpet brigade, confetti cannons and a “green game mascot” named “Recycle Man” who educated fans on the best methods of sustainable waste disposal and other sustainability best practices.