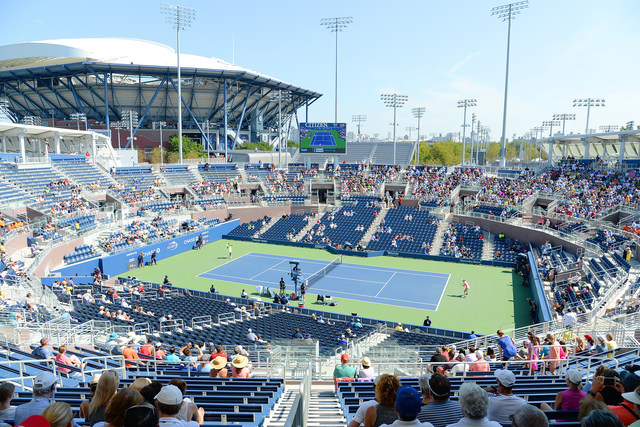 The new Grandstand is highlighted by a blue court customary to the US Open, but the new 8,000-seat stadium is also going green.

It’s the first stadium at the USTA Billie Jean King National Tennis Center to be LEED certified. The accolade was awarded for its practical and measurable initiatives designed to save water, conserve energy and improve both its materials selection and indoor environmental quality.

Fifteen percent less energy and 40 percent less water is used in the new Grandstand than in standard buildings, while also using a rainwater treatment system that removes contaminants from the water before it’s released into the environment. More than 10 percent of the materials used to build the Grandstand was made from recycled materials, while 90 percent of the generated waste was diverted from landfills. Low-fume emitting paints reduce the emission of pollutants, while the white roof reflects heat to keep the stadium cooler.

It’s just a small part of the US Open Green Initiative that’s been in place since 2008 and continues to expand each year. This year’s initiative will offset the carbon emissions from the 850 players and 9,000 employees on site during the US Open, in addition to the fuel used to run the tournament. By diverting more than 850 tons of waste from going into a landfill, more than 1,000 tons of greenhouse gases will be saved from being emitted into the atmosphere.

Other highlights include 12,000 gallons of food grease from US Open kitchens being converted into biodiesel fuel, using only recycled material for the 2.4 million napkins in the general concession area, and installing LED court lights that are 50 percent more efficient than standard stadium lighting. In addition, the US Open expects to donate 10 tons of food to local communities.

The greatest sporting event on earth is now doing more than ever to protect our earth.