By Arthur Kapetanakis, US Open 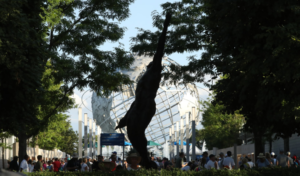 The tennis is played on blue courts, but the US Open is increasingly becoming a green event.

While the tournament celebrated its 50th anniversary in 2018, an unofficial 10-year milestone was also reached one year earlier. The USTA’s sustainability program—heavily rooted at the USTA Billie Jean King National Tennis Center—began in earnest in 2007.

When the Flushing Meadows grounds were renamed after the 39-time Grand Slam champion in 2006, King inquired about plans to lessen the US Open’s environmental footprint. The USTA Board was asking those same questions at the time, according to Lauren Tracy, director of strategic initiatives at the USTA.

“We engaged industry experts to help us develop a comprehensive environmental program for the US Open,” Tracy explained in a recent interview with GreenSportsBlog.com. “Those experts included Bina Indelicato, founder and CEO of eco evolutions, who now serves as a sustainability consultant for the USTA, as well as Allen Hershkowitz, who really pioneered the green sports movement.”

And when the NTC’s five-year, $600-million strategic transformation broke ground in 2013, green initiatives were at the forefront.

“That was always a part of the plan and a part of the conversation for the entire team heading that up,” Tracy detailed to USOpen.org. “Those renovations and new builds would be done in an environmentally friendly and forward way.”

In 2016, the new Grandstand became the first LEED (Leadership in Energy and Environmental Design)-certified professional tennis stadium in the world. There are now three LEED-certified buildings on the NTC grounds, including the Transportation Building and Louis Armstrong Stadium.

The innovative design of Armstrong, in particular, stands out. As the world’s first naturally ventilated tennis stadium with a retractable roof, the 14,000-seat venue eliminated the need for air conditioning, even with the roof closed.

Outside of the NTC, the Welcome Center at the USTA National Campus in Orlando, Fla., is also LEED-certified, and the USTA’s White Plains office is green certified by the Westchester Green Business Council.

A related endeavor is the US Open’s carbon offset program. Initially, to offset the estimated 3.5-million miles that players travel each year to the US Open, the USTA would purchase carbon offsets via wind factories and other means.

For 2018, a more humanitarian approach was introduced: cookstoves were purchased for homemakers in Malawi, where a majority of households cook over unhealthy, inefficient open fires. These open flames produce toxic flames and carbon, harming those cooking—typically women and girls—and the environment at large.

The improved cookstoves save over three tons of firewood and six tons of CO2 emissions each year, while also alleviating health problems in Malawi, where respiratory disease is common.

Also behind the scenes at the US Open, composting and recycling programs have progressed in the last decade-plus. Starting with the kitchens in Arthur Ashe Stadium, the composting program has since expanded to the entire NTC grounds. Since 2008, over 600 tons of food waste have been converted to nutrient-rich compost for gardens and farms, and over 100 tons of food have been donated to local communities.

At the 2018 US Open, 97 percent of waste was diverted from landfills, qualifying the tournament as a zero-waste event. Much of the unrecyclable, uncompostable material was converted to energy at Covanta’s waste-to-energy site in Long Island, N.Y. In addition, over 90 percent of all paper products used at the US Open are made out of recycled and/or compostable materials.

Looking to the future, Tracy is excited about aligning with partners, sponsors and vendors to continue to develop sustainable solutions.

“The whole industry, this whole space has evolved so much,” she reflected. “Some of the things that we wanted to do at the outset were a little more difficult or cost-prohibitive than they are today.”

As technology continues to improve and environmental concerns continue to rise to the forefront of society, look for the US Open and the USTA to build on this work in the years to come.