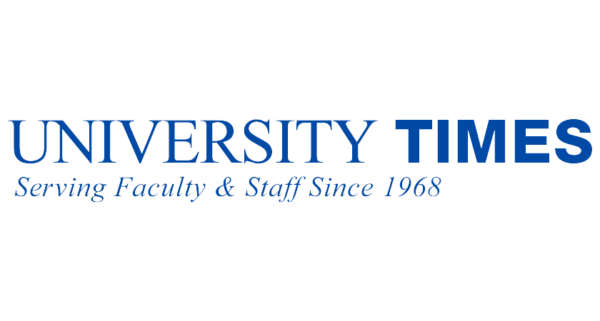 The Board of Trustees on Feb. 26 approved a resolution agreeing with the Ad Hoc Committee on Fossil Fuels’ recommendations that Pitt stay the course to reduce holdings in fossil fuel-related businesses in the $4.7 billion consolidated endowment fund to zero by the end of 2035, instead of the more drastic action long sought by some members of the Pitt community to divest the endowment immediately from fossil fuels.

In a news conference after the meeting, Dawne Hickton, chair of the ad hoc committee, said that because most of the fossil fuel holdings in the endowment are in private equity funds, “the way they are structured, if you were to divest from them sooner than that timeline, it would cause a significant negative financial impact on the endowment.” She said they calculated those losses could be $65 million to $100 million.

Edward J. Grefenstette, who was also on the committee, said that these private equity vehicles include a commitment from a number of limited partners into a fund that can have a fund life of 10 to 15 years, which locks in the investments for that period. The committee with help from Pitt’s chief investment officer established a date far enough out to get past these limitations.

Board Chairman Thomas Richards said the next step is for Chancellor Patrick Gallagher and Hari Sastry, Pitt chief financial officer, to develop a plan of action to move toward this divestment goal. Sastry said those moves can be made by the University without board approval, but the board’s investment committee will be reviewing to “see if we are living up to the intent of our commitments in those options,” Richards said.

At the board meeting and afterward, Richards singled out the students and others who were instrumental in bringing this issue to the board’s attention. “I think they should feel proud of the fact that they were a driving force behind this being moved forward and getting to the board level and getting this level consideration.”

“In particular, we appreciate the passion and dedication of our students who have been tireless for several years and working to elevate this issue to the board for consideration,” he said at the board meeting.

Earlier this week, Elina Zhang, a member of the Fossil Free Pitt Coalition and graduate student in the English department, said the coalition’s members were disappointed by the report.

She also criticized the short window — from its release on Feb. 19 until Feb. 23 — that the Pitt community had to comment on the report. Her group believes the timing of the report’s release was strategic. “We have much less time to really read it and think about it and grapple with it and comment on it.” 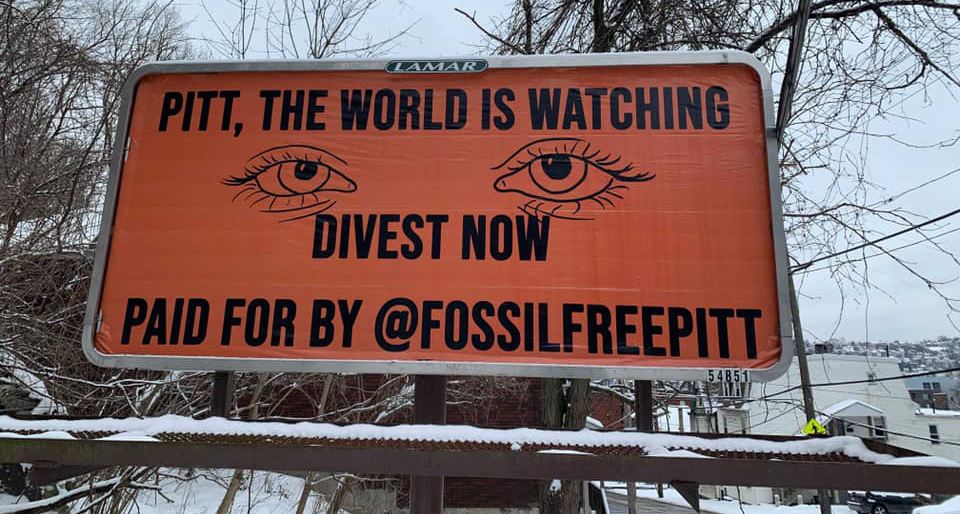 Fossil Free Pitt paid for a billboard at Bates Street and Boulevard of the Allies urging Pitt to divest from fossil fuels.

Last week, Fossil Free Pitt premiered a billboard at Bates Street and Boulevard of the Allies that says, “Pitt, The World Is Watching. Divest Now.” In social media posts, the group listed its demands: “1. Chancellor Patrick Gallagher must immediately call the Board of Trustees to vote for divestment of fossil fuels. 2. Trustees with ties to the fossil fuel industry must abstain from the vote. 3. The Board must involve the input of Pittsburgh community members in reinvestment decisions, including that of the organization who have signed on to support the billboard.”

Zhang said Fossil Free Pitt plans to “continue to call the administration out on this moral and fiduciary failure.” She said they’ve had to get more creative because of the pandemic, but definitely will continue to advocate for divestment of fossil fuel interests.

Richards and Hickton said that the University’s actions on climate change need to be looked at holistically.

The board at its February 2020 meeting committed to carbon neutrality by 2037. The Ad Hoc Committee on Fossil Fuels cited this commitment when it said, “the University’s investment strategy is only a small piece of how the University considers, approaches, and impacts environmental, social, and governance issues, including climate change and fossil fuels. The University’s Sustainability initiatives date back three decades and include both mission-focused and mission-supporting sustainability activities and commitments most holistically framed by the 2018 Pitt Sustainability Plan.”

“It was very obvious through this process, and I could tell that the board could sense this, that it is hard to overstate the deep importance and urgency that our community feels about climate change and the impact it’s having on all of us,” Chancellor Patrick Gallagher said in his remarks to the board. “I just wanted to acknowledge and appreciate those that participated in this process, whether or not your views prevailed or not. It’s through participation and persuasion and education that we make a difference.”

In moving toward zero investment in fossil fuels by 2035, the ad hoc committee said the Consolidated Endowment Fund’s holdings in fossil fuels have decreased 42 percent over the past five years, from 10 percent on June 30, 2015 to 5.8 percent as of June 30, 2020. “

Even though it didn’t recommend immediate divestment, the committee’s report said that existing and new investments that focus on the exploration and production of fossil fuels are expected to continue to become less attractive in the long term, and that the growing focus on greenhouse gas emissions is likely to create new attractive investment opportunities associated with the development of technologies that reduce or avoid greenhouse gas emissions.

The committee’s recommendations that were approved by the board include:

1. Forgo applying a negative screen to the Consolidated Endowment Fund with respect to fossil fuels. The report says: “Applying non-financial constraints to the CEF via a categorical restriction or ‘negative screen’ may generate suboptimal portfolio outcomes.” But later in the same paragraph, it says, “However, adding a negative screen does not necessarily lead to lower returns.”

2. Strongly support the implementation of the University’s current Environmental, Social, and Governance Policy and direct the University’s chief investment officer and investment team to apply ESG considerations to every CEF investment decision. The full ESG policy document is available on the website of Pitt’s chief financial officer, but the core statement is, “In sum, the OOF (Office of Finance) commits to fully integrating ESG (environmental, social and governance) factors into the University’s decision-making processes, on the core belief that supporting responsible business practices also supports strong investment outcomes.”

3. Strongly support the current long-term strategy of the University’s CEF, which is expected to continue to pursue strong risk-adjusted financial returns while reducing private holdings in fossil fuel exploration and production to zero by the end of 2035, as monitored by the Investment Committee.

5. Direct the University to provide greater transparency regarding the fossil fuel investment trends of the CEF. These efforts would include an annual public ESG Report starting in 2021 from Pitt’s chief financial officer, which will highlight the application of ESG considerations in ensuring the consolidated investment fund provides strong financial returns in perpetuity and to fossil fuel investments specifically. The report also supports “regular, clear and accessible University communication, education, and engagement about the CEF’s aggregate status, trends, and current and future fossil fuel exposure (including the basis for any material changes in expectations), including an annual update to the Board and University community.”

Fossil fuel debate has been ongoing

The board’s Ad Hoc Committee on Fossil Fuels was formed in the summer of 2020 by incoming Board Chairman Thomas Richards. It was charged with providing “options on whether, to what extent, and via what methods the University, in its endowment, should consider divestment from fossil fuels in existing and/or future investments.”

The committee delivered its draft report of findings and options to Richards on Jan. 15, after six months of meetings that included interviews with nine subject matter experts, two Open Forums in October, as well as online public comment submissions over a one-month period, and a review of background reference documents and materials submitted via public comment.

At the open forums on Oct. 28 and 30, 2020, several members of the Pitt community asked why it’s taken so long for Pitt to address the divestment issue.

Protests over whether to divest Pitt’s consolidated endowment fund of all investments related to fossil fuels have been brewing for several years and came to a head in February 2020. Students with the Fossil Free Pitt Coalition held a sit-in at the Cathedral of Learning for several days, alumni supporting the coalition met with Pitt administrators to discuss the issue, and the coalition staged a protest at the quarterly Board of Trustees on Feb. 29, 2020, following a similar action at the board’s October 2019 meeting.

“Students have been campaigning for divestment since 2014, and in 2019 in the student government election, 91 percent of student voters voted in favor of divestment, the fact that we are still having this discussion shows just how out of touch the board and the University is with the desires of students,” Annalise Abraham, a junior and student government board member, said at the forum.

In January 2018, Gallagher formed a committee to look at socially responsible investing. That committee released its report in July 2019. It found three main factors for University administrators to consider:

The socially responsible investing report, though, only gave more information to the Board of Trustees, which ultimately has the sole power to make substantial changes to the University’s investments. Gallagher has reiterated this point over the past few years, saying the board has an important “balancing act” to maintain the endowment. Investments should be “as aligned with our core values as possible,” Gallagher said in October 2019, while also maintaining a steady income.

At the February 2020 meeting, the Board of Trustees unanimously approved a formal socially responsible investing process, which gives the chancellor a pathway to bring SRI-related issues from the Pitt community to the board. This process is what led to the ad-hoc committee that will look at divesting from fossil fuels.