University of Minnesota cuts climate-changing emissions by half since 2008

University of Minnesota cuts climate-changing emissions by half since 2008 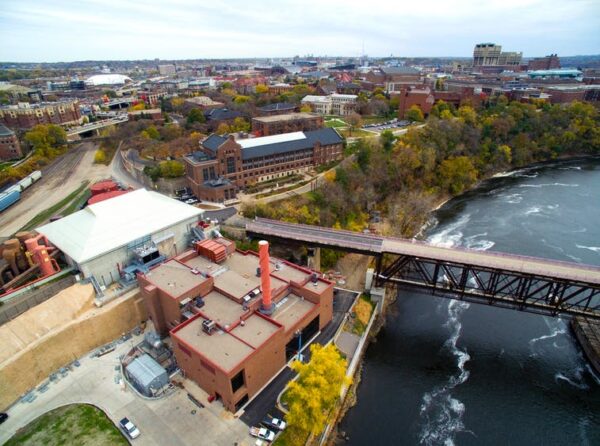 Among other changes, the University of Minnesota transformed the former Old Main Heating Plant, seen in 2016, into a much more efficient facility that generates both electricity and steam used to heat and cool buildings.

The University of Minnesota has hit a major climate target a year early, scoring a Big Ten win in the campaign to slow global warming.

The Twin Cities campus cut its greenhouse gas emissions 51% from 2008 levels last year, a year earlier than its goal of a 50% reduction by 2021. That puts the campus at No. 2 in the Big Ten for carbon cuts, according to Boston-based Second Nature, a nonprofit that works with colleges and universities on climate action and tracks their progress. University of Maryland at College Park ranks No. 1.

About 76 of the 450 campuses that Second Nature works with in the U.S. have hit their reduction goals for planet-warming emissions, Muzzy said.

The U’s results are better than those of the state of Minnesota, which has missed long-standing legislated targets by a wide margin and is scrambling for strategies to catch up.

The U posted the milestone on its website last month. In September, after years of pressure from students, the U disclosed that it plans to withdraw its investments from fossil fuel-related companies in five to seven years.

Shane Stennes, the U’s director of sustainability, said the Twin Cities campus — the largest campus of the state’s flagship school — wants to be an example and resource for other schools, institutions and businesses for taking concrete measures to cut planet-warming emissions. “Aggressive climate action is really needed,” he said.

“The schools of the Big Ten are really taking this seriously,” Stennes said.

Most of the U’s emissions drop came from the low hanging fruit in carbon reduction: energy efficiency and electricity generation. The single largest contributor was transforming the former Old Main Heating Plant on the East Bank into a much more efficient facility that generates both electricity and steam used to heat and cool buildings.That move got the U closer to the goal line, slashing the campus carbon footprint by about 10%, Stennes said.

COVID had little effect on results, he said, because the time period measured ended June 30, 2020, and included only three months of the pandemic slowdown.

The rest of the emissions cuts came from an assortment of strategies, mainly increasing energy efficiency in new and existing buildings and buying and generating electricity from renewable sources. Crews retrofitted older buildings, upgrading to LED lighting and automating building systems to improve performance.

“The HVAC system is by far the biggest user of energy,” Stennes said.

Additional reductions came from the campus participating in community solar gardens and installing solar arrays, including one over the parking lot at the U’s law school, now generating two megawatts of electricity. The effort also benefited from Xcel Energy’s power getting cleaner as the utility generates more of its electricity from renewable sources.

This spring, a sustainability committee will start crafting a new climate action plan for the U’s Twin Cities campus with strategies to drive emissions to net zero by 2050, an enormous challenge.

“The next 50% is harder than the first,” Stennes said.

The next phase will focus more heavily on emissions from transportation — student and employee commutes as well as university-sponsored air travel — and finding ways to heat campus buildings without natural gas or other fossil fuels.

There are myriad opportunities. Take freezers. The campus has many ultra-low temperature freezers for biological samples and reagents used for medical and research purposes, he said. Some keep samples at a chilly minus 80 degrees Celsius.

“Every time we plug one of those in, it’s like adding a house,” Stennes said.

Madeline Miller, a senior at the U and environmental accountability committee director for the Minnesota Student Association, said she’s frustrated by the slow pace of change given the magnitude of the climate crisis and damage being wrought.

“It’s something we should have been taking a lot more aggressive action on way earlier,” Miller said. “Climate change is happening right now.”

“Once we hit 2030 or 2050 … what state is the world going to be in at that point? It’s getting to the point where going carbon neutral is only going to do so much. We need to be going carbon negative.”

Jessica Hellmann, director of the U’s Institute on the Environment, agreed there’s no time for laurels. But the milestone is noteworthy she said because the university is demonstrating concrete actions and measurements that could help other institutions.

“These are actual tons of carbon,” she said.

Mark Muro, senior fellow at the Brookings Institution, said the university is doing exactly what cities, states and other entities need to be doing: setting clear goals, developing strategies to shrink emissions and take inventories of them — getting on the scale to see if the diet is working.

A report out last year by Brookings looked at the 100 largest U.S. cities and found that less than half have set greenhouse reduction goals. Of those that had, 12 met the targets, with two-thirds lagging. On average, the cities had reduced their emissions just 10% from their baselines.

“We have a proliferation of commitments, gestures, pledges and exciting announcements about emissions reductions,” Muro said. “And what we don’t have is rigorous follow-through.”

Minneapolis hit its goal of cutting greenhouse gas emissions 30% by 2025 five years early, in 2020. However, the city’s sustainability director called that a “pandemic-influenced anomaly” and said energy use forecasts indicate the city won’t meet its goal of an 80% reduction by 2050.

About 25 cities around Minnesota have set community-wide greenhouse gas reduction goals, according to Kristin Mroz, GreenStep Cities coordinator with the Minnesota Pollution Control Agency. The voluntary program, a public-private partnership, works with cities on climate goals butcan’t say how many are hitting targets because it doesn’t collect that information.

Muro said universities resemble mini-cities, albeit ones that are centrally controlled, have a good deal of money and resources, and don’t have to deal as frequently with leadership changes.