As part of its campus-wide sustainability efforts, the University of Colorado introduced several new projects in conjunction with the Ralphie’s Green Stampede program introduced in 2008. The projects, aimed at engaging fans and encouraging environmentally friendly practices, were first revealed during the Buffaloes’ September 12 home football opener against Massachusetts. 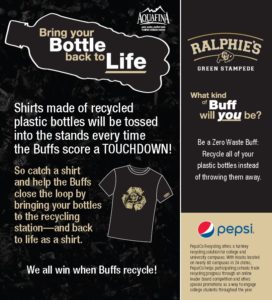 Among the new initiatives are the Bring Your Bottle Back to Life campaign, organized in partnership with PepsiCo. The program, part of a broader goal to achieve a 90 percent recycling rate on the CU campus in Boulder, will distribute free T-shirts made from recycled plastic fibers into the crowd at Folsom Field after every Buffaloes touchdown. The university is also implementing a drive to promote the use of non-motorized transportation and public transportation to arrive at the stadium for gamedays, as well as providing opportunities for fans to pledge their own water conservation efforts at the same time that CU works to balance its water footprint through restoration projects aimed at replenishing 10 million gallons to Colorado watersheds.

“We want to reward our sustainability-minded fans and build a stronger community culture around sustainable practices,” said CU athletic director Rick George about the expanded sustainability focus. “We’re asking our fans to raise their games at home, work and play.”