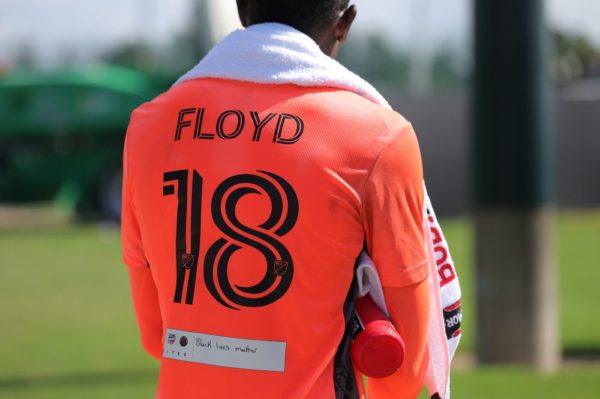 The Union won their opening game of Major League Soccer’s season-resuming tournament Thursday morning, 1-0, over New York City FC. But the highlight was a globally televised protest by the Union against police brutality and killings of Black people across the United States.

Union players wore the names of police-killed victims on the backs of their jerseys instead of their own names. All 23 players eligible to play Thursday — the 11 starters and 12 men on the bench — participated. They also joined a leaguewide demonstration of wearing white strips below their jersey numbers with messages of their choosing.

Defender Ray Gaddis, who serves on the board of the newly formed MLS Black Players For Change group, wore the name of Breonna Taylor, the Louisville EMT who was killed in her home in March. Protests in Philadelphia and nationwide have demanded that the police involved be arrested; they have not been.

Defender Mark McKenzie, also a member of the MLS Black Players group, wore the name of Tamir Rice, who was killed in 2014 in Cleveland. McKenzie’s message below his number was “AM I NEXT?”

Goalkeeper Andre Blake, a Black native of Jamaica who captains his country’s national team, wore the name of George Floyd, whose killing in May by Minneapolis police was the catalyst for this summer’s global outrage over police brutality and institutional racism.

Rookie midfielder Cole Turner, a white native of Churchville, Md., wore the name of Freddie Gray, who was killed in Baltimore in 2015. Turner developed in the Union’s youth academy and backed out of a college commitment to the U.S. Naval Academy last July to turn pro.

Midfielder and team captain Alejandro Bedoya, a New Jersey native born to Colombian parents, wore the name of Walter Scott, who was killed in 2015 in North Charleston, S.C. Bedoya also wore a captain’s armband bearing the names of 30 Black victims of police killings.

Bedoya scored the game’s lone goal in the 63rd minute. A fortunate deflection fell to him at the edge of the 18-yard box, and he took a quick shot that New York goalkeeper Sean Johnson couldn’t stop.

“The idea behind today was action over permission, and I hope that the league understands that,” manager Jim Curtin said. “I hope that everybody can embrace that and wrap their head around that it was done to show respect, to learn, to grow, and to make our country better.”

Union midfielder Warren Creavalle, another member of the Black Players for Change group, thanked his colleagues for their solidarity.

“This isn’t something that myself or any member of the Black community want to take on by ourselves,” he said. “We need everybody to want to step up and want to impact change. It was really great that our teammates, our staff — really, our whole organization — was behind us in the initative that we presented, and today, carried out.”

The Union’s action followed a leaguewide display of solidarity before Wednesday night’s tournament opener between Orlando City and Inter Miami. Black players from across the league ringed the field and raised black-glove-covered fists while the starting players from both teams kneeled at the center circle for 8 minutes and 46 seconds of silence.

“It was a great demonstration from the players and Major League Soccer, the Black players, to bring awareness and to continue to further the conversation about the injustice that continues to happen in present-day America,” Gaddis said.

“Also, to show that we’re using our platform for the right reasons. It was a phenomenal moment, not just for the Black players but everyone who was able to take witness and be a part of it.”

Before that game and this one, players wore T-shirts that Creavalle designed with “Black Lives Matter” on the front and a detailed message on the back that included the phrase “I stand in solidarity with the Black community in the fight against systemic racism.” The campaign will continue across the league through the tournament.

Read the full article from The Philadelphia Inquirer here