By Joey Lin, The Michigan Daily 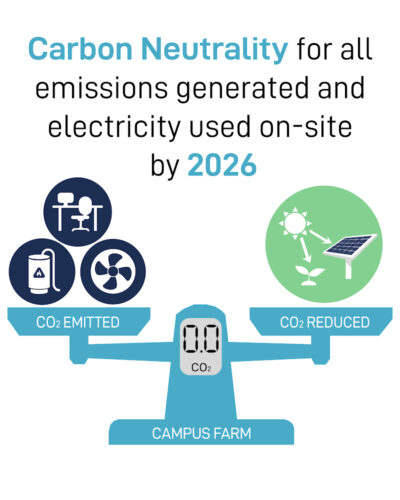 University alum Jeremy Moghtader is the Program Manager for the Campus Farm and has spent over six years working there.

Since the Campus Farm is led by students, Moghtader and other staff on the farm act as mentors to students. Moghtader said students are important in running and sustaining the farm.

“It’s important to note that the farm is really student-directed and student-run,” Moghtader said. “The farm was created by students and existed prior to there being a Program Manager position, and that the students felt like it would be helpful to have somebody … providing mentorship, guidance, and technical expertise.”

The carbon neutrality statement says the Campus Farm will take a data-driven approach to the issue, starting with an assessment of the farm’s total carbon footprint and the largest single sources of carbon emissions in the farm’s operations.

Oriol said natural gas and electric power are the two largest sources of Scope 1 emissions, which are direct greenhouse gas emissions from organization-owned and controlled resources.

“The primary source of our emissions generated on-site comes from the natural gas used for the boiler that heats our Transplant Production Greenhouse and electrical use for our walk-in produce cooler,” Oriol said.

Moghtader said the farm is researching and developing agrophotovoltaic (APV) technology, which is the simultaneous use of land for a combination of solar power generation and plant cultivation.

“Our immediate strategy is to try to offset our carbon emissions through the use of an agrophotovoltaic system,” Moghtader said.

Oriol also said the APV system is and said it will encourage student-led research.

Oriol said designing and implementing an APV system would offset emissions from the natural gas boiler and the cooler, but the work of the farm does not stop there.

“While the APV system is generating clean electricity and offsetting emissions, the farm would also be looking for longer-term solutions that don’t just continue to offset but fully eliminate (carbon emissions),” Oriol said.

In a follow-up email to The Daily, Moghtader wrote that the farm is cutting carbon emissions with a new design for the cooler.

“We are working on a Climate Forward Cooler that takes in cold outdoor air to replace our energy-inefficient cooler compressor system with support from the Planet Blue Student Innovation Fund,” Moghtader wrote.

Moghtader said their primary reason to set such a tight deadline for themselves — only four years from now — is that the farm is gravely concerned with the global threat of carbon emissions.

“We recognize that climate change and carbon neutrality are critically important for sustainability and justice in the food system and in general,” Moghtader said. “We want to be taking proactive steps on our part to make sure that we’re trying to get to that outcome as quickly as we possibly can.”

Oriol said their statement and the goals they set for themselves also act as a reminder to deliver on their promise.

“This vision statement is also a way to hold us accountable for what we want to achieve in these next few years as a University farm,” Oriol said.

Oriol said by committing to carbon neutrality, the farm emphasizes on the other values they have championed at the University, such as Diversity, Equity and Inclusion and Sustainability.

“I also equate upholding carbon neutrality to also upholding the other values … of justice, equity, diversity and inclusion, and sustainability,” Oriol said. “Because you can’t commit to and achieve carbon neutrality without deeply considering and incorporating those values.”

Moghtader said students who work at the Campus Farm are committed to achieving carbon neutrality with the limited resources that they have.

“They wanted to use the physical footprint of the farm for carbon neutrality, they didn’t want to say, ‘Oh, well, we’ll plant trees in some other place,’” Moghtader said. “They said, ‘we have 10 acres, how can we be carbon neutral as best as we can, using our existing footprint?’”

Oriol, who applied to the Campus Farm through the Matthaei Botanical Gardens’ Nature Academy internships, recommended a few ways the average student can get involved with the farm’s carbon neutrality efforts.

“If a student is interested in being part of the cause of carbon neutrality, the most direct way to ask questions or get involved would be our email,” Oriol said. “There is also an organization called Friends of the Campus Farm that hosts volunteer workdays.”

Oriol said the campus farm staff is excited to release a formal carbon neutrality statement for the Campus Farm and wish to see that their work can inspire others.

“I’m very excited to see the work that students are going to be doing to help this farm achieve carbon neutrality and perhaps be a place of inspiration for other small-scale farms to (reach that goal),” Oriol said.

Daily Staff Reporter Joey Lin can be reached at joeyylin@umich.edu.