UEFA/WWF report – ‘Playing for Our Planet’

UEFA/WWF report – ‘Playing for Our Planet’ 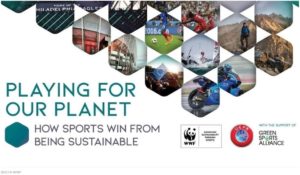 A report by UEFA and its associated social responsibility partner World Wide Fund for Nature (WWF) describes the way in which sport can contribute to sustainability, and examines the link between sport and environmental issues.

A new report by UEFA and its associated social responsibility partner World Wide Fund for Nature (WWF) shows how sport can contribute to sustainability and tackle climate change at all levels, from the grassroots to the elite.

The report, ‘Playing for Our Planet’, focuses on environmental initiatives taking place across sport in Europe and beyond, and has been produced by UEFA and WWF in collaboration with the Green Sports Alliance.

It highlights good practices in sustainable sports to emphasise the commitment made by many sports to local communities and the planet.

The report examines the link between sports and environmental issues, and stresses the impact that the sector has, as well as its unique power to raise awareness and promote sustainability to fans in Europe and beyond.

‘Playing for Our Planet’ features 25 examples of sports stakeholders, including UEFA, who are committed to reducing the environmental impact of their operations – leading by example in the fight against pressing environmental challenges, such as climate change and ocean plastics.

“The activities showcased from around Europe show a great innovative spirit, and demonstrate that sport can contribute to sustainable causes at all levels,” says UEFA President Aleksander Čeferin.

“Sustainability is one of the most significant issues facing decision-makers and opinion leaders in sport as they prepare for the future,” he added.

Sports stakeholders are being called upon to step up their efforts to reduce their environmental impacts and use their unparalleled reach to encourage sustainability.

“From a Sunday kickabout in the park to grand tournaments, all sports rely on nature’s bounty,” says WWF global partnerships director Jochem Verberne.

“And all sporting organisations have a responsibility to care for the environment and inspire millions of fans and players around the world about sustainability and nature.”

Alongside European stakeholders, the report also covers their counterparts in North America to emphasise the link between global and local concerns.

Backing for the report has come from the European Commission and the United Nations Framework Convention on Climate Change (UNFCCC) – showing that united cooperation between public institutions and the sports movement is key in efforts to protect the planet.