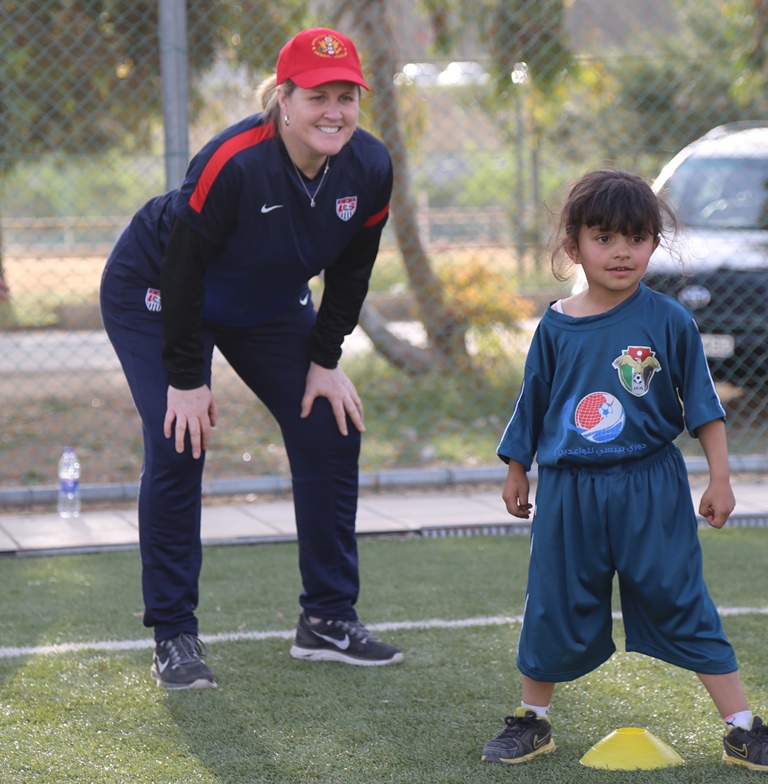 As U.S. Soccer’s highest honor, the Werner Fricker Builder Award is given to an individual or group of individuals who dedicate at least 20 years of service to the sport, working to establish a lasting legacy in the history and structure of soccer in the United States. The award recognizes those who have developed programs that will outlast their own involvement in the sport. Harvey becomes the first woman to receive the award since its inception in 2002.

“It’s a great pleasure to present the Werner Fricker Builder Award to a member of our first FIFA Women’s World Cup title team and someone who has dedicated her life to positively impacting the game,” said U.S. Soccer President Sunil Gulati. “Mary’s determination over the past three decades has paved the way for the advancement of youth and women’s soccer, not only in the United States but across the world. Her work reflects her passion for the game, which transcends the sport to our everyday society. Her legacy as an all-star on and off the field will be cemented into U.S. Soccer’s foundation for many years to come.”

A member of the U.S. Women’s National Team from 1989-1996, Harvey played a pivotal role in the USA’s first Women’s World Cup title at FIFA’s inaugural world championship for women’s soccer in 1991. The USA set the standard for future U.S. teams, defeating Norway, 2-1 in the title game played in Guangzhou, China. Harvey played every minute of all six games in goal and recorded three shutouts. She finished her National Team career in 1996 on a high note after winning a gold medal at the 1996 Olympics in Atlanta, Georgia.

“I am honored and humbled to receive this award, and to be selected by a committee of such esteemed builders of the sport themselves,” said Harvey. “It is particularly meaningful to receive the award bearing Werner Fricker’s name. A giant of the game, Werner was the President of the Federation when I first made the National Team, and I had the pleasure of serving with him on the U.S. Soccer Board of Directors.  To receive this recognition is a tremendous honor, particularly in light of the many others who have given so much of themselves to the game.”

Named the 1986 National Goalkeeper of the Year, Harvey played for the University of California-Berkeley from 1983-1986. She graduated in 1987 with a bachelor’s degree in business administration and was later inducted into the Cal Athletic Hall of Fame in 2000.

Harvey was one of the first American female players to ply her trade overseas, moving to Germany in 1988 where she played with FSV Frankfurt in the new Damen Bundesliga. She won the German National Cup in 1990 and the Bundesliga Championship for the southern division in 1991. She then transferred to Hammarby IF in Stockholm, Sweden for the 1993 season, before joining U.S. teammates Michelle Akers, Julie Foudy and Kristine Lilly at Sweden’s Tyreso Football Club in 1994.

Off the field in 1992, Harvey was elected by fellow players to serve on the U.S. Soccer Board of Directors as their representative. She would go on to serve for the next 11 years, including five years on the Executive Committee. She became a player advocate, establishing the U.S. Soccer Athletes’ Council and leading the task force charged with writing the U.S. Soccer Player Bill of Rights.

After completing her MBA and working in the management consulting industry, Harvey was hired in 2003 by FIFA to lead its Development Division – the first woman to lead a division for soccer’s international governing body – overseeing a quadrennial budget of $640 million and team of 70 people located in 13 offices around the globe.  She held the role until 2008, and some of her many accomplishments during her five-year tenure include implementing extensive reforms to FIFA’s financial assistance program, convincing senior leadership to establish the U-17 Women’s World Cup, and creating incentives to establish sport legacy programs for countries applying to host FIFA’s women’s competitions.

Harvey’s work at FIFA eventually led to being appointed Chief Operating Officer for Women’s Professional Soccer, a role she held from 2008 to 2010. During that time, she brought league operations from startup to full operation, led the process to implement operating standards for all teams and the signing of all 150+ players into the league.

In 2012, she founded Ripple Effect Consulting, a consultancy for organizations using sport to drive social and environmental change. Through this agency, Harvey has influenced a variety of organizations, from FIFA to the U.S. Department of State. At FIFA, she helped drive the #WomenInFIFA campaign, a global media campaign calling for gender equity and inclusion as a core tenet of reform at the sport’s governing body. As a Sport Envoy for the U.S. Department of State, Harvey has led multiple sport diplomacy missions to the Middle East, engaging local communities to promote acceptance and inclusion of refugee and marginalized populations, as well as empowerment and access to sport for women and girls.

An active environmentalist, Harvey is also the Vice Chair of the Board of Directors for the Green Sports Alliance, a US-based non-profit dedicated to inspiring professional sports leagues, teams, venues, their partners and fans to embrace renewable energy, healthy food, recycling, water efficiency, safer chemicals and other environmentally preferable practices.