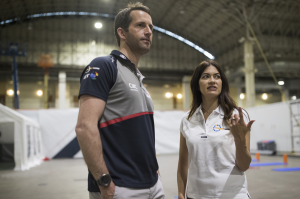 Eco-athletes—sports figures who take on environmental issues—are a rare breed as compared to athletes who get involved with causes like cancer, domestic violence, and, increasingly, racism. There are several oft-cited reasons: environmental topics can be overly complex; the political nature of “green” issues can be daunting to some athletes; and the relative lack of financial muscle behind environmental causes means athletes often look to those that are better funded.

But there are athletes who, despite the obstacles, take a strong stand on behalf of environmental issues. Two such eco-athletes, Sir Ben Ainslie, skipper of Land Rover BAR, Britain’s challenger for the 35th America’s Cup, and Leilani Münter, the self-described “Eco, Vegan, Hippie Chick with a race car,” met up at an America’s Cup prep race in Chicago in June. They shared the challenges and opportunities around making their sports and teams more sustainable; why sustainability, the environment and climate change resonate with them; and how they can potentially learn from each other.