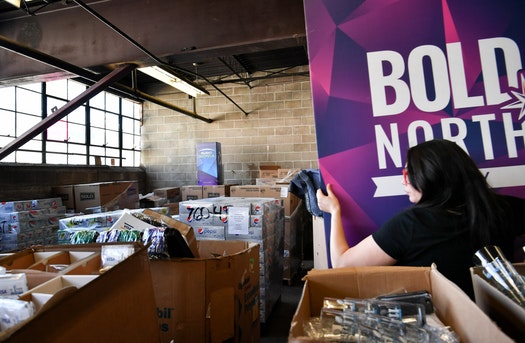 The Salvation Army is acting as a distribution hub for Super Bowl LII leftovers. Above, marketing director Michelle Wong with some of the donated items and food. Photo Source: Star Tribune

What could have become a giant dump of Super Bowl leftovers from U.S. Bank Stadium, the Convention Center and Nicollet Mall is instead being reused and repurposed by more than 20 local charities.

The Salvation Army has collected more than 1 million square feet of mesh fencing, banners and carpeting used before and during the Super Bowl and is distributing the materials to other local charities.

Then there’s the miscellaneous — the Kitten Bowl set, pallets of hand warmers, food and beverages, and supplies such as desks, pens, pencils and Post-it notes for more than 100 offices in the temporary headquarters.

“No one wants to take those supplies back with them, so we donate them to charities to use in classrooms,” said Jack Groh, director of the NFL Environmental Program, which facilitates the material recovery project. “It’s more than 2,000 pounds of supplies.”

More than 16 months ago, the National Football League’s Environmental Program began building a network of charities to use Super Bowl leftovers instead of sending them to the landfill.

“We’re the first pro sports league to do this,” Groh said. ”The initiative started 25 years ago and now we do it at major sports events like the Super Bowl, the Pro Bowl and the draft.”

The Twin Cities Salvation Army took the lead by acting as a distribution hub for nearly all the items. It used most of its fleet of 18 donation trucks to collect the materials from four major sites and transported it to its warehouse and store at 900 N. 4th St. in Minneapolis. From there, the other 21 charities could pick up what was useful for them.