Tokyo to Build Eco-friendly ‘Solar Roads’ Ahead of 2020 Olympics

Tokyo to Build Eco-friendly ‘Solar Roads’ Ahead of 2020 Olympics 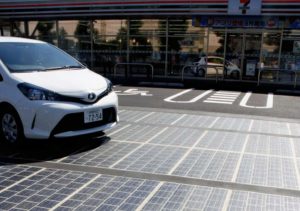 The Tokyo metropolitan government plans to introduce “solar roads” that collect energy from the sun via solar panels installed beneath the surface of the roads.

The effort is aimed at promoting Tokyo as an eco-friendly city, both domestically and abroad, ahead of the 2020 Olympics and Paralympics.

The new technologies are expected to be introduced on a trial basis at facilities owned by the Tokyo government and other locations as early as the next fiscal year.

In May a solar road was installed in a car park of a Seven-Eleven store in Sagamihara, Kanagawa Prefecture.

The solar road comprises of a system of solar panels installed on the road, with the surface of the panels covered with a special resin to enhance durability. It is possible for vehicles to drive over the panels. Solar roads have already been introduced on motorways in France and on cycling roads in the Netherlands.