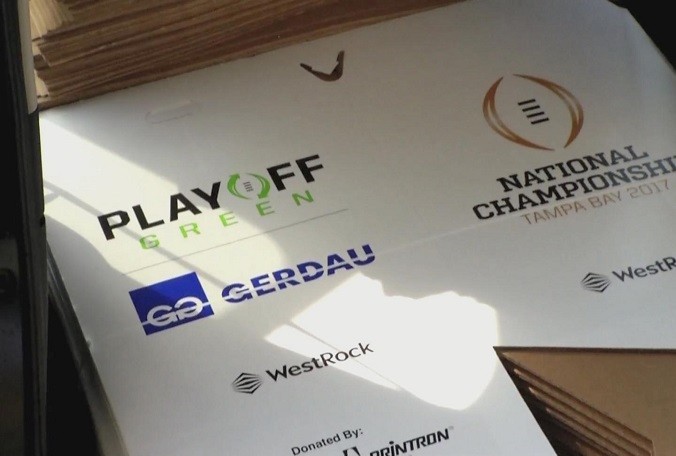 Customized CFP recycle bins will be used around Raymond James Stadium on gameday.

There will be plenty of action Monday night at Raymond James Stadium.

But there also has been plenty of action behind the scenes as there has been a “green” push on for the College Football Playoff Championship Game.

The initiative is a project started by the College Football Playoff to make sure the Bay area environment is not impacted negatively by the big game.

“What we’re trying to do is address all the different environmental impacts of the game,” said Jack Groh with Playoff Green Project. “We address things like food waste, solid waste, green energy, we do some work with urban forestry, too, and material donation.

“All the beautiful stuff that you’re going to see all over the Tampa Bay area. The décor and all the stuff built up, all that gets donated to local nonprofits so it can be repurposed and reused.”

Part of that is customized CFP recycle bins that will been seen around Raymond James Stadium on gameday.

Another part of the environmental effort is to salvage left over food from the events across town during the days leading up to the game. The food will be collected and distributed to local agencies.

“We will send our agency partners to pick it up,” said Jayci Peters with Feeding Tampa Bay. “So the fact this is a week long initiative and it’ll wrap up next Monday, it’s just going to be a really big week for the Food Bank. I know for the National Championship game coming into town, it’s a big deal and hunger is a big issue in our community.”