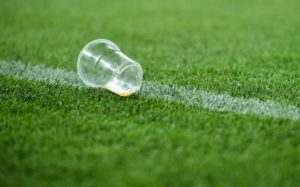 Even in the greenest cities in the United States, sporting events are sure to feature the distribution of tens of thousands of single-use plastic water bottles. Bottled water has become the top-selling beverage in the United States (passing soda in 2016), and sports fans are guzzling it down. According to Waste Management, each year the country’s top 200 stadiums draw more than 180 million visitors, and “the NFL, MLB, NBA, and NHL generate a combined 35,000 metric tons of CO2 each year from their fans’ waste.” Add to that college sports—NCAA reported 36 million–plus for college football Saturdays alone last season. Add to this basketball, track and field, soccer, baseball, high school sports, with each venue’s concessions relying heavily on disposable single-use plastics.

Worldwide more than a million plastic bottles are produced every minute. Last year, according to Bloomberg BNA, 55 billion water bottles were made in the U.S. alone. According to the EPA and the journal Science Advances, less than 10 percent of all plastic is recycled.

To their credit, many teams have started recycling on a large scale. In 2017, the Seattle Mariners recycled 96 percent of Safeco Field waste. While laudable, recycling should remain the last option. The real solution lies in changing consumer habits so as not to produce the waste in the first place.

Sports waste is a vast problem, but the solution to the plastic water bottle scourge is readily available: Water bottle refill stations (also known as hydration stations) are essentially modernized water fountains, featuring a single or multiple faucets. And they’re poised to play a big role in the sport venues of the future. Many are already making the switch.