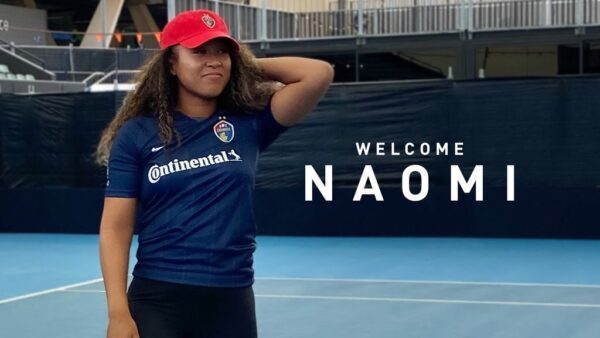 CARY, NC (Jan. 28, 2021)- Global sports icon and tennis superstar Naomi Osaka has invested in the North Carolina Courage, the club announced today. Naomi is the first investor in the Courage since Steve Malik acquired and relocated the team to North Carolina in 2017.

Named Forbes’ Highest Paid Female Athlete in 2020, Naomi is showing her commitment to inspiring the next generation of female athletes by investing her time and money into one of the best women’s professional soccer teams in the world.

“The women who have invested in me growing up made me who I am today and I cannot think of where my life would be without them,” said Naomi. “My investment in the North Carolina Courage is far beyond just being a team owner, it’s an investment in amazing women who are role models and leaders in their fields and inspirations to all young female athletes. I also admire everything the Courage does for diversity and equality in the community, which I greatly look forward to supporting and driving forward.”

Naomi, the daughter of a Haitian father and Japanese mother, was the first Asian player to hold the No. 1 ranking in singles and the first Japanese player to win a Grand Slam. The 23-year-old was named Sports Illustrated Sportsperson of the Year in 2020 for both a strong showing on the court and her off-the-court activism. Naomi, like the members of the NC Courage, used her platform in 2020 as a stage for social activism in support of the Black Lives Matter movement.

“I am thrilled to welcome Naomi as an owner of the North Carolina Courage,” said Malik, Chairman of the North Carolina Courage. “Naomi embodies the values we have been striving to cultivate at our club, and she brings an invaluable viewpoint on topics beyond sports. I cannot think of anyone better to help us as we continue to make a difference in our community and inspire the next generation of women.”

In terms of competitive achievements, parallels can be drawn between Naomi and the team in which she has invested. The two are no strangers to success, as Naomi has won three Grand Slam titles (2018 US Open, 2019 Australian Open, 2020 US Open) and the Courage have won six trophies in four years (two NWSL Championships, three NWSL Shields, and the Women’s International Champions Cup).

The Courage are part of the largest youth to professional soccer club in the U.S. with over 13,000 players, which aligns organically with The Naomi Osaka Play Academy, an initiative that aims to change girls’ lives through play and sport. Naomi’s program is part of Nike’s Made to Play commitment to get more kids moving around the world. The Play Academy provides a fun, positive experience for young girls with a focus on gender-inclusive coaching and programming to help break down barriers for girls in sports.

“Naomi is the perfect fit as an owner because her values sync so well with our club,” said North Carolina Courage President and General Manager, Curt Johnson. “A team with an exemplary and trailblazing roster of world-class professional athletes supported by a globally influential icon is a seminal moment for our sport and the Courage organization.”

The Courage are also looking forward to harnessing Naomi’s passion and talent for fashion, with plans to incorporate the tennis star into its design decisions in 2021.

About Naomi Osaka
Naomi Osaka is one of the most explosive and influential tennis players of all-time, and the first Asian player to hold the No.1 ranking in singles and the first Japanese player to win a Grand Slam. In 2013, Osaka entered the WTA professional circuit as a rising star quickly gaining fans and media attention through her powerful serve and strong forehand. Two years later in 2018, Naomi had one of the strongest seasons to date, winning 2 Grand Slams. In 2020, Osaka won her second US Open title capturing the world’s attention against the backdrop of a pandemic and social unrest. In 2020, Osaka was named Sports Illustrated Sportsperson of the Year, Ad Weeks Most Powerful Woman in Sports, Forbes Highest Paid Female Athlete of all Time, and one of Time Magazine’s 100 Most Influential People. Her name also became known as a voice in activism on and off the court with bold statements publicizing the names of victims of police brutality and shining a light on social inequality in our nation. 2020 also highlighted Naomi’s love for all things fashion as she appeared at New York Fashion week for the first time, showcasing a collation she co-designed with Adeam. In addition, Osaka continues to pursue her love of art, fashion, and design with a second collection with Adeam and Mastercard based on the cities in Japan. Osaka’s various brand partnerships include Nike, Mastercard, Beats, Nissan, PlayStation, and Louis Vuitton which make her the world’s most marketable athlete. Naomi is the proud daughter of a Haitian father and Japanese mother and was born in Osaka, Japan. She moved to the United States with her family at the age of 3. She represents Japan in competition and will be the face of the Tokyo 2020 Olympic Games. Osaka currently resides full-time in Los Angeles, CA.