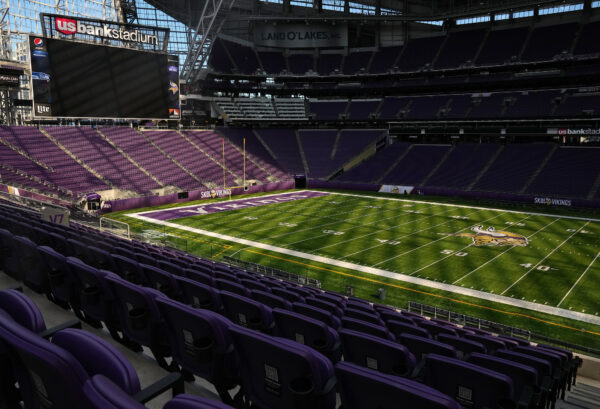 Vikings welcoming back big crowd while invoking past glories

Back when the Vikings played outdoors at the old Met Stadium in Bloomington and the afternoon sun began its slide, the storied front four known as the Purple People Eaters would begin a low, slow incantation to Odin, the Norse god of war.

According to team lore, the temperature on the field would plummet by double digits when the sun disappeared, smacking opponents with a deep chill and an unsettling sense of the supernatural powers of the Vikings’ defensive line.

For their first U.S. Bank Stadium game before a full house since December 2019, the Vikings on Sunday will conjure the power of their past when retired All-Pro defensive end Jim Marshall recounts the story of Odin in a pregame show designed to prompt a rafter-rattling Skol chant by a near-capacity crowd anticipated to be about 67,000.

After last year’s eerie, depressing home games featuring empty purple seats owing to COVID-19 restrictions, the Vikings are welcoming fans back in a fashion that the team’s staff compares to the stadium’s grand opening in 2016.

“What an NFL football game is really about is the camaraderie, the energy, the roar of the crowd, and that’s what we can’t wait to hear again,” said Greg Bostrom, director of entertainment for the Vikings.

Sunday will mark 636 days since U.S. Bank Stadium was last near capacity for a game against the Chicago Bears, in late 2019. The pandemic mostly shuttered the stadium for all of 2020, and though the Vikings had two home preseason games in August, about a third of the seats were empty.

State COVID restrictions are now gone, and the Vikings aren’t requiring proof of vaccines or negative tests to get into the stadium Sunday. But the situation “remains fluid” for future games, team COO Andrew Miller said. Vaccine clinics outside the stadium are planned for home games on Oct. 3 and 10.

For Sunday’s game against the Seattle Seahawks, the Vikings are “strongly encouraging” fans to wear masks inside the stadium but won’t be enforcing compliance, Miller said.

An indoor arena with an outdoor feel, U.S. Bank Stadium has a state-of-the-art air purification system that was installed in 2019. The Atmos­Air Solutions bipolar ionization purification system operates throughout the building to break down bacteria, mold and viruses.

Fifty-six units in the building treat the air, including 30 that treat 50,000 cubic feet of air per minute in the lower seating bowl of the stadium, according to Curtis Schmillen, the stadium’s director of operations at ASM Global.

“It’s just another tool with all the other stuff we’re trying to do to keep people safe,” Schmillen said.

As for the fans, they appear ready to return. The Vikings reported a 99% season ticket renewal rate among their fan base. But state Department of Health spokesman Doug Schultz said fans should remember that COVID transmission occurs at gatherings, that “large gatherings are riskier than small gatherings” and that activities that were risky before vaccination remain risky afterward, albeit less so.

There also have been changes at U.S. Bank Stadium in terms of food options, which were rolled out and sampled Thursday by reporters and staffers. The Vikings’ collaboration with local celebrity chef Andrew Zimmern is out while Rusty Taco is in, along with Philadelphia-based Chickie’s & Pete’s, known for its crabfries, cheesesteaks and chicken.