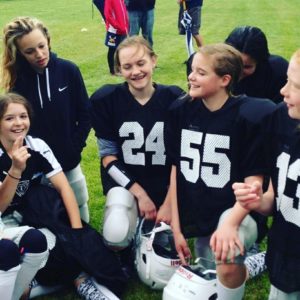 On numerous fields across the state of Utah this season, more than 300 young girls will gather to participate in a sport that they’ve traditionally not been allowed to play: football.

And it all started with Sam Gordon.

At just 9 years old, she caught the attention of millions of people when a 2012 video of her playing on a football team with boys went viral. She scored 35 touchdowns, rushed for 1,911 yards, and racked up 65 tackles.

Since then, Gordon has used her internet fame to speak at schools to share her story. At a middle school in 2015, she asked a group of girls a simple question: How many of you would play football if given the chance?

“Basically every girl’s hand in the audience went up,” Gordon, now 14, tells GOOD. She took it upon herself to start an all-girls football league, and with the help of her parents, the Utah Girls Tackle Football League (UGTFL) was born.

“We thought [that] if there’s this many girls in this assembly who want to play football, imagine how many there are in Utah or the entire country.” she says.