Sports events are starting to play a huge role in keeping the planet healthy. 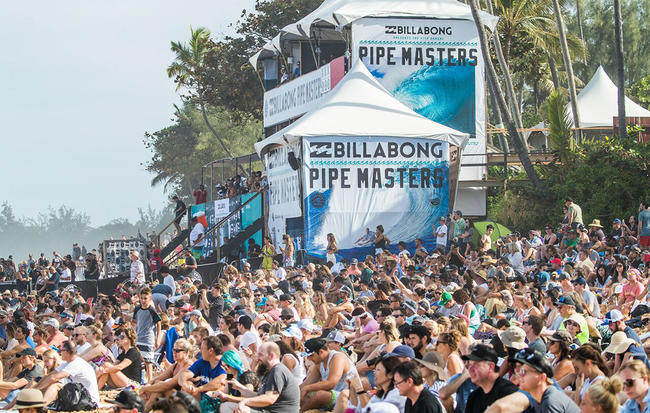 Along the side of the dirt road at Waihuena Farms, this small-scale organic farm on the North Shore of Oahu is making what one of its farmers calls, “boutique, artisan compost.” Using a Japanese composting technique called bokashi, staff and volunteers mix food waste with a brew of microorganisms, pickling the food and creating a potent fertilizer that feeds the farm’s plant beds.

But the organic waste isn’t just scraps from the farm and landscapers around the island. In November and December, over 3,000 pounds comes from the Vans Triple Crown of Surfing, a premier three-event series of professional surf competitions that draws tens of thousands of people to the North Shore every year. The City and County lifeguards of Honolulu estimate that on competition days, an average of 25,000 people can pack the beach to watch the world’s best surfers in action.

However, the increase in visitors also brings a surge in trash, putting a strain on the island’s waste management system and natural resources.

Waihuena Farms is part of a unique partnership between Vans and Sustainable Coastlines Hawaii, a local grassroots nonprofit organization, to decrease the impact of the Triple Crown on the island state and the environment. “Our goal is always to leave no footprint behind,” says Kim Matsoukas, Senior Manager for Sustainability and Social Responsibility for Vans.

Through a full-scale waste management system, they divert approximately 65 percent of overall waste from the Triple Crown away from landfills and incinerators a year, an increase from 29 percent in 2013.

During the competition period, Sustainable Coastlines sets up bins on the beach and regularly sorts and empties the trash. To encourage people to sort their trash into the proper waste stream, the bins are clearly labeled—recycle, compost, and trash. All approved caterers and food vendors don’t sell single-use plastic bottles and are required to use compostable plates and utensils.

Then, the utensils, napkins, food containers, and food waste are collected and taken to Waihuena Farms, chipped down, and added to the compost piles and into the garden. “This is where Ke Nui Kitchen sources a lot of their food, which they then feed back to the competitors at the Vans Triple Crown,” says Kahi Pacarro, Executive Director of Sustainable Coastlines Hawaii. Even the cardboard from the events are used as weed mats on the farm to kill weeds and prep the soil for planting. Plus, since there are no commercial composting facilities on Oahu, the partnership helps return some of the natural resources back to the island.
Read the full article.
Natalie2018-01-22T18:48:16-06:00