The Story Of The World’s First Vegan Sports Team

The Story Of The World’s First Vegan Sports Team 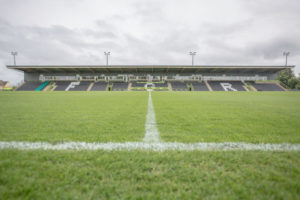 The menu at sports events has traditionally been a bit limited … and unhealthy.

Especially at soccer games in England.

His team is broadening its menu with healthier fare. But that’s just one part of a much larger mission.

In 2010, Forest Green Rovers, then a fifth-tier football club in Nailsworth, England, was in financial trouble. Dale Vince, who loved the sport as a kid, was approached by the team.

“They said they needed a little bit of help to get through the summer,” Vince says. “And I thought it would be a nice thing to do — because we could, so we should. But within a couple of months, it was clear that they needed much more than just a little bit of money.

“And they said to me, ‘You really need to be the Chairman.’ And I said, ‘I really don’t. I’ve got so much else to do.’ But I then faced the choice — if I walked away, they would fold.”