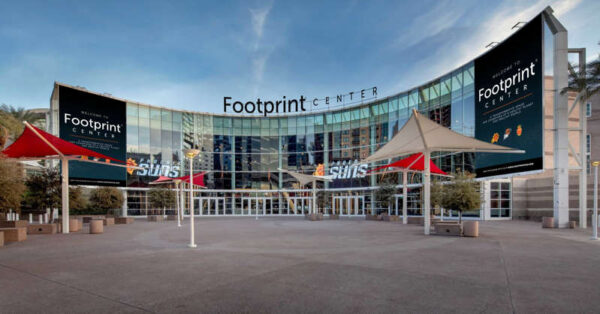 When the Phoenix Suns open the 2021-2022 NBA season at home on Oct. 20, fans will likely notice the new banner hanging from the rafters celebrating the Suns’ run to the 2021 NBA Finals.

They might also notice that their drink is in a biodegradable, compostable cup made from plant materials, as well as the recycling and compost cans that now dot concourses as opposed to garbage cans.

Those changes are the result of a new naming rights partnership with Footprint, the material science technology company that has set a goal of eliminating single-use plastics — typically a very common sight in an arena between beer cups, food trays and containers, and plastic silverware and straws.

“We’re not only having a tip-off; we’re having a tipping point of change,” said Footprint chief marketing officer Susan Koehler. “We believe this venue will transform and show the world how to go plastic-free.”

Organizations across all industries are making massive investments towards achieving environmental, social and governance-related goals, and that includes professional sports. Leagues like the NFL and NBA now have sustainability-focused programs, LEED certification is nearly a given for any new stadium development, and NHL and MLS teams have worn Adidas jerseys made from recycled materials to both reduce environmental impact and raise awareness.

“We have a responsibility to play a role in our communities and to make them better places to live,” said Dan Costello, Phoenix Suns chief revenue officer. “It’s possible to do good and do well at the same time.”

There are few better ways for a sports team to signal a commitment to sustainability than through a stadium naming rights deal, its most visible and lucrative corporate partnership that can bring in upwards of $10 million a year in some NBA markets. Terms of the Footprint deal were not disclosed, but the company was reportedly seeking at least a 10-year deal worth $9 million annually, according to the Sports Business Journal.

“We’re not just choosing businesses just around taking a check; we really focus on businesses that fit the personality of who we are as a team, which is being known for innovation and technology,” Costello said. “Environmental and social governance is important to us, and we know they mean something to other companies — we’re trying to create a place where they can come and share those stories too.”

The Suns have looked to embrace sustainability before. Their arena was one of the first in professional sports to add solar power, back in 2012. The arena has also adopted other environmentally friendly practices like using LED lighting and having touchless faucets and toilets to conserve water.

Telling the story of what can be done now and in the future around sustainability at an arena is the goal for the Footprint Center, which is also the home to the WNBA’s Phoenix Mercury, said Koehler. The partnership also includes Real Mallorca, the Spanish soccer club owned by Robert Sarver, the chairman of both the Suns and Mercury.

“There are 41 NBA home games, but there’s Mercury games, other sporting events, concerts, Disney On Ice, conferences,” Koehler said. “It’s an opportunity to invite the public in the state and around the world to experience what sustainability looks like.”

The first change will be the removal of single-use plastic items like plates, packaging, and utensils for Footprint’s recyclable and compostable plant-based fiber products. Garbage cans will also be replaced with recycling and compost containers. Additional Footprint products will be added over time, as well as other sustainability-focused practices.

The arena will also serve as a “living innovation lab,” Koehler said, where other companies can learn more about how sustainability efforts are being received by tens of thousands of people each night.

Footprint and the Suns are aiming to get fans involved, from videos talking about sustainability and how to manage their trash on the giant scoreboard during games, to encouraging people to sign up for a climate pledge initiative to cut plastics from their lives. The Suns and Mercury will also encourage players to take part in the pledge, as well as other entertainers who perform in the arena.

Koehler said she hopes the arena further pushes sports into a more sustainable mindset and future. She said Footprint, which ranked No. 45 on the 2021 CNBC Disruptor 50 list, has already fielded several calls from sports teams across the U.S. and globally since this deal was announced about what could be done around sustainability in their arenas and stadiums.

“The sports industry is going to start seeing that there is this movement around sustainability and what it means to be a part of it — I think all stadiums are going to see it as something they have to do and there will be minimum bars of transparency of what that means,” Koehler said. “You see how consumer attitudes are changing in relation to companies and brands regarding sustainability and they’re basically saying, ’we will reward the companies that make the change, and [those companies] should have a responsibility to care for the planet and its people.”

Wong also pointed to Climate Pledge Arena in Seattle, for which Amazon purchased the naming rights for upwards of $300 million over the life of the deal in in August 2020. Instead of putting its corporate name on the building, Amazon dedicated it to bringing attention to climate change. The arena, which will be home to the NHL’s Seattle Kraken, is aiming to be the first zero-carbon arena in the world, powered by renewable energy, and is also aiming to rid itself of single-use plastics by 2024.

In October 2020, Ball Corp. acquired the naming rights to the Denver arena that the NBA’s Nuggets and NHL’s Colorado Avalanche call home, partially in an effort to further showcase its plan to replace plastic products with its recyclable aluminum ones.

Putting that message more in front of the fans is not only a change for the sports teams but also for companies like Footprint, said Kristin Hanczor, Green Sports Alliance senior partnership manager.

“Before this year, you wouldn’t have ever stepped foot in an arena where you used the word climate or Footprint — this is all new for sports fans,” she said. “This is also a key piece for those companies to tie their name to a sports team and really tell fans why they are there.”

The ability to use sports as a vehicle to have more people think about sustainability is something not lost on Koehler, as fans now will be cheering in an arena with the company’s name on it.

“We love our sports, Americans love their teams; if we can help educate fans on how they can make a difference and we make it interesting, there’s an opportunity for a widespread transformation,” she said.

Footprint co-founder & CEO Troy Swope will be among the speakers and panelists at this year’s Disruptor 50 Summit — CNBC’s annual celebration of the next generation of great public companies. Register to join us here.