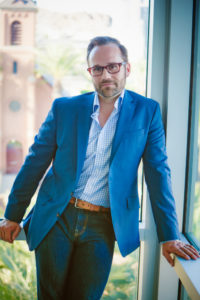 Colin Tetreault of Arizona State is both a Green-Sports visionary and top-level practitioner. This was made clear when he moderated the Thought Leader panel at the Green Sports Alliance Summit in June. Next up, thought leadership-wise, for Tetreault is a home game of sorts: the Sports & Sustainability Symposium at ASU this winter. GSB spoke with Tetreault in a two-part interview.

In Part I, Tetreault shared how his love for nature and Arizona State University led him to be a sustainability leader in Phoenix city government. Today’s Part II delves into Tetreault’s journey back to ASU, where is he is helping to turn the school into a Green-Sports leader.

We pick up the conversation as Colin Tetreault sums up his experience as Phoenix’ first sustainability director and then returned to Arizona State.

GSB: Kudos to you and your colleagues in Phoenix. You really made a difference! What did you do after the City began to embrace sustainability as a driver?

Colin: My job was to be a catalyst. By nature, catalysts drive change and then disappear. We hired a Chief Sustainability Officer and moved the full-time work to a great team in the City Management. That, in and of itself, was a statement on how the City shifted from where it had been two-years prior.

I went back to ASU, and that’s when the sustainability and sports link really began to accelerate. We began teaching a Sport & Sustainability class. Dawn Rogers, who was President and CEO of the 2017 Men’s Final Four in Phoenix, came to us and asked us “What should a mega-event like the Final Four do from a sustainability perspective?” Well, we went into overdrive, putting together a Sport and Sustainability Dream Team of state leaders with the goal of leaving a strong sustainability legacy for the city through the power of sport. Our focus was on Zero-Waste, renewable energy credits (RECS) and being water positive. On the latter, we worked with Bonneville Environmental, Northern Arizona Forest Fund, and Salt River Project on an innovative water restoration program.