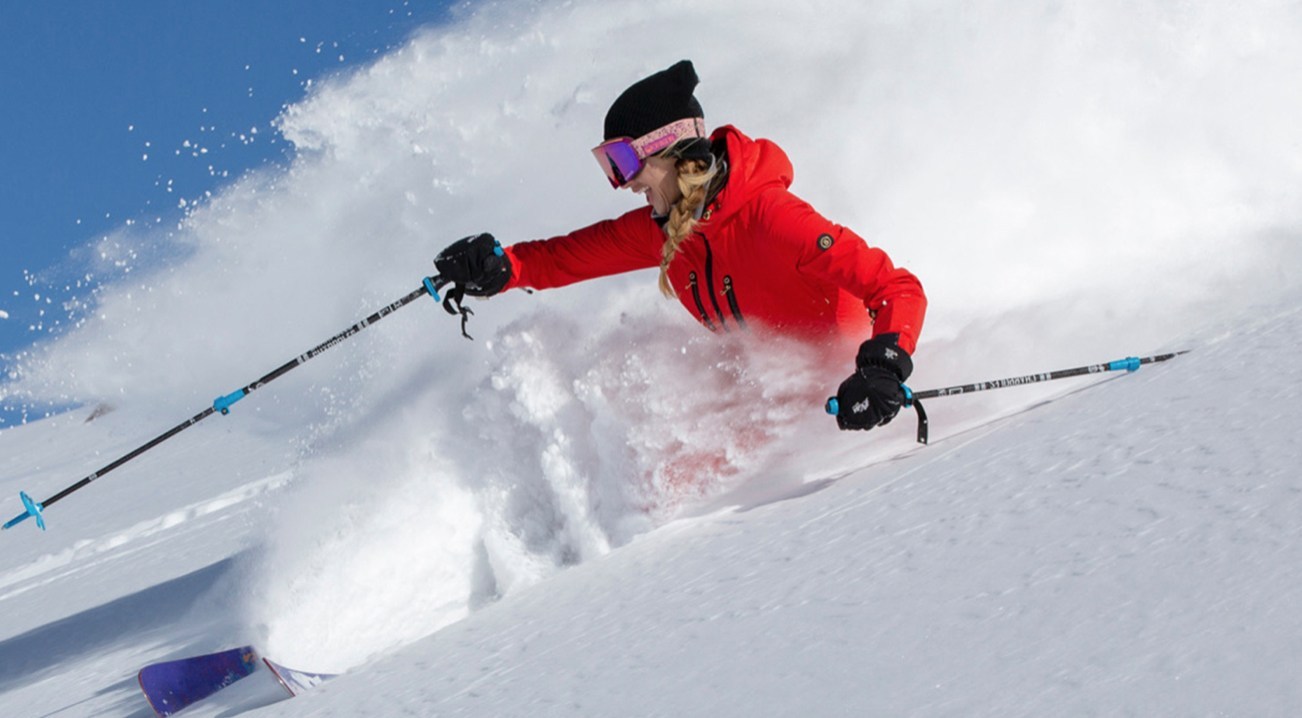 If the Green-Sports movement is going to truly make a difference on climate change in the brief amount of time available¹, there will need to be many more Sierra Quitiquits, and fast.

2. CLIMATE ADVOCATE: Quitiquit is also a Protect Our Winters (POW) athlete ambassador who speaks out on behalf of climate action in a variety of forums.

3. UNDERSTANDS THE URGENCY: She is not going to accept a “steady and quiet” approach from the sports world on climate action. I saw this firsthand during the Q&A at “Playing On Thin Ice,” a panel I moderated during Climate Week NYC in September.

GreenSportsBlog: Sierra, talk to us about your journey to becoming a freeskier, a POW athlete and a staunch advocate for meaningful action on climate yesterday.

Sierra Quitiquit: Thanks, Lew. Skiing is definitely in my blood. My grandfather was a back country skier in Alaska. My dad was a ski racer at the University of Utah. Growing up in Park City, Utah, my brothers and I naturally became skiers.

GSB: Naturally! What was your specialty?

Sierra: Speed was my thing, so I became a downhill racer at first. Injuries ultimately held me back from being a top competitive downhiller. So, I gravitated to freeskiing, skiing natural terrain, not on a course. Just the open mountain. In my late teens, early 20s, I worked at a ski shop while trying to find sponsorship for my skiing. Spyder signed me on when I was 22. Then I connected with Warren Miller’s production company…

GSB: …The producers of iconic freeskiing movies and videos.

Sierra: That’s right. From my first shoot in Iceland, the team was awesome to work with. This led to more endorsements and opportunities to build my platform by talking with media. The environment was something I wanted to talk about almost from the beginning.

GSB: Why the environment?

Sierra: I’ve pretty much always been in touch with the environment. I started an organization when I was 17 called Skiers Against Global Warming — I thought skiers should be part of the solution of climate. We didn’t get very far then but  signing on with Protect Our Winters (POW), which I did about four years ago, was a natural progression for me.

Sierra: I mean it was impossible not to notice that the ski industry was being negatively impacted by global warming. Aside from the obvious problems that go with this, one thing people don’t realize is that a low snow, climate change-shortened ski season makes it tougher to get sponsorships — which are necessary for us to compete — especially for women skiers.

It’s also impossible not to notice how the ski industry is complicit in the climate problem.

Sierra: My job as a professional skier now is to produce media. We try to make it look like winter wonderland out there. More and more, that requires faking it because there’s no snow when we show up at a site. So we have to use camera tricks.

On one hand you want to be a good ambassador for your sponsors, the resorts and the locations.

On the other, looking at the bigger picture, by pretending we’re living in a world of abundant snowfall while global warming has significantly lessened the amount of snow is a lie.

Honestly, the whole thing has made me feel really empty.

GSB: What did you do to deal with the emptiness?

Sierra: I decided to use my platform as a freeskier to advocate for climate action through POW.

GSB: How did that make you feel?

Sierra: POW gave me the rootedness, and the passion to make a difference. Advocacy made me feel on point. And it also is something that I’ve always done — I was student body president in high school and had been involved in fundraising too.

POW is really amazing — they do such a great job at educating the athlete ambassadors, deploying us to maximize our impact.

It is great, through presentations in our communities, to encourage folks to take small positive environmental actions, but our biggest impact is through advocating for policy changes.

Sierra Quitiquit’s Instagram post from the 2017 People’s Climate March in Washington, D.C., which she attended along with other POW Ambassadors.

GSB: What was it like for you to go from being a world class skier to climate activist?

Sierra: It was tough at first.

Sierra: The climate of social media lends itself to a lot of negativity. It’s easy for people to sit behind a screen or phone and attack others with whom they disagree or whose agendas offend them. I mean, I got some death threats.

GSB: Death threats? What did you do?

Sierra: I developed a thick skin. And I got more active, participating in climate marches. And I spoke out, calling elected officials and presenting to members of Congress on behalf of climate-related legislation.

GSB: You also spoke out from the audience at “Playing on Thin Ice: Climate Action Through Sports,” a panel about the effects of global warming on winter sports I moderated during Climate Week NYC in September. During the Q&A, you challenged panelist Omar Mitchell, who has played a key role in the National Hockey League’s sustainability efforts over much of the last decade. Basically, you took the league to task through Omar for not moving aggressively and boldly enough on climate. What did you think about that exchange?

Sierra: Well, Omar said that ’70 percent of league carbon emissions come from energy consumption, as we play in what are essentially giant refrigerators.’ And refrigerants are more carbon-intense than CO₂. So, the problem is massive.

He emphasized the energy efficiency advances the league is making at their arenas and the education they’re providing to community rink operators. Those are good things but just not nearly good enough. Not when we are in the midst of a climate crisis that requires major changes from big businesses with high profiles like the NHL.

It’s such a big problem but also a big opportunity. It frustrated me that the league isn’t going big on funding solutions to their biggest emissions problem, refrigerants.

So, I told Omar the NHL needed to fund innovation of low carbon refrigerants on a big scale. There’s some great work going on at the Rocky Mountain Institute — they need to be involved.

Think what that would look like? The NHL would be seen as heroes. Or they can continue to go slowly, and they can go out of business. I mean, why wouldn’t they do this?

GSB: I’m with you — I think the NHL should make a significant and public financial contribution to low-carbon refrigeration research. There is no downside to it. What do you plan to do next to move the needle on climate?

Sierra: My goal is to use my platform as an athlete and also as a model to help educate the public on this important global climate crisis…and that making big changes and big bets on climate innovation are actually good business.