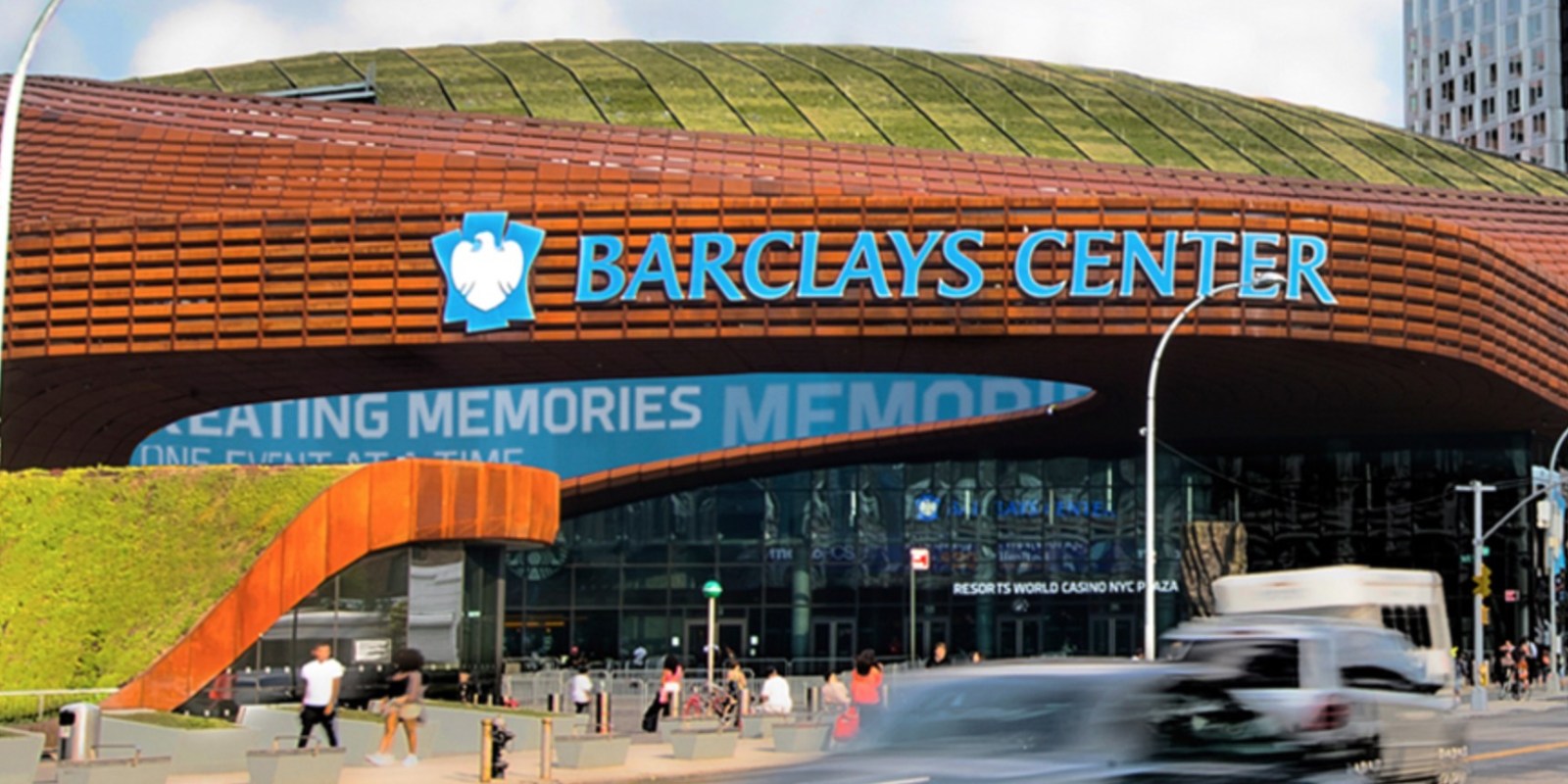 The most anticipated Brooklyn Nets season in recent memory tips off Wednesday night at Barclays Center against the Minnesota Timberwolves. Their stylish, LEED certified home will be the center of attention like never before since its 2012 opening thanks to the Nets signing All-Star free agents Kevin Durant¹ and Kyrie Irving.

Barclays Center, also the home to the NHL’s Islanders until they move to their own new arena near Belmont Park in 2023, is ready for that brighter spotlight from a sustainability perspective.

GreenSportsBlog: Rohan, thanks for hosting us during this crazy busy time, with the Islanders regular season underway and the Nets October season opener tonight. How did you get into venue operations and Green-Sports?

Rohan Bhasin: I grew up a huge sports fan just a few miles from Barclays Center in Queens. Stayed local for college, studying sports management at St. John’s. I worked as an operations intern at Citi Field, home of the Mets, for two years starting in 2009 —the year the ballpark opened.

It was a great experience. I worked about 70 hours a week during the season. I remember going through every row of the ballpark after every home stand, making sure things were as they should be. Thanks to the tutelage of Mike Dohnert, my supervisor…

GSB: …and an early Green-Sports advocate…

Rohan: …I was well-prepared for a facilities career.

GSB: Where did you go next?

Rohan: As you know, getting a foot in the door in sports is not easy so I took any work I could get. I worked in security at the USTA National Tennis Center and the US Open, managing the security budget and truck deliveries.

GSB: Not the sexiest job but it was a start at an iconic event…

Rohan: Exactly! I was thrilled to have the opportunity. I got my first full-time facilities job at the Brooklyn Academy of Music or BAM in 2014. It was intense, managing the three buildings in Downtown Brooklyn. It was a huge responsibility as I oversaw everything that went on at BAM. We had A-list acts, from John Legend to Jimmy Kimmel, and I managed the Opera House, a landmarked building.

But the truth was, I really wanted to work in sports. After getting my Masters in Sport Management through Drexel University online, I finally landed an Operations Manager job at Barclays Center in January 2016.

My role at the outset was to manage day-to-day operations.

GSB: That sounds like a big job. How did sustainability become a part of it? Was that something you requested?

Rohan: Not really. I didn’t have a background in sustainability at that time. The role was handed to me about a month into my tenure by Matt Felker, the arena’s Assistant GM at the time and the GM now. And it was a job that needed to be done. The city had reached out to us, urging us to join the U.S.’ Zero-Waste Challenge, and our management company, AEG, had a sustainability division, AEG1Earth, which measured our progress on energy usage, recycling, unused food donations and other “ecometrics.”

Things really picked up after I met Greg Lettieri of Recycle Track Systems at a zero waste panel discussion in July 2017. RTS is a leader in managing zero waste initiatives, including composting, at sports and entertainment venues.

Rohan: We had two ORCA machines on-site. We didn’t have an organics program set up then — our space is really very limited. The problem is we don’t have a place to send things like compostable plates…

GSB: …Very similar to the experience of the USTA and US Open. The nearest facility that could accept compostables was in Delaware. That worked for a while, although the carbon emissions going to and from were significant. And then the facility closed.

Rohan: We’re well aware of that situation and are looking for a long-term alternative. In the meantime, we set up a small composting test in our suites and club seating. RTS used a split compactor, with trash on one side and organics and compostable flatware on the other. We did three pilot programs this summer, and overall, they’ve helped us improve our waste diversion by over 25 percent since 2016.

Hopefully we’ll soon find a place that can take the organics and compostable cutlery from the entire arena, both back-of-house (kitchen waste) and front-of-house (fan refuse).

Levy Restaurants, the official food and beverage partner of Barclays Center, has chipped in with Family Meal, an innovative unused food program that provides meals to staff on every event day. It might not sound like a lot but the program diverted over 21 tons of Barclays Center food from landfill in 2018.

Speaking of the suites, we’re doing a major upgrade and repainting project. RTS is helping us recycle and redistribute 16,000 square feet of carpet tiles. They also help us properly dispose of e-waste and as well as LEDs. And RTS is assisting us in finding places to donate furniture among other items.

Rohan: Great question, Lew. We are in a demand response program with ConEdison in which we are paid by them to reduce our energy usage on really hot days. We participate by taking part in a load-shed in the arena. During this time, lighting and cooling are turned off or down in areas that are unoccupied in the building. That way, if many big electricity users do the same, it will offset the increases in demand by small users…

GSB: …With the result being that the utility can handle this lower level of demand rather than having to turn on an extra generator to temporarily meet a surge. Those peak generators are usually more inefficient and dirtier than their standard counterparts. Demand response is something more sports venues should engage in with their local utilities.

Rohan: No doubt about it, Lew. We used it three or four times this summer and we noticed the difference on our energy bills.

We also switched to LED lighting during the second half of last year, installing 7,000 LED bulbs on the concourses and event levels. Now we need to do the suites.

GSB: One area on which I bet Barclays Center scores well is transportation-related carbon emissions because 14 subway lines converge there as well as the Long Island Railroad. Do you have data on how many fans take mass transit?

Rohan: According to a 2013 survey, 60 percent of fans going to Nets games at Barclays Center took mass transit. Our employees scored even higher, with roughly 80 percent using mass transit or walking.

The Atlantic Terminal at Barclays Center is the confluence of 14 subway lines and the Long Island Railroad (Photo credit: Charles Eckert/Newsday)

GSB: That’s great, although the data needs to be updated. I know Barclays Center earned LEED Silver certification after it opened. Where do things stand now?

Rohan: You’re right, Lew. We achieved LEED Silver for new construction. Now we are going for Gold for Operations and Maintenance.

GSB: One relatively new green item at Barclays Center is its green roof…

The green roof reduces the amount of storm water runoff from the building, minimizes the roof’s reflected heat, and provides a more appealing visual for people visiting and living around the arena.

GSB: The look is striking!

GSB: Finally, how are you engaging the fans on green?

Rohan: In a couple of ways. We shut the exterior lights during an Islanders game on Earth Hour in 2018. And RTS created a PSA for us to air during Nets games and have activated at the arena during countless events encouraging fans to participate in recycling and composting initiatives at the arena.

In addition, we no longer use plastic straws in the venue, and most of our food and beverage service containers are compostable, provided by EcoProducts.

…And then they were turned off, as part of Earth Hour 2018 (Photo credit: Rohan Bhasin)