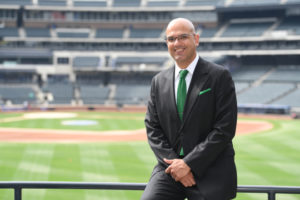 For someone who remembers attending his first big league ballgame¹ at Shea Stadium, the then two-year-old home of the New York Mets in 1966, it is hard to believe that its successor, Citi Field, will celebrate its tenth birthday in April.

Built on what was Shea’s parking lot, Citi Field was at the leading edge of green venues when it opened in 2009. Given the advances in stadium greening in the intervening decade, we decided to see how the ballpark and the Mets have kept up. To do so, we went out to Queens to meet with Mike Dohnert, the Mets longtime director of operations.

GreenSportsBlog: Mike, you’ve been at Citi Field since the doors opened almost ten years ago. That means you’re the best person to talk about the stadium’s green history and where things can go from here. How did you come to work with the Mets in what sounds like such a cool job?

Mike Dohnert: Well, Lew, I grew up as a huge Mets fan in lower Manhattan…

GSB: …As a lifelong Yankees fan, you have my sympathies…

Mike: …Let’s Go Mets! I went to the State University of New York (SUNY) Geneseo and then transferred to Baruch College in Manhattan. I studied operations management, graduating in 2001. In 1999, I got an internship with the Mets at Shea Stadium, working for the manager of ballpark operations at the time.

Mike: Oh yeah! I mean it was sports, it was the Mets, it was great. When the internship ended, my boss, Sue Lucchi, said she needed help. I said “sure.” And I’ve been there ever since.

GSB: What did you do during the internship?

Mike: Anything to do with the playing field and the club offices. Shea was owned by the City of New York; the city was responsible for the structure itself; the electrical, plumbing, etc. So we really weren’t involved in things like energy efficiency. That would change once Citi Field opened in 2009.

GSB: I know that sustainability was embedded in the DNA of Citi Field’s construction. Were you involved?

Mike: Not in the construction phase — I’m strictly an operations guy. Interestingly, the one thing we were responsible for was the maintenance of a 14 foot fire lane between Shea Stadium and Citi Field. The new stadium was built in Shea’s parking lot and the two ballparks were very, very close together.

GSB: I can imagine. What were some of the greener aspects of Citi Field when it opened?

Mike: The HVAC system was quite advanced for that time. Since then we’ve added a building management system (BMS) with sensors to collect energy usage data in real time. The front office was upgraded to LEDs over the last two years — we didn’t go with LEDs at the opening since they were so expensive back ten years ago. Since then, the price has of course come down precipitously so we’re doing rolling upgrades, starting in 2017-18 with the front office and plaza level. And this is just the beginning because we know that, by 2025, we need to be in compliance with Local Law 88…

Mike: We have an engineering firm looking how to help us get there on lighting with LEDs for the field, concourses, bathrooms and everything else. Sensors as well.

GSB: How is Citi Field doing on water efficiency?

Mike: We’ve got waterless urinals and low-flow toilets. Xlerator hand dryers are big energy savers, from a kilowatt hours (kWh) perspective, as well as from saving on paper towels and reduced maintenance. The club looked into a gray water-water retention program a couple years ago but city regulations prevented it. We are looking at sub-metering water usage which would highlight savings opportunities.