The GSB Interview: Lindita Xhaferi-Salihu on Where Things Stand with the U.N’s Sports For Climate Action Framework

The GSB Interview: Lindita Xhaferi-Salihu on Where Things Stand with the U.N’s Sports For Climate Action Framework 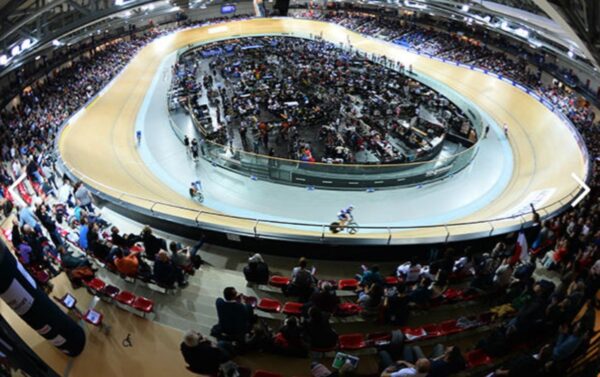 Since the U.N. launched the Sports For Climate Action Framework in December 2018, 177 teams, governing bodies, and sports media companies have committed to adhere to a set of five principles. These include reducing climate impact and educating for climate action.

It’s one thing to sign a commitment; it’s quite another to make good on those promises.

GreenSportsBlog spoke to Lindita Xhaferi-Salihu, the Sports for Climate Action lead at U.N. Climate Change (UNFCCC), about where things stand in terms of turning Sport For Climate Action promises into actions.

GreenSportsBlog: Lindita, it has been one crazy, awful, and perhaps hopeful year since last we spoke.

Lindita Xhaferi-Salihu: You might say, Lew. It has been indeed a very challenging year. We’re encouraged by progress towards a vaccine for COVID-19. The speed and urgency of this work is the result of science, expertise, research and funding coming together at a global level with unprecedented speed. While history shows that humanity is complex, conflicted and often contradictory, it also reveals our care, compassion and commitment to the common good.

GSB: So, how many teams, governing bodies and other sports organizations have signed on to the Framework?

Lindita: We are excited to have grown to 177 signatories with more in the pipeline. Sports for Climate Action is slowly becoming what we wanted it to become: a movement that will set the trajectory and provide the support for sport to play a winning role in achieving global climate change goals.

GSB: That is terrific — and your roster is chock full of A-List organizations, from Paris 2024 to the four Grand Slam tennis tournaments to the NBA to the New York Road Runners to Juventus. Where do things stand with turning its many commitments into tangible, measurable actions?

Lindita: The framework was initially designed to be broad, with the main goal being to ensure that signatories commit to align their organizations with climate science and use their microphones to promote broader climate action.

But we knew that was just a starting point, that we would need to work collectively to identify goals that will make the commitments more specific. At the same time we wanted to create an enabling platform for all sports, regardless of where they are in their environmental journey, to come together, share best practices and collectively shape the way forward.

GSB: How are you going about doing that?

Lindita: We put together four working groups of signatories, with which we seek to bring together all efforts in a unity of purpose. Each group strives to advance a different issue within the Sports-Climate space. Two co-chairs per group facilitate the process. And we — the U.N. Climate Change — ensure the deliberations and discussions are open and aligned with the goals of the Paris Agreement, that there are no overlaps, and provide our thought leadership and expertise when we can. But the participants are the real leaders in the sports-climate field so they, rightfully, are driving the process.

GSB: When will the working groups make their reports?

Lindita: We have made progress in terms of where we want to focus going forward. There is a sense of urgency for action which is felt across the board. And despite this year being very difficult for sports, we have seen an increase in commitments and very engaged participants who are keen to get going.

Within the working groups, we are working on recommendations of interim GHG emissions reduction targets for all signatories to adopt as well as a public reporting mechanism. These are expected to begin to be rolled out in the first quarter of 2021.

At the same time, we are exploring the systems of support we need to put in place so that we all have a common understanding in terms of measuring GHG emissions, identifying ways to reduce them and also issues like how we account for things like offsetting. There is a lot of work that has happened around a glossary of terms and a repository of educational and communications materials that can help signatories shape their strategies pertaining to principles of the framework.

GSB: Do sports teams and governing bodies have the staff to be able to do this?

Lindita: Not all signatories have the same starting line, despite of them all having to focus on the same finish line. However, we see a lot of potential for signatories to learn from those that are more advanced and leapfrog, but they will certainly not be left entirely alone. As mentioned, the working groups are trying to figure out an effective support system that would include guidance, one-on-one tutoring. There are also discussions to see how we can facilitate third party verification.

GSB: That’s important. How will signatories let their fans and other stakeholders know they are working on emissions reductions to help keep global temperature increase within the 1.5° C threshold?

Lindita: We certainly expect that signatories will make their commitments public and be very vocal about them. There are teams and governing bodies who are already on the vanguard on this and some have already announced their commitment.

To name one, just recently we have seen VfL Wolfsburg, a football club in the Bundesliga, Germany’s top league, announcing ambitious climate strategy committing to reducing 55 percent of their emissions by 2030 and at the same time going beyond reduction efforts and pursuing a carbon neutrality approach.  There are also other signatories who have set climate neutrality goals and have a clear plan on how to get there.

But still, there is much more that needs to be done.

We know that if we look at sports in general, there is a lot of room for improvement and unfortunately there is still a big gap between where we are right now and where we need to be. We need more action: more solutions, more engagement, and more of sports’ extraordinary energy. It is nevertheless encouraging to see that there is an appetite to accelerate work towards fulfilling their climate commitments. After all, who better than sports can set the pace for the speed of action that we need to see in the world today.

GSB: I am convinced that for sports to really make a difference on climate, the sports media needs to tell climate-themed stories. Is engaging sports media part of this working group’s remit?

Lindita: Sky Sports and BBC Sports have signed on to the Framework this summer and we have had a couple of conversations with a few sport media broadcasters who want to be part of the conversation. We hope to work more closely with media in the next year to mobilize more actors and to share a positive story about the potential of sports to accelerate global movement towards a low-carbon and climate-resilient economy.

GSB: That is of course understandable. How has COVID impacted the Working Groups’ deliberations?

Lindita: Environmental and climate issues seemingly and understandably are taking a backseat to COVID safety at sports venues, at least at first, as fans start to come back through the turnstiles. This needs to be a temporary thing and the way this happens is that we have to look at COVID and climate not as two separate challenges, but as one. The intersectionality is clear.

Unfortunately, COVID gives us an incredibly painful sense of what will happen if we don’t do enough early enough on climate. I am convinced that sports understand that we are in a climate emergency and are on board.

GSB: I hope you’re right. Amazing that something as devastating as a global pandemic that has killed 1.6 million people worldwide and, as of Monday nearly 300,000 in the U.S. could be considered a “Canary In the Coalmine” as compared to the potential devastating impacts of climate change.

GSB: …Which is a good thing. Look at what Major League Baseball did during their shortened season. It limited travel for the shorter, condensed season. A carbon-constrained world might need to see more of the same.

Lindita: Yes. So, the question needs to be how we recover safer and greener and do it in an inclusive and just manner.

The negative situation the world finds itself in right now can also be our opportunity to make this much needed transition: one that will not only help the world recover from COVID-19, but also contribute to our long-term climate goals. However, the bottom line is that we cannot leave anyone behind in this transition. It must be done in an inclusive way and so that it includes all people, especially the most vulnerable, as well as women. Which means that, if sports wants to really lead on climate, it also needs to lead on all manner of human rights, on inclusivity. Because, as I said earlier, these issues are all interconnected.

GSB: Absolutely! And with that in mind, I — and I’m sure GreenSportsBlog readers — look forward to the reports from your working groups.

Photo at top: The Vélodrome National de Saint-Quentin-en-Yvelines, site for track cycling at the 2024 Paris Olympics. The Paris 2024 Organizing Committee is a signatory to the U.N.’s Sport For Climate Action Framework (Photo credit: Paris 2024)