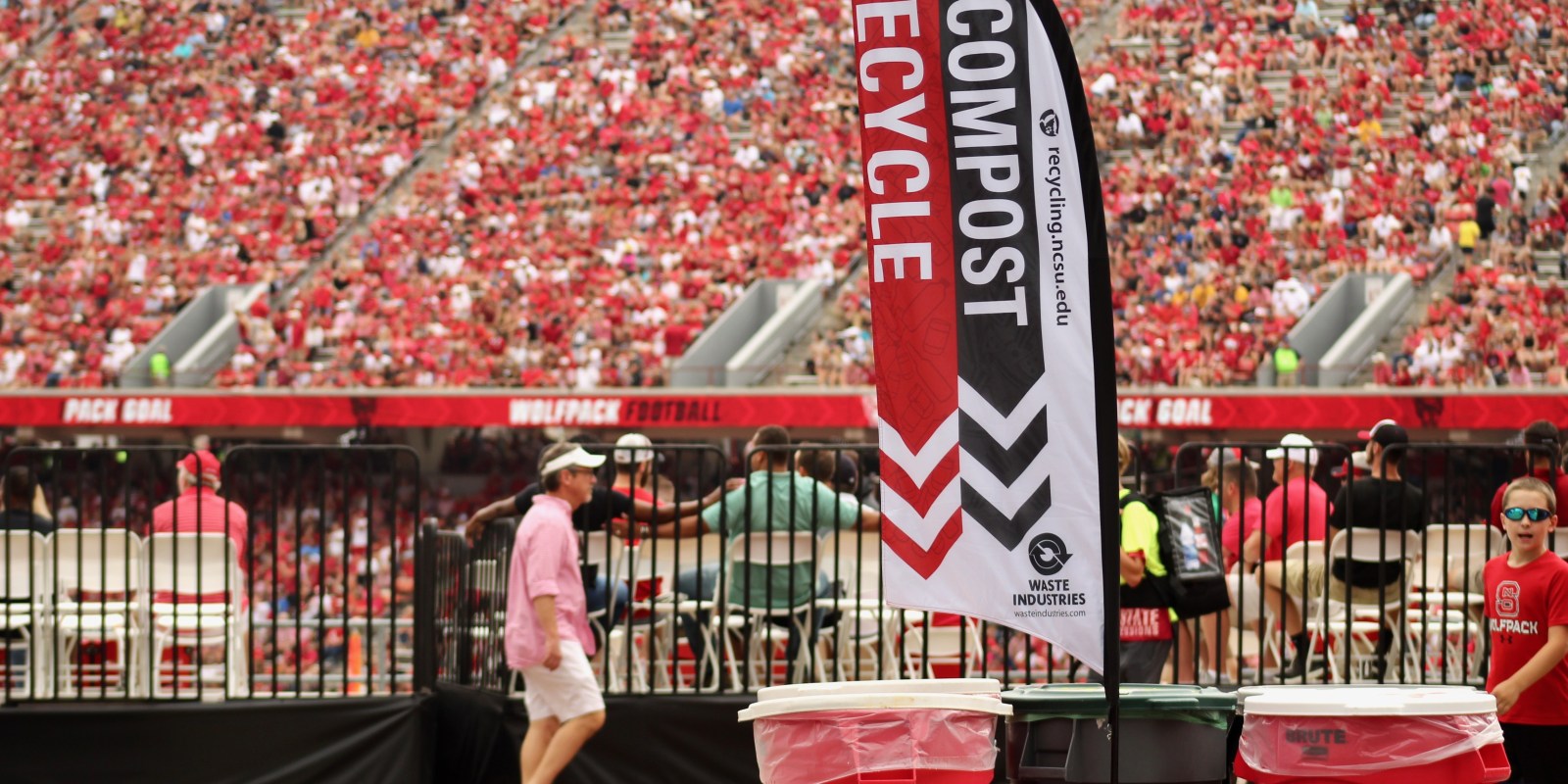 But GreenSportsBlog is interested in another ACC school, North Carolina State.

GreenSportsBlog: Lani, your journey to NC State and to helping to host the first ACC Sports Sustainability Summit is a circuitous one indeed. Highlights, please!

Lani St. Hill: Well I grew up all over the country, played Division I volleyball at Missouri State where I studied hospitality and restaurant administration. Moved to Barbados with my new husband where I coached the junior national volleyball team. Next came a move to Santa Cruz, where I worked with Hosteling International, a nonprofit whose mission is to create global citizens through travel. Sustainability, as in “how do we reduce our travel-related carbon footprint,” is part of their mission.

I was there for eight years but unfortunately the cost of living in Santa Cruz proved to be too expensive. We ended up Googling “Best Place to Raise a Family” and that’s how we got to Raleigh!

GSB: That sounds strategic and impulsive at the same time! What did you do next?

Lani: After staying home to raise our kids for three years, I took a job in 2013 with NC State’s Waste Reduction and Recycling unit. Started out in administration and that morphed in 2016 into the outreach coordinator role.

GSB: What did that entail?

GSB: That’s a big job! How did athletics fit in?

Lani: Well NC State Athletics has always been a big supporter of waste diversion — they’ve had a tailgate recycling program since 2003. So, in 2015 we implemented composting at NC State football games. One of our goals was and is to show fans that if we can compost at Carter-Finley Stadium, you can easily compost at home.

GSB: How have Wolfpack fans taken to the composting and other environmental messaging?

Lani: Engaging with fans is a vital part of our program. We talk about bringing reusables for tailgating, recycling and composting and what those actions can mean for our campus and communities. We encourage them to make a Sustainable #STATEment…

Lani: Thanks! Because of the size of our fan base, we get a lot of bang for our buck by partnering with NC State Athletics through our Zero Waste Wolfpack program.

Over 300 volunteers, students and others, make it happen, engaging with fans in the tailgate areas and elsewhere. Zero Waste Wolfpack concentrates on waste management through bringing reusables to tailgate, recycling, and composting. Future goals of the program are to publicize the school’s energy efficiency, environmental research, community building, and other sustainability efforts.

GSB: What do the Zero Waste Wolfpack volunteers talk about with fans in the tailgate areas?

Lani: They’ll answer questions as simple as “what is compost?” to “what is zero waste?” and then get more complex from there. They also encourage fans to recycle their cans, bottles, and clean cardboard. The volunteers reward fans with reusable giveaway items when they see fans acting sustainably.

GSB: Sustainable rewards for acting sustainably. That’s smart. What happens inside of the stadium in terms of environmental communications? Have you measured the impact of the green messaging?

Lani: Environmental messaging is communicated on the Jumbotron, via public address announcements, and in game program ads. In-game social media posts also go up from time to time. We haven’t measured impact yet. Anecdotally, through face-to-face fan engagements, and by analyzing stadium waste data, we know it’s working. Conducting research with fans to see if our messaging leads to change, especially to see if gameday “green” behaviors translate to the home, would be a great next step.

GSB: Hopefully funding comes through to make that research a reality. It’s really important to know how environmental messaging resonates with fans, what works and what doesn’t. What kind of Green-Sports initiatives are budgeted for?

Lani: The Zero Waste Wolfpack program at Carter-Finley has about a $20,000 annual budget thanks to a partnership with Waste Reduction & Recycling (WRR), Athletics, GFL Environmental, and Coca-Cola.

WRR and NC State Athletics also support the program’s expansion into men’s and women’s soccer, the Adidas Raleigh Relays, as well as occasional women’s basketball games and swimming and diving meets. We also table and provide presentations through the year, from Homecoming to Earth Month.

GSB: What about men’s basketball?

Lani: We currently are not part of men’s basketball games, as they are play at PNC Arena which is not on campus and not owned by the university.

Lani: Last year we came in at 44 percent for Carter-Finley Stadium. Not great when ACC rival Clemsondiverts more than 80 percent. However, we’re proud of that number because it represents a 39 percent reduction in waste-to-landfill since we started in 2015. This reduction in waste also is impressive because we don’t hand sort the waste and recycling post game, like others, including Ohio State and Texas. Our diversion numbers have improved each year, starting at 18 percent in 2015, up to 48 percent in 2018. We expect to get up to XX percent this season.

GSB: Why not hand sort?

Lani: For us it comes down to the importance of fan education. Hand sorting creates higher diversion rates, but shifts the personal responsibility of accurately sorting stuff from the fan to “behind the curtain”. We want fans to understand what is, and is not, recyclable, compostable, and waste. They can then take that knowledge home.

GSB: That is a really interesting perspective, one I’ve not heard before: Sacrificing diversion rates in the interest of changing fan behavior.

Lani: I know! Hand sorting is great for diversion rates, but it takes money and time. Despite this, we are still sending much less waste to landfill through recycling and composting. In 2015, we sent 22,166 pounds to landfill per game; by 2018, the per game landfill number had been cut almost in half with 11,603 pounds.

GSB: That is a huge win. Let’s pivot to this year’s inaugural ACC Sports Sustainability Conference. How did that come about and how did NC State come to host it?

Lani: It really started from a conversation between Lindsay Batchelor, NC State’s interim sustainability director and associate athletic director John Portland. They were talking about the Pac-12’s Sustainability Conference and John asked, ‘What’s stopping us from doing one?’ The more they talked about it, the more they realized NC State should lead the effort for the ACC. So, in January, John said, “We can find the funding; let’s do it!”

At that point Lindsay took the helm and I assisted her with developing content, logistics and campus tours. We set the event from Sunday June 2 through Tuesday June 4, kicking off with a welcome reception on Sunday, a full day session on Monday, and a morning session on Tuesday with optional tours in the afternoon of our athletic facilities, NC State Compost Facility and Research Cooperative, and AgroEcology Farm.

GSB: What were some of the highlights? Was climate change on the agenda at all?

Lani: Climate change was on the agenda — we discussed it during “Air and Climate, Energy and Buildings” within our “Sustainable Athletic Operations” block during the first morning. “Athletics as a Driver of Change” was a powerful block that included discussions on fan engagement, wellness and student-athlete community service. Dave Newport from the University of Colorado shared lessons the Pac-12 has learned in its sustainability journey.

GSB: Sounds like a substantive agenda. Wish I could’ve been there. How many people attended? Did all 15 ACC schools participate?

Lani: We were happy to have more than 60 attendees and believe we can grow that number going forward. It really was amazing! People loved it. Every ACC school except Florida State and the University of Miami attended — they both had legitimate reasons for not coming. We had broad based participation at the event, with Louisville, North Carolina, Syracuse, and Wake Forest all taking part in the presentations.

GSB: That’s great to hear. What were some of the action steps, especially where climate change is concerned?

Lani: We will be asking ourselves can we communicate about climate change to our fans? What’s the best way to do it without turning them off? Some of the other action steps include creating a competition framework that includes a variety of sustainability topics including waste, energy, water, and environmental justice programming.

GSB: Will there be an ACC Sports Sustainability in 2020?

Lani: Yes! We invited the other schools to host but we are willing and ready to do it again in 2020 if need be.