A former member of Great Britain’s Olympic field hockey team, Leigh pivoted to a career in sustainable business after stepping away from international hockey.

GreenSportsBlog spoke with Leigh about her journey and her new career path.

GreenSportsBlog: Joie, your journey is unique so far in my experience when it comes to Eco-Athletes: An elite athlete who retires and starts her career at the entry level of sustainable business. Let’s start at the beginning, with sports.

Joie Leigh: I grew up in Huddersfield, not far from Leeds and Manchester in the north of England. Tennis was my first sport and I began playing hockey at 10 years old. I played both until I was 15, eventually choosing hockey because I loved being part of a team.

I studied geography, biology and economic in my final year at school before going on to study geography at the University of Bristol. I played for the university team for a year and a club team, Clifton Robinsons, in England’s top women’s league.

GSB: What position did you play?

Joie: I was a hybrid between midfield and forward. I liked to attack! And so, at 19, I got my first call up to the senior England national team. That was a real step up. I received a contract with the team, had access to full-time training and coaching. I then spent two years shuttling between going to school and training with the team full-time.

It took a couple of years before I broke into the national team’s top 18 players — the group that actually suits up for the matches and from which the starting team is chosen.

My focus was on making Team GB’s Olympic squad for Rio in 2016. There were 31 players in the initial pool. For the Olympics, teams would have a 16 player squad that suited up with three traveling reserves in case of injury. 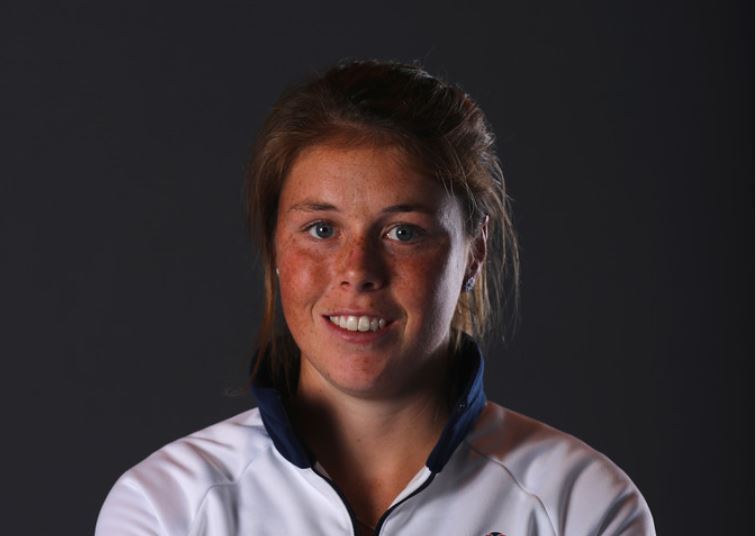 GSB: Kind of like being an alternate juror on a trial?

Joie: That’s exactly right. The traveling reserves did just about everything the top 16 did except of course playing in the matches, from training to marching into the Olympic Stadium for the Opening and Closing Ceremonies. It was an incredible experience despite not being able to play, especially as our team came away with a historic Gold Medal, beating the Netherlands on a shootout after the game finished 3-3  We existed in a bubble while we were there: Wake up, eat, practice, train, eat, play match, sleep, repeat. But when I learned that nine million people in Great Britain watched the Gold Medal match, I knew this was a very big deal.

GSB: What did you do next? Are you trying to make the Tokyo 2020 team?

Joie: Right after the Games, I went over to New Zealand for a month to play in their top league. Then I went back to training with Team GB throughout 2017. But by January 2018 I felt like I’d had enough. I was 25 and wasn’t enjoying it anymore. I felt a bit burnt out by  the structured, centralized national, Team GB program and so I went to Amsterdam to play in the Netherlands’ top league, which is the best in the world.

After being there for a year, something I’ve always wanted to do, it was time to go home, be closer to family and friends and to build a proper career.

GSB: What does a proper career look like for you? How does the environment fit in?

Joie: Well I’ve had an interest in the environment since I was a kid. I was always outside, often in nature. Also, my academic interest in geography led me to learn about the interactions between people, governments and the environment.

At the University of Bristol, I learned that humans of course rely on what nature and the planet provide but the way we live our lives and conduct our businesses don’t align with nature’s needs.

So, while my career was on the back burner whilst I was playing hockey, sustainability was always in the back of my mind.

GSB: How did sustainability and climate come to the front burner?

Joie: After the Olympics but whilst I was still training with Team GB I began to explore the sports-sustainability connection through BASIS…

Joie: That’s them! So, in September 2017, knowing that England would host the Women’s Field Hockey World Cup at London’s Olympic Park in July 2018, I asked the group putting on the event if they were doing anything around sustainability. Their answer? ‘We know it’s important, but we don’t have the resources. So, would you like to be our sustainability manager as a volunteer?’

I said yes and wrote the policy plan. It was late in the game, so we were only able to get one initiative done, working with sponsor Harrogate Spring Water to offer a recycling program in the Fan Zone. Again, we didn’t have the time to do anything big, but we showed that we could do it and the fans liked it.

Working with BASIS, I then helped carry out a sustainability review  for the Netball World Cup this past June in Liverpool…

GSB:  …For American readers, Netball is a game that’s kinda sorta like basketball that’s big in some Commonwealth countries.

Joie: That’s right. Again, we were very late, only getting started in March 2019. The main actions we took were engaging with key members of the events team, formulating a policy document, reviewing operational processes and providing some recommendations, which could also be taken forward. I’m writing up the report now and should have final results soon.

GSB: Aside from having enough time to put together a sustainability program that has some real teeth, what were your main lessons learned from your volunteering efforts at the Field Hockey and Netball World Cups?

Joie: Well, I’ve learned that there are lots of ways events and teams can show fans how to make smart environmental choices. One of the challenges is how do you make a business case for sustainability so that corporate sponsors will want to get behind the environment. Because once the sponsors get behind it, real change will happen.

I am convinced that sports is so massive that even tweaks to the fan culture will have a big impact.

GSB: I’m with you on that. The programs you’ve worked on so far as a volunteer like recycling are not controversial. How do you think sports can and should take on climate change, which unfortunately is in the realm of politics?

Joie: I do believe sports can be successful with climate-related fan programs. Look at Forest Green Rovers. A fourth division football club that is all vegan, all EV? It didn’t hurt them. In fact, they have more fans now because of their greenness!

Obviously, some teams and organizations will go more slowly than Forest Green Rovers. They can offer vegan options alongside meat offerings. They can provide more mass transit opportunities and bike valets. Fans are starting to see the impacts of climate change on their sports, from flooding on cricket pitches to air pollution that forces games to be postponed. So, they should be ready for climate messaging. And, when they get used to those messages, they should be able to accept even more of them going forward.

GSB: Finally, what are you doing career-wise beyond your sports-sustainability volunteer work? Is sustainability a part of your work?

Joie: Yes, it is! My first step on my proper career ladder, post-sport is with Carbon Credentials, an environmental consultancy in London that is devoted towards building and enabling a zero-carbon economy. My role is as an analyst, which is an entry level position. Specifically, I work on energy consumption reporting for real estate property clients, looking to see how property managers can find ways to save. I am also involved in some strategy and engagement work too, where we work with businesses to get sustainability initiatives more integrated in their business and promote behavior change.

It’s a great job and a great way to learn the sustainability business. I will continue to volunteer in the sports-sustainability space where I can and hope to make it part of my work sometime in the future.

I do believe that sports has a huge role to play in the climate fight because of its platform. I want to be part of that fight.