The GSB Interview: John Hwang, The Godfather of LED Lighting at Sports Venues

The GSB Interview: John Hwang, The Godfather of LED Lighting at Sports Venues 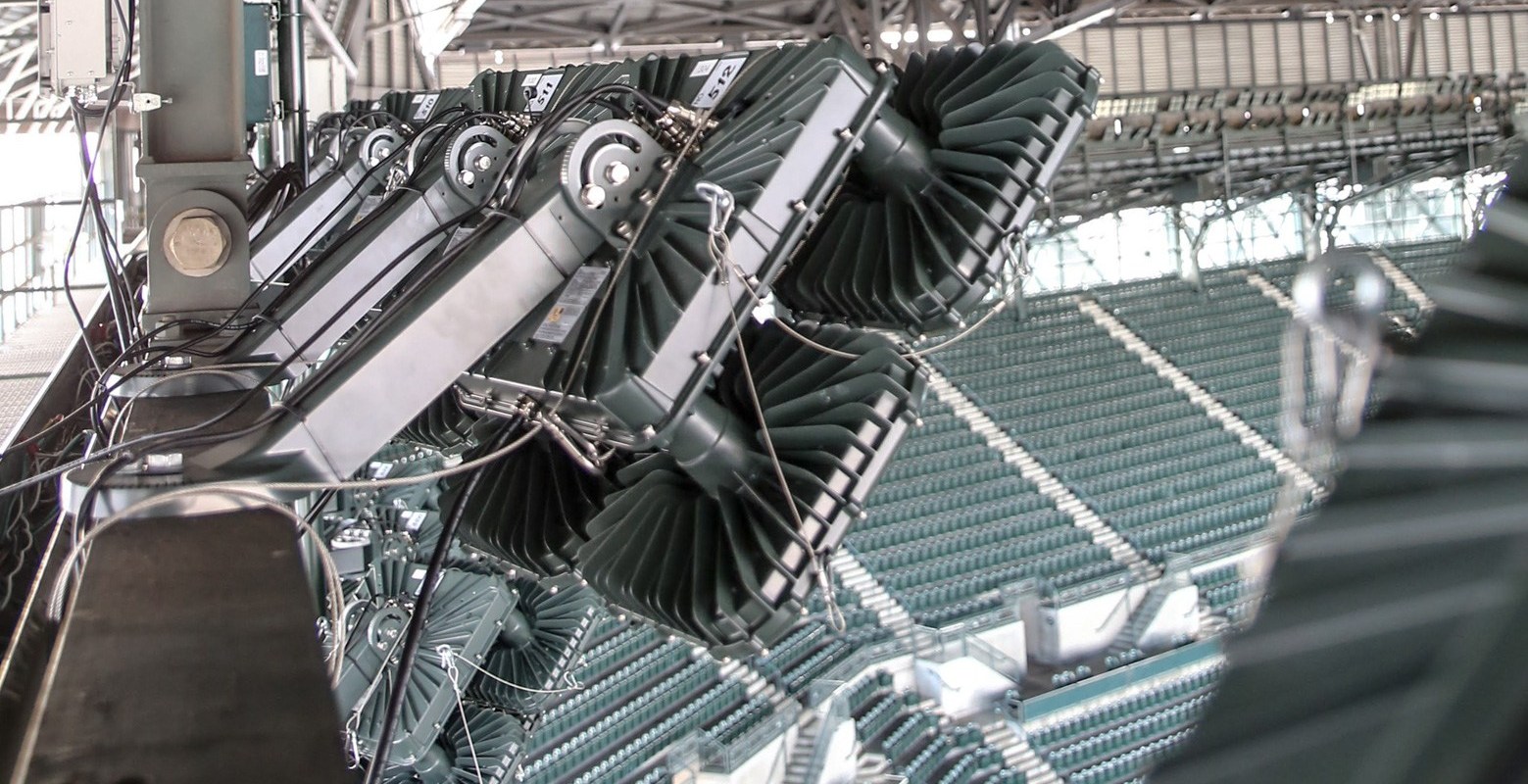 Since 2014, stadiums and arenas have been switching their lighting systems to energy efficient LEDs at a rapid clip. John Hwang and his company, PlanLED, have been at the forefront of this shift.

One might think the move to LEDs was preordained but it was not an inevitability. There were technical challenges as well as cost issues. But Hwang saw the opportunity to make a difference.

GreenSportsBlog: PlanLED is an important Green-Sports Business story. How did you come to start an LED lighting company?

John Hwang: I was born and raised in South Korea; my family moved to Seattle in 1985 when I was 15 years old.

I started at the University of Washington (UW) but felt the need to find a meaning for my life, so I dropped out of college, eventually ended up going back to school in Kansas City, majoring in biblical studies and, became a youth pastor. It was a big commitment but also worthwhile, helping immigrant families and runaway kids from broken homes that mainstream churches didn’t do enough to help. I had 20 to 30 kids visiting me every evening, counseling them trying to help them get on track with their lives.

It was worthwhile but also a huge struggle. I was a bit naive to think that I could easily change the world. Feeling the need to recharge, I moved back to Seattle and started a family. Eventually I owned my own financing company in Seattle focused mainly on commercial and residential real estate in the Pacific Northwest.

My company did well until the sub-prime mortgage crisis hit in 2007, followed by the 2008-2009 global financial crash. It was a very tough time. I lost most of my partnerships with banks and real estate became a battlefield that, after awhile, I just didn’t have the stomach to fight in anymore. It was time for another change.

GSB: So what did you do?

John: I realized that it was time for me to start something that is based on a vision for the future. In 2008, an investor friend asked me to evaluate the value of acquiring a Korea-based LED lighting company.

Korea, which in many respects, led the way on mobile phones and TVs, was also ahead of the curve on LEDs. There were about 1,000 LED companies in Korea at the time.

LEDs, in their infancy here, offered a much higher quality of light. So my evaluation was that #1, there was a huge deficit in terms of understanding the possibilities of the advanced lighting industry here, #2, the market for LEDs was ready to grow rapidly — in fact, the value as I analyzed it, of going into lighting was much greater than staying in real estate! And #3 there were limited financing options for lighting retrofit projects, which meant opportunity for me as I could provide the financing know-how.

John: Indeed! Especially since there were a number of energy efficiency rebates and tax breaks both at federal and state level. It was the most attractive, powerful business opportunity I had yet seen!

So we launched PlanLED in 2009 to finance lighting projects for renovation and retrofits. Our goal to was to help Americans save energy and money, generate new jobs and improve their quality of life.

GSB: Go LED, go green and go big all at one time. How did you get started? Did your investor friend stake you to some early seed money?

John: I had lost a lot of money during the breakdown of Wall Street. In order to keep the business going, I consulted with Korean LED makers to help test products in the USA. At the same time I educated myself on LEDs, importing knowledge from overseas, and eventually became an expert. I met with manufacturers, utility providers and researchers. I began to write articles about LED lighting benefits, including the potential to improve human health and performance. In fact our first project was developing human-centric lighting for a small office space.

GSB: What do you mean by “Human Centric?”

John: Human-centric lighting answers the question “What can new lighting technology offer to enhance human experience while reducing energy usage?” The possibilities that we discovered with LEDs were astounding — we could reclaim the lost benefits of natural light, which would lead to improved job performance, better sleep patterns and more.

We took the LED story to Boeing for their plant in Everett, Washington, the largest building in the United States — it is so big, you could fit Disneyland inside of it!

GSB: Did Boeing go for it?

John: It took a long time — the technology had to mature and multiple pilot projects had to be completed with satisfactory results. Working with innovative lighting partners like GigaTera and Samjin, we were awarded the contract to shift the Everett plant to LEDs in 2017, after eight years of experimenting the possibilities with Boeing engineers.

GSB: Talk about a long sales cycle…Congratulations! How and when did you get into the sports space?

John: Thank you! Sports goes back 2010 when I got introduced to the Vulcan Group, Paul Allen’s company that, among other things, owned the Portland Trail Blazers and Seattle Seahawks. It was at Vulcan where I met Jason Twill who would soon become one of the founding directors of the Green Sports Alliance. We eventually implemented human-centric, LED lighting at the Vulcan headquarters in 2012, completing the entire building in 2014.

Through Jason, I met Scott Jenkins, who then ran operations for the Seattle Mariners at T-Mobile Park, formerly known as Safeco Field, and is the Board Chair of the Alliance. We installed human centric LEDs in the clubhouse in 2013 and then the stadium lights in 2015, making Safeco the first MLB Stadium with LED game lights.

In order to make Safeco Field the first LED stadium in MLB, we had to commit to a review process where we would retrofit just the half of the stadium with LED and let all the stakeholders join us for an evening of lighting quality comparison between old and new. If there was even one objection, it was our commitment to reinstall the old lights at our cost. Obviously, no one wanted to go back to an obsolete technology with more glare, less color and annoying flickers.

That gave us the exposure we needed to enter into the sports venue space. Eventually we brought LEDs to Yankee Stadium…

GSB: One of the early signatories to the UN’s Sports for Climate Action Framework…

John: Yes! We then relighted the Moda Center, home of the Trail Blazers, Pepsi Center in Denver, home to the NBA’s Nuggets and NHL’s Avalanche, the SAP Center in San Jose, home ice for the Sharks and, this year, we installed LEDs at Busch Stadium, home of the St. Louis Cardinals.

GSB: What an impressive lineup! Who are your main competitors and why should prospective customers, including sports venues, choose PlanLED?

John: There are two other major sports lighting manufacturers that mainly focus on energy savings and return on investment (ROI). They also have great technology and solutions but we differentiate ourselves by offering a design that focuses on improvement of human experience.

Sports venues were slow to adopt LEDs because of the fear of unknown; broadcasters also had high expectations that we had to meet and even exceed. It took a lot of hard work and multiple pilot processes but now we have proven the new concept and we are ready to make a change in all sports applications.

John: Great question. We offer improved light uniformity and our lights remove the glare. The current LEDs are great for broadcast with improved color and flicker free environment. As an example, Yankee Stadium became the first baseball venue to have game lights for the infield and the outfield, creating an ideal playing environment for football and soccer as well as baseball. Also we bring human centric lighting to clubhouses and training areas, bringing daylight benefits indoors.

GSB: What is the average return on investment (ROI) for venues that switch to PlanLED lights?

John: For arenas on energy only, right now it’s a three to five year payback. For football stadiums, which have far fewer event dates, the payback can be between ten to even twenty years or more. Baseball is somewhere in between. However the improved human experience for both athletes and fans, along with dramatic improvement in broadcast quality makes these soft benefits even greater motivation for investing in a new lighting technology.

GSB: How have players reacted?

John: They love it. Recently inducted Hall of Famer Mariano Rivera, the greatest relief pitcher of all time, often remarks that he could have extended his career another five years with LEDs. Rivera’s Hall of Fame classmate Edgar Martinez of the Mariners commented how the batters can see the ball batter with clearer view of the 108 red stitches. Tim Connelly, President of Basketball operations for the Denver Nuggets also shared with us that his players say that they shoot better with our lights.

Ex-Nuggets player Bill Hanzlik and Ozzie Smith, another baseball Hall of Famer with the Cardinals, have joined Planled’s SHINE program to help spread our mission to bring better lighting to our schools.

SHINE is a partnership with athletes, teams and the GSA that offers lighting education programs for all age groups while generating the funding to give away LED lighting systems to underserved communities. It will work with research institutions to see if the metrics bear out our belief that lighting quality will result in better grades, fewer headaches and overall improvements for student learning.

Our ultimate goal is to accelerate the deployment of LEDs, from stadiums to schools, from hospitals to residential. Basically we’re looking to pair a disruptive technology with a disruptive business model.

Motivating the sustainability movement with love that improves life quality for our children, parents and coworkers. Then, spreading the message through the powerful platform of professional sports. This is why we do SHINE.

So far we have launched SHINE in New York City, Denver, Seattle and St. Louis, with expansion plans for San Jose, Fort Worth and Hawaii.