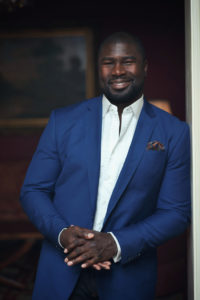 Ovie Mughelli (moo-HAY-lee) is one of the most fascinating characters I’ve come across in the five plus years since I started GreenSportsBlog. College and pro football star. Announcer. Gets interested in the climate change fight. Comes up with “Gridiron Green,” an African American, environmental comic superhero.

We were fortunate to be able to sit down with Mughelli to hear his incredible story and his plans for Gridiron Green.

GreenSportsBlog: Ovie, we’ve been wanting to talk with you for a long time so thank you for the opportunity. Before getting to your evolution as a climate change fighter and to Gridiron Green, tell us your back story.

Ovie Mughelli: Thanks for the opportunity, Lew. And I’ll tell you, I’ve been blessed from the beginning. My parents both were born in Nigeria who moved here at 18, 19, looking for a better life. They gave me, my two sisters and my brother a very strong work ethic combined with a duty to others. The idea of, if you can make someone’s life better, you do it. And this was our ethos from the beginning, giving even as we received help. It was a humble beginning, all of us in a one bedroom apartment, sleeping on the floor. Grew up in New York City until third grade, then moved to Charleston, South Carolina through my high school years. My dad, Olumide, became a successful OB-Gyn, is a Big Brother and involved with the Charleston Boys Club. My mom, Agnes? She got her MBA and runs his office.

GSB: This is an American Dream story if I ever heard one. Did you dream of an NFL career in high school?

Ovie: Not really. I did well enough in high school, both in the classroom and on the football field to get a scholarship to Wake Forest as a fullback. Went there as a pre-med student, you know, to follow dad. Was interested in sports medicine, took organic chem, bio mechanics…

GSB: …Sounds like the med school track to me…

GSB: Doesn’t sound like the NFL was where you were headed…

Ovie: I didn’t think so early in my college career, just didn’t see it as a real possibility that I could play in the NFL. Med school beckoned but my parents and coaches believed I could do it. And, lo and behold, the Baltimore Ravens selected me in the fourth round of the 2003 NFL Draft.

GSB: Fourth round out of a seven round draft is impressive, especially as a fullback — a position that was beginning a deemphasis that continues to this day.

Ovie: Thanks, Lew! I couldn’t believe it. And, even though I was drafted I just tried to survive that first training camp. Didn’t think I’d make it.

GSB: Man, you need to have more confidence in yourself! Or maybe that self-doubt is what propelled you to success?

Ovie: That and special teams¹. Back then teams still had two fullbacks on the 53-man roster. No team kept three. Except for the Ravens that year because I showed them what I could do on “specials.” That’s how I made the team. Once I established myself in Baltimore, I started thinking about how I could give back. Started the Ovie Mughelli Foundation in my third year there — it wasn’t environmentally focused; rather it was really a classic, “give back” with education and life skills being the main thing.

GSB: And you became a Pro Bowler (aka All-Star) as a special team ace…

Ovie: Again, something I wouldn’t have predicted. That allowed me to sign a six-year free agent contract with the Atlanta Falcons in 2007 which made me the highest paid fullback in the league. So my “give back” instinct kicked into a higher gear as far as the foundation was concerned.

GSB: So how and when did environment and climate change become your thing?

Ovie: This is a crazy story, Lew. First, let’s go back to my childhood in Charleston. I remember watching Captain Planet environmentally-themed cartoons back in the 1980s…

Ovie: Yes. I thought at the time that it was so cool there was a character, Kwame, who was from Africa. You didn’t see anything like that on TV. So, now, flash forward to 2007. I’ve signed with the Falcons. went to this random event in Atlanta where I met Ted Turner and his daughter, Laura Turner Seydel. They eventually became second family to me. At that time, Laura started asking me, ‘What does your foundation do? What are you doing on the environment?’ I said, ‘Nothing. It’s not so important as access to education, life skills.’ Laura’s response? ‘The environment is connected to everything. If you love kids, you have to get involved with the environment!’ That really opened my eyes. I had thought the environment was for tree-huggers, for rich folks who didn’t have to worry about their basic needs so they had the time and means to care about the environment. But then I started to delve into it, and the more I did, the more I got it.

GSB: What did you start to understand?

Ovie: I learned that climate change is not just about polar bears. It’s also about Hurricane Katrina, wildfires in the West, food deserts, the Syrian crisis and much, much more. Thanks to the Captain Planet Foundation and the Turner Seydels, I got to attend numerous climate change-related seminars and conferences. It became crystal clear: You couldn’t argue the science.

I also learned that people of color are the most affected and the least able to adapt to climate change. Underserved and unengaged communities are impacted by climate issues for a longer duration. It effects health, economy and education due to the residual implications. And yet robust conversation with these communities are not heavily pursued to make these folks change agents.

So the question became how to combat climate change? Laura Turner Seydel urged me to get involved, to use the platform of sports to engage fans who, she said, ‘Love clean air, clean water and God’s Green Earth. You have to give people the mindset to make green normal.’ And Laura again pressed me about kids, saying, ‘Ovie, you can’t say you love kids if you don’t advocate for the environment!”

That hits home because my wife and I have three kids — our first two are girls and then a boy. Our daughter Nesia and our son Obasi were both born prematurely. We weren’t able to hold Obasi until he was 16 days old and could take either of them out of the NICU² for a long time because of the poor air quality in Atlanta — thankfully, they’re fine now. This brought environmental problems home more than anything and was unacceptable! So I felt I had to do something.

GSB: So what did you do with your interest in climate, and with Laura’s nudges?

Ovie: Through the Ovie Mughelli Foundation, I started to run football camps with an environmental theme. We had “Recycle On the Run” drills, had them answer environmental questions, take positive environmental actions and more. I also started to give climate change-themed speeches as part of a Green Speaker Series.

GSB: What were you talking about?

Ovie: Basically I said we have to go beyond complaining about the environment, about climate change. We had to shift from complain to action! I also emphasized that shifting to a greener, cleaner economy would be a winner job-wise and otherwise.

GSB: Did you talk about environment and the climate in the locker room with your Falcons teammates? If so, how did they react?

Ovie: I sure did. And look, teammates in an NFL locker room, we’re like brothers, supporting each other out on the field. So I felt comfortable talking about my climate activism with them. Now, it did raise some eyebrows among the guys like Matt Ryan, Tony Gonzalez, and Roddy White. They basically asked, ‘is climate change real?’ I told ’em, ‘Yeah, it’s not only real, it’s human caused and we need to deal with it, sooner rather than later.’ And they came around on it. Other guys fought fiercely with me, saying ‘it’s a hoax,’ or ‘climate change is just a way for the government to take more of my money.’ I don’t know that I changed those minds.

GSB: Sounds like, from talking to eco-athletes who are active today, that the locker rooms sound similar as they did a decade or so ago. That needs to improve, fast. So I get the environmental football camps and the speaking engagements. But how did your environmental super hero cartoon idea — Gridiron Green — come to pass?

Ovie: Well, it goes back to Captain Planet! I always wanted to recreate an environmentally-themed comic book, but with a black super-hero — Kwame times 1,000! — for planet earth. Environmental justice, the right to clean air and water, the right to live healthy, were the themes. I sketched out a rough version in 2009, showed to some corporations and the NFL for sponsorship back then; they showed some initial interest but not enough to fund it. Still, I kept going and in 2012 I had a friend-of-a-friend who is an artist, do an even better sketch.

GSB: Then what happened?

Ovie: It kinda went on the back burner for several years — I didn’t really know how to market a comic book. Then, in 2016, I went to a youth summit led by John R. Seydel — Laura’s son. One of the sessions, “Comics Uniting Nations,” not surprisingly caught my eye.

GSB: I can see why! What was it about?

Ovie: The UN had recently published 17 sustainable development goals (SDGs). They were wordy, wonky and a bit confusing. So folks at Comics Uniting Nations and UNICEF thought ‘how about a comic book or books to make the SDGs clear and even fun.’ I thought, ‘Wait a second — I got this!!!” They liked it and gave some initial seed funding to help get Gridiron Green to get to the next level. That allowed me to hire a top flight artist, Matt Bahr, to work with me to tighten up the look, feel and story.

GSB: How has that gone so far?

Ovie: It’s been a two-year journey for Matt and me, sharing our drawings with folks at the NFL, as well as at environmental and social justice nonprofits. We want to use Gridiron Green to reach people who have not engaged on environment and climate yet, who don’t know what a carbon footprint is. Gridiron Greencan be an important gateway to get people involved on climate, including conservatives, especially conservative sports fans! And we’re looking at more than a comic book, from curriculum to video games to toys to even feature animated films. We’ve asked for buy-in and financial support, moving the ball forward a bit but not enough to publish yet.

GSB: It sounds like you’re moving towards the goal line; what has to happen next so you guys can finally make Gridiron Green a reality.

Ovie: Right now, we’re working on tightening up the business plan — we’re looking for funding in the neighborhood of $100,000, which includes curriculum.

GSB: This seems like a doable number to me; please keep us informed as to how fundraising goes!