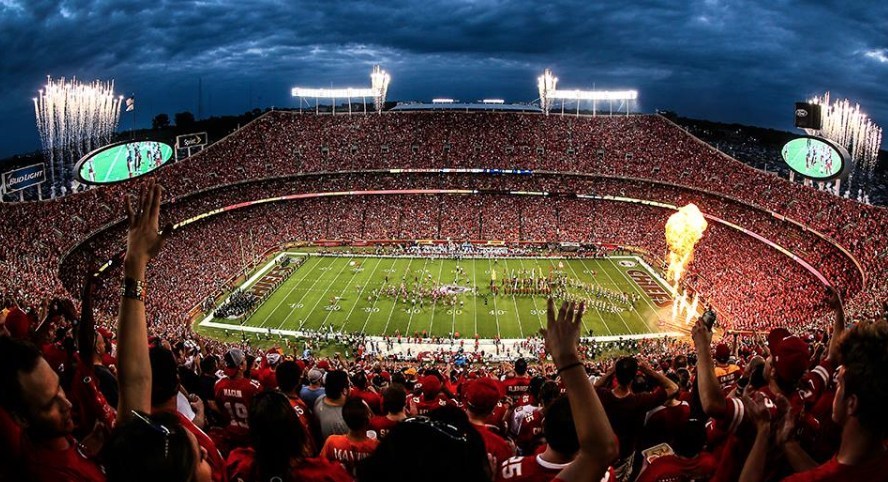 The Kansas City Chiefs are one of the most exciting teams in the NFL. They lead the AFC West, thanks in large part to the often spectacular play of quarterback Patrick Mahomes II, the 2018 league MVP.

The greening initiatives at Arrowhead Stadium, the Chiefs’ 47 year-old home, while not as dazzling as a Mahomes look-away pass, have been substantive and innovative.

GreenSportsBlog spoke with Brandon Hamilton, the Chiefs’ VP of Operations, about the history of Arrowhead’s sustainability programs and where things might go from here.

GreenSportsBlog: My second favorite team is the Kansas City Chiefs¹ so it’s a pleasure to talk with you. How did you get into the operations department at Arrowhead?

Brandon Hamilton: I worked in construction for many years, including for three and a half years on the Arrowhead Stadium renovation from 2007-2010. We gutted the building to the skeleton and then built it back up.

My role was as the liaison between the contractors and the Chiefs, managing the budget for all of the mechanical, electrical and plumbing. I had studied stadium systems over the years and was well versed in their operations. When the opportunity to join the Chiefs facilities and operations team presented itself, it felt like it was a natural next step for me.

GSB: When did the Chiefs get involved with the sports greening movement and what was the catalyst?

Brandon: Our efforts really started in 2011. But our team president, Mark Donovan, joined the Chiefs in 2009 from the Philadelphia Eagles as the club’s chief operating officer. He of course was very familiar with the Eagles’ Go Green program, and that’s how the discussions really began to ramp up…

GSB: …The Eagles, thanks to minority owner Christina Weiss-Lurie, were one of the true Green-Sports pioneers, launching Go Green in 2004.

Brandon: That’s right. And 2011 was also the year the Green Sports Alliance launched, so the stars were aligned for the Chiefs to get involved. In fact, we became a charter member in 2011.

GSB: How did you feel about the green initiatives back then?

Brandon: I’ve always had a love and appreciation for the outdoors, so I was on board from the beginning. I studied geology and geography at Northwest Missouri State so, I guess you could say I had the right mindset for Green-Sports.

GSB: What were some of the first greening programs you and the Chiefs undertook?

Brandon: We actually went with composting at the beginning…

GSB: That’s unusual. Most venues I’m aware of take on a whole host of greening measures before getting to composting. Why did you go that route?

Brandon: We were already measuring our food waste in the kitchens. And we had a top quality commercial composting facility nearby. Everything lined up and so we started back-of-house and front-of house composting at Arrowhead in 2011, then added The University of Kansas Health System Training Complex which is next door.

GSB: How did composting go over with the fans?

Brandon: It’s been very positive. Early on we won a grant from the Missouri Department of Natural Resources for recycling and composting receptacles throughout the concourses and the suites. The fans are used to them by now.

Our concessionaire partners, Aramark for the concourses and Levy for the suites, are all in. About 95 percent of what Aramark uses and 100 percent of Levy’s materials are either recyclable or compostable.

Our staff does a great job post-game. They go through every aisle in the 73,000 seat stadium, picking up recyclables and compostables. Our diversion rate, which varies from 40 to 50 percent, might not sound that great, but the reason it hovers in that range is that we include the tailgate areas which are very hard to control, especially when you consider the parking lots cover a 135 acre area.

Another thing that depresses our numbers is that China is not taking nearly as much of our recycled material as before. It’s made recycling more of a challenge and we’ve had to find new partners to recycle with.

GSB: That has to be hurting every venue, not just Arrowhead. You guys certainly have been early composting adapters. The Chiefs also have been innovators, pioneering compostable chip bags. How did that come about?

Brandon: It started in 2013. BASF gave a presentation at the Green Sports Alliance Summit in Brooklyn about a compostable peanut bag. I thought to myself, ‘we need to get these bags at Arrowhead.’ Jami Leveen of Aramark, our concessionaire, connected us with BASF and the conversation began between them and our composter, Hampton Farms.

It turned out to be a long product development process — the supply chain for compostable bags is convoluted to say the least, from resin to film to printing to packaging. A key challenge was for BASF to be able to develop a product that had a six-week shelf life to meet the standard of the industry.

We finally were able to launch the product in 2017 — the transition was seamless — and have been very satisfied with it.

GSB: I imagine the compostable bags cost more than their traditional counterparts. How much of a price increase was passed on to the fans? Is Arrowhead looking at other products for this same type of packaging?

Brandon: There is a cost increase of five percent, which Aramark chose to absorb. We expect that the cost difference will drop as we gain scale by adding more compostable products to our roster.

Aramark gave BASF a list of all the vendors from which they buy products for Arrowhead and asked how many could be converted to compostable packaging. Wings and hot dogs are under consideration, but it could be that coffee filters could be next. A compostable coffee filter/packaging already exists, but it needs to be introduced into our market.

GSB: I look forward to hearing what’s next on the compostable packaging front at Arrowhead. Turning to renewables, have the Chiefs looked into on-site solar?

Brandon: We’ve been looking at solar for years — we love the Eagles’ installation at Lincoln Financial Field, what the Redskins have done at FedEx Field outside of Washington D.C., and others. The Chiefs have installed some solar panels at both Arrowhead Stadium and The University of Kansas Training Complex.

Because our price of grid electricity is so low, it’s hard for solar to compete right now and thus difficult for us to expand our solar footprint. But this could be changing; we will continue to monitor the situation. Our utility company, Evergy is building wind farms in Kansas — we are looking into the potential of purchasing some of our energy that way.

One thing we have done is become much more efficient with the electricity we do use. All of our heating and cooling equipment is Energy Star certified.

And we’ve got an automated ‘load shed’ program through Automated Logic, our building management system (BMS) provider. December is when we use the most electricity at Arrowhead — everything in our building is powered by electric, including the heat. So, on very cold days when electricity usage hits a certain level, the Automated Logic system lowers the thermostats by 1° F. We save energy and money and reduce our carbon emissions.

GSB: Kudos to you and Automated Logic. Now, imagine it is 2024 and we’re talking again. Don’t worry; the Chiefs won a Super Bowl during that time. What would you like to say happened between 2019 and 2024 at Arrowhead from a greening perspective?

Brandon: The Chiefs will have continued to increase their waste diversion rates by improving their process inside and outside the stadium along with increasing partnerships with new recycling and sustainability minded businesses.