The 2021 Waste Management Phoenix Open was significantly quieter because of the coronavirus pandemic limiting the on-site presence, but the tournament’s green message meant it was another week to shout about at TPC Scottsdale. 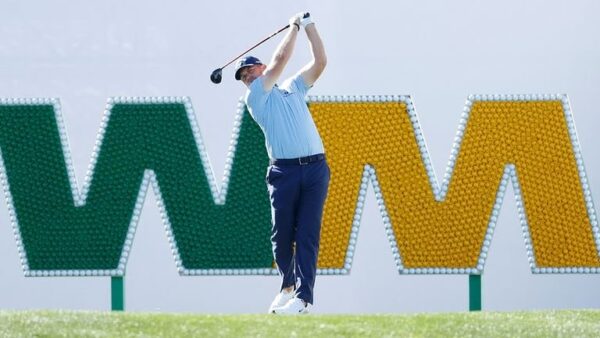 It’s 20 degrees Celsius on a beautiful Sunday in late winter, and a spectacular aerial shot shows off the course and complex in its entirety, a streak of sunlight flaring off the lens.

“There’s 15-thousand people normally in the wrap-around stadia around the par-three 16th hole,” says Sky Sports presenter and commentator Rob Lee. That can only be TPC Scottsdale in Arizona and it can only be the WM Phoenix Open.

Golf fans know it well as the best-attended event in the sport and home to the loudest hole. Those are easy things to highlight, but it’s also “The Greenest Show On Grass”, so why doesn’t that part get quite so much press? 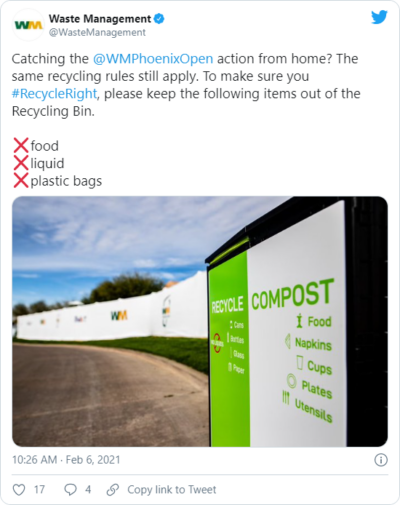 Maybe because the first two feel intrinsically so much more understandable, relatable… numbers of spectators, the decibel level. When the venue took in 216,818 fans on the Saturday in 2018, it set a single attendance day record greater than any football crowd ever (for the official record, 199,854 people were inside the Maracana Stadium when Uruguay beat Brazil 2-1 in the 1950 World Cup Final).

It is a truly unique experience that greets any golfer standing on the 16th tee at Scottsdale – if they haven’t faced it before, they don’t know what they’re in for. It can be brutally binary – cheers or boos. Covid permitting, that is, with the 2021 contest seeing crowds decimated and noise vastly reduced. That leaves ultimate selling point number three – what’s in a tournament name?

Glance down the calendars on both PGA and European Tours and you’ll find a whole host of different sectors represented within the title sponsors. Banks, insurance firms, airlines, car manufacturers, hotel groups and… Waste Management. Not the most attractive name, admittedly, but it does what it says on the bin – and more. 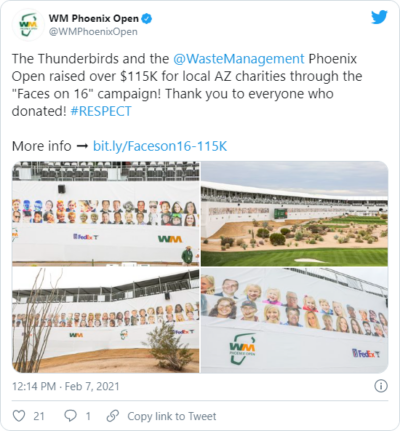 In their 2020 Sustainability Report, the WM Phoenix Open calculated that they emitted 1,128 metric tons of carbon dioxide equivalent, all of which was offset. 100% of tournament materials were diverted from landfill, 100% renewable electricity was purchased, 50 million gallons of water were restored to the Verde River Valley. Even that cheeky WM water feature logo seen on the aerial shot was super-sustainable in itself, because the 144,000 golf balls used to compose it have been reused every year since 2012.

“We analyse the greenhouse gas impact of disposal to make sure we are making the best choices for all materials that are generated, and this work is validated as part of our zero waste certification.” 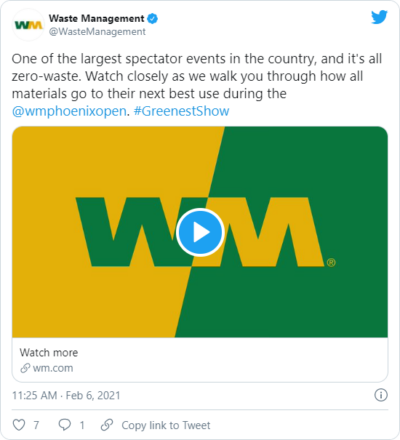 So basically, they are taking responsibility for their environmental expenditure, while there’s an education piece here too. With typically more than 700,000 fans in over a week, that is some footfall to work with if you want to make a message land. How do you do that? Have a laugh with it.

Take the #BinThereDoneThat contest, challenging attendees to be creative with their recycling efforts and document it for all of social media to see. It’s a clever way of hooking in Generation Z, who are generally more engaged with this issue.

“The WM Phoenix Open attracts a wide-ranging audience and is considered a bucket-list sporting event,” Spivak adds. “It appeals to younger fans because it is unique, fun, and is committed to making a positive difference for our planet. This meaningful and far-reaching mission resonates with younger fans as the tournament demonstrates and proves that when we work together, we can actually inspire change.” 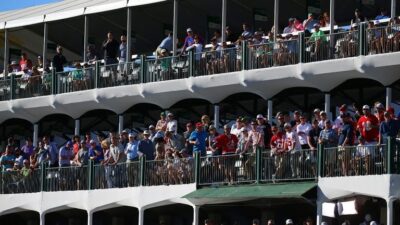 The Phoenix Open traditionally attracts the biggest crowds in golf

That involves deep social impact too, from the Sustainability Forum thought-leadership event and the partnerships with companies who turn recycled plastic bottles into shirts, shoes and swimwear, to the projects and programmes that benefit local communities in Arizona.

Under-18s enjoy free access all week with an adult, differently-abled and disabled people can get involved in tournament activities, while the Special Olympics are supported and military personnel are honoured as “Hometown Heroes”. For Spivak, it’s not just wholly holistic, but brilliantly effective.

“Inspiring behavioural change creates a ripple effect that surpasses any achievements on course,” he adds. “The scale is tremendous, going beyond the golf course.”

It shouldn’t be a surprise, given the way this event has been run for more than 80 years – by a prominent civic organisation, the Thunderbirds, whose raison d’être is an interest in sport and a dedication to community affairs. Their current “Big Chief” is Chance Cozby, and while those bumper attendance figures might boost the bottom line and look impressive to some, it’s not something he’s ever wanted to make a big fuss about. 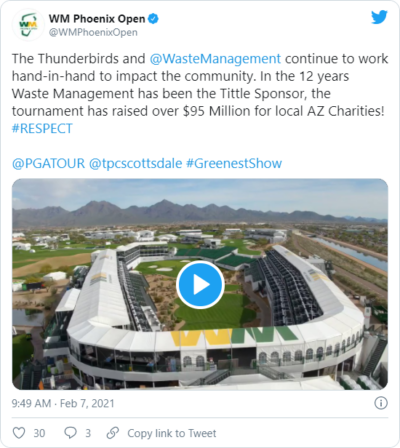 “The only number we really care about is charity,” said Cozby, as tournament chairman in 2019. A year later, the WM Phoenix Open raised $14m for more than 200 different organisations.

While the WM Phoenix Open has led the way in terms of sustainability (quite literally; they’re the only golf tournament to have signed up for the UN’s Sports for Climate Action Framework), others are starting to follow, the irony being the next best exponent is also an event staged in the desert. For the Omega Dubai Desert Classic, their achievements include reducing irrigation consumption by a third, switching their water supply to a 100% recycled source, and creating protected areas to preserve and encourage birdlife.

But to effect meaningful change, you need figureheads to inspire and keep this issue in the hearts and minds of golf fans, so who better than Suzann Pettersen, who holed the winning putt for Team Europe at the 2019 Solheim Cup? Last autumn, the Norwegian became a Sustainable Golf Champion for the non-profit GEO Foundation – and it’s fitting that her world view should be informed by the very reason she was seen as a controversial pick to face the USA at Gleneagles (the fact that she spent nearly two years away from golf on maternity leave). 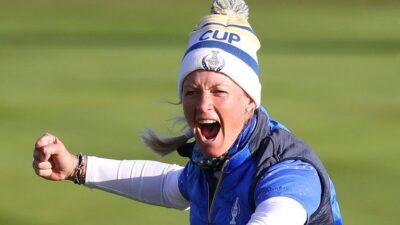 “As a mother of a young child, it is incredible how concerned you become over the future of the planet, its biodiversity, air quality, and climate,” she says. “These things are absolutely vital to the health and wellbeing of future generations, so we all need to do our best to make things better.”

And here’s another reason: golf itself is under threat.

TPC Scottsdale is well inland and 1,530 feet above sea level. But some courses aren’t so lucky, especially in the UK. The recent ‘Emergency on Planet Sport’ podcast series featured an episode where host Jonathan Overend visits Montrose Links, the world’s fifth-oldest golf course. Two tees have been moved already and more are at risk, as the coastline has been eroded by as much as two metres per year in the last decade.

That erosion and extreme weather in the form of storms battering the land border are a direct result of climate change, and if you thought it just affects a quaint old course like Montrose, you’d be wrong.

In a report published in June last year entitled ‘Playing Against the Clock: Global Sport, the Climate Emergency and the Case For Rapid Change’, author and leading academic David Goldblatt has predicted that within the next three decades, one in three courses used for the Open Championship will be damaged by rising sea levels, and “the R&A reports that one in six of The Open championship courses, including St. Andrews, Troon and Carnoustie, are unlikely to last out the century.”

It’s unthinkable, and yet, it’s inevitable unless more follow the Thunderbirds’ and WM Phoenix Open’s lead. While the coronavirus pandemic meant that the stadium hole at TPC Scottsdale was significantly quieter this year, the tournament’s green message is the one that really needs to be shouted about.