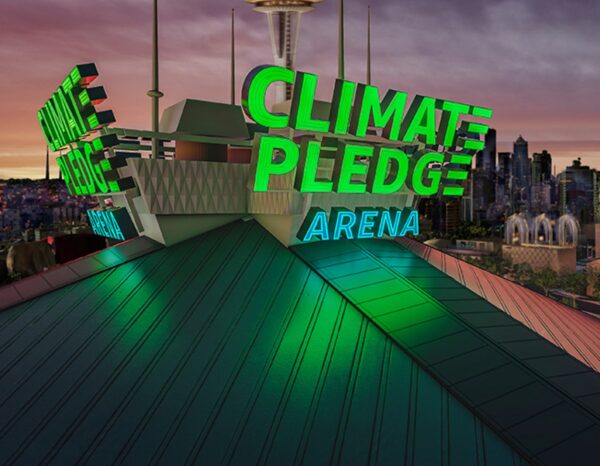 The arena in Seattle is the first in the world targeting net Zero Carbon certification by the International Living Future Institute.

I can distinctly remember the first time I read about the Green Sports Alliance. I was working in consulting right out of college with a focus on sustainability and renewable energy and seemingly out of nowhere this alliance was formed. What a perfect marriage of two of my favorite things — sustainability and sports. The possibilities were endless.

Along with some colleagues, I attended the first Green Sports Summit in 2010 in Portland, Oregon, and went on to attend the next five in cities all over the country. At this summit and many to follow the experts would trumpet an ostensibly troubling, yet paradoxically encouraging statistic that about 13 percent of our society follows science while about 71 percent of society follows sports. The logic was if the science and climate conversation could infiltrate the sports dialogue, the world’s climate problems could be mitigated.

What became increasingly obvious to nobody’s surprise was that the greenies and science folks failed to understand the facilities and sports folks and vice versa. And almost everyone involved failed to understand how to create mainstream awareness about the importance of sustainability, renewable energy and climate change.

The excitement, at least mine personally and many of my friends and colleagues at the event, eventually waned and transitioned to a cynical, case-study fatigued, “are we really going to hear about composting and recyclable materials again this year?” attitude. To reach the masses, you must add value and create awareness.

The shift to more farm-to-table concessions and recyclable materials became the expectation. Every arena should use recyclable materials if available. Every ballpark should recycle and compost. Sports facilities and the industry in its entirety deserves credit for shifting the baseline and increasing expectations. Some of the greenest buildings in the world are sports arenas and credit should be given to the likes of Mercedes Benz Arena, Levi’s Stadium and several others. Even so, it is doubtful that any fan stomping out of the net-zero, zero-waste Levi’s Stadium after the San Francisco 49ers lose to the Seattle Seahawks is paying any mind to the composting efforts.

Broadly speaking, the leagues’ efforts up to this point are noteworthy, and these improvements and initiatives are fueled in no small part by the Green Sports Alliance and its incredible leadership from folks such as founding member and board chair Scott Jenkins, who also serves as general manager at the very green Mercedes Benz Stadium.

The National Basketball Association previously dedicated an entire week to green initiatives (“NBA Green Week”), which created notable awareness during an already-crowded Earth Week. While at Sterling Planet, I was fortunate to be a part of helping the NBA offset all emissions associated with electricity usage during that week. This was valuable and the best it could do, but still intangible and hard for the average fan to understand.

The other professional sports leagues also have done their part. The National Hockey League was the first league to build out a focus on sustainability, hiring a sustainability director and creating NHL Green. Major League Baseball recently announced a partnership with the Discovery Foundation around Earth Day and highlights best practices on its website. Within the green sports community, the National Football League is usually thought of as a laggard, but it does an incredible job with greening the Super Bowl and its host community on an annual basis.

Over the years, the initiatives have shifted to more tangible projects. NRG should be lauded for spearheading solar onsite at sports venues such as FedEx Field, Levi’s Stadium and Reliant Stadium, among others. While at WGL Energy, I was fortunate enough to be a part of an onsite solar installation at Nationals Park, and we worked with Monumental Sports and Entertainment to power the Capital One Center (Verizon Center at the time) with offsite solar.

The physical, tangible installations created awareness for those that happen to notice the unsexy steel and infrastructure at a stadium. And sure, those that charge their EVs at Levi’s Stadium receive some value from the green sports movement. But anyone who has an EV is likely already part of the climate conversation.

So how does sustainability in sports leverage its broad reach to engage the non-greeny sports fan? How does it engage the mainstream about the importance of renewable energy and lowering emissions to prevent further climate change?

Anecdotally, I remember watching the NBA Playoffs in 2018 when Coors Light ran an ad about renewable energy and one of my buddies saying “Hey Walsh, did you see that? Solar and beer. That’s pretty cool!” And he was right, almost. Solar, beer and SPORTS is even cooler. And a commercial is nice, but it is not a permanent fixture.

So how does the industry provide this long-term permanent awareness and leverage the eyeballs of sports fans to drive dialogue about climate change? How about naming a brand new, state-of-the-art arena after the most ambitious pledge to curb climate change?

Yes, that is the answer. Amazon recently secured naming rights to an arena under construction in Seattle and elected to name it “Climate Pledge Arena.” The arena will be the home to NHL Seattle and the WNBA Storm. The fact that it will be the first net-zero-carbon arena in the world, produces zero waste and will be powered by 100 percent renewable energy is second fiddle. That every fan, sponsor, announcer, player, coach, owner and passerby will see “Climate Pledge” when an event is taking place there is what really matters.

Amazon’s climate journey has been labyrinthine to say the least. It has been criticized by everyone from Greenpeace to its own employees (see Amazon Employees for Climate Justice). These organizations drove Amazon to create aggressive sustainability and renewable energy goals. While Amazon got off to a slow start regarding sustainability and certainly still has its shortcomings, its progress of late is nothing short of impressive.

Amazon is committed to operating with 100 percent renewable energy by 2025 and reaching net-zero carbon by 2040. It boasts close to 100 renewable energy projects worldwide totaling almost 3 gigawatts of renewable energy capacity and more than 7 million megawatt-hours of annual generation, more than the entire state of Delaware. Having personally worked with the Amazon renewable energy team to complete multiple projects, I can say they have some of the smartest people in the industry working on these initiatives. And while they may be difficult to deal with, their recent success is noteworthy.

On top of the success and initiatives at Amazon, founder and CEO Jeff Bezos recently announced a $10 billion Climate Pledge to fight climate change via the creation of the Bezos Earth Fund. Naysayers will point to the fact that $10 billion is a small relative amount of Bezos’ net worth. They will ask when Amazon will stop supporting the oil and gas industry or when it will halt support for climate-denying organizations such as the Competitive Enterprise Institute. The world needs these said naysayers to continue to push the envelope.

In addition to playing watchdog and urging the world’s most powerful company to improve its sustainability initiatives, we should also look at the glass half-full. The world has $10 billion more available to fund climate initiatives than it did before. The sports world, by way of Amazon, is taking the climate conversation blatantly mainstream. These efforts will help accelerate the shift to a cleaner world powered by renewable energy.