The Environment Affects Baseball. These Players Want to Help.

The Environment Affects Baseball. These Players Want to Help. 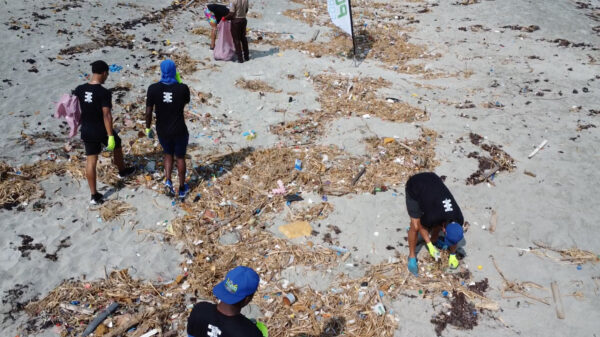 In 2019, Players for the Planet held a beach cleanup in the Dominican Republic, where baseball players saw how much waste washed up on the shores.

Beach cleanups, plastic reduction, rethinking travel: A group of major leaguers is pushing back in a wasteful sport.

Flying all over North America every week is part of being a major leaguer. The Milwaukee Brewers, for instance, traveled as far away as San Diego and Miami as part of their 162-game regular season this year. Now multiply that by 30 teams across Major League Baseball.

Brewers reliever Brent Suter can’t help but think about how much fuel is burned and how many emissions spewed during all of those flights. As he has helped the Brewers reach the postseason for a franchise-record fourth straight season, he worries about the planet.

“The fact that you can just go wherever you like, it’s just not sustainable,” he said before a recent game. “We can’t just keep adding carbon to the atmosphere and not offsetting it and not set limits on curbing it in any industries, and still searching every nook and cranny of the globe for fossil fuels.”

As human activity continues changing the climate — hotter summers, stronger hurricanes, more flooding, wildlife at greater risk — no part of society will be unaffected. That includes baseball, where the majority of M.L.B. games are at the mercy of the elements at outdoor stadiums. The sport has already seen some of those effects.

“We were in Oakland last year getting ready for the series, and we had batting practice canceled both days and almost had the games canceled because of smoke from the wildfires. And the air quality was so bad,” shortstop Nick Ahmed of the Arizona Diamondbacks said of the fires in California at the time. “I know that’s been an issue up there as well this year. Hopefully people wake up and understand that our planet needs to be cared for in a great way.” 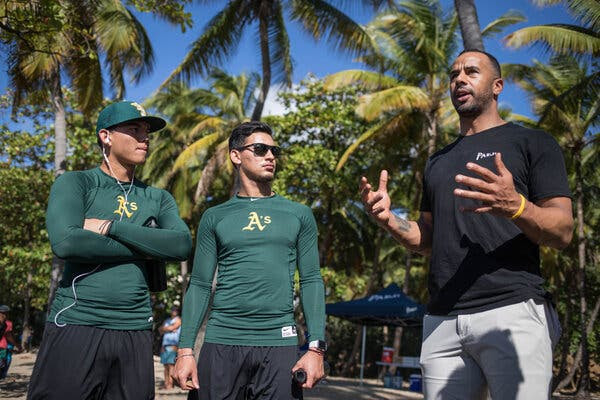 Around M.L.B. clubhouses — where topics like the environment don’t come up often — a few players have been alarmed by the state of the globe and are trying to do something about it, even in modest ways. While players said the most power to make change lay with larger bodies — governments, corporations, leagues, teams — several are leading efforts inside and outside their clubhouses.

While with the Detroit Tigers, Daniel Norris, now a Brewers reliever, said he used to provide his teammates and key staff members with reusable mugs a company had given him. And when he saw teammates shoot used water bottles into a trash bin, Norris used humor to remind them of the impact of their choices.

“I’m like, ‘That’s a sick shot, but it would have been sicker if you recycled it, you know?’” Norris, 28, said earlier this year, adding later, “And if I do it enough, then maybe they’ll finally change or if they see me go and grab their bottle out of the trash can and put it in the recycling.”

Suter, 32, who studied environmental science and public policy at Harvard, said he constantly told his teammates to refill their plastic bottles from the water coolers rather than reaching for a new one. “I don’t want to be, like, too annoying about it,” he said, “but it’s got to be said.”

The amount of waste produced in clubhouses spurred Chris Dickerson to form a nonprofit called Players for the Planet, which Norris, Suter and others joined. While Dickerson was with the Louisville Bats, the Class AAA affiliate of the Cincinnati Reds, before his major-league call-up in 2008, he had a locker near a trash can in the clubhouse. He cringed at what he witnessed. 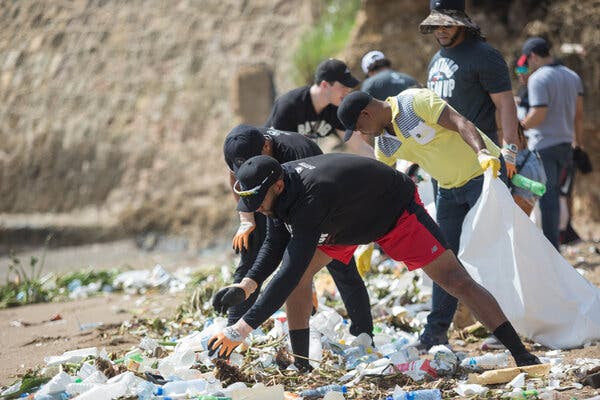 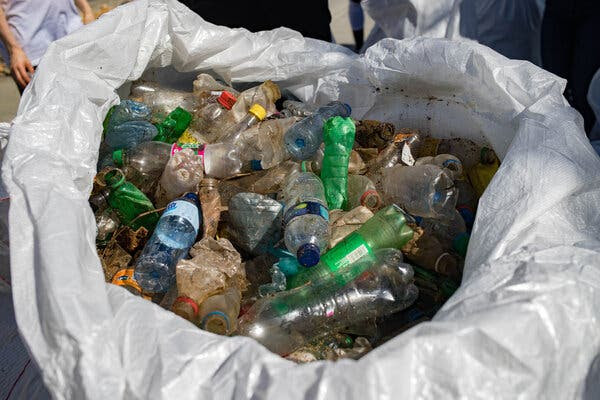 After batting practice on a hot, humid day, Dickerson, 39, counted 500 bottles thrown away. In an average week, he estimated 2,000 bottles were tossed. Between 120 minor league and 30 major league teams, he started to add up the estimated 300,000 bottles players used every day. “And we play 162 games,” he said.

Over the years, Dickerson helped build a network of athletes, now numbering nearly 100, who felt similarly about green initiatives. The nonprofit has, among other projects, organized collections for electronic waste, helped some M.L.B. teams with their own environmental efforts, led tree planting, created an online course in Spanish about plastic pollution for players at academies in the Dominican Republic, and held beach cleanups there with major and minor league players.

“In our case, Dominicans, we’re an island, and waste affects us more than anyone,” Nelson Cruz, 41, a slugger for the Tampa Bay Rays who took part in a cleanup in 2019 along with Amed Rosario, said earlier this year. “All that trash that we throw away returns to us.”

With the help of Dickerson, Ahmed said he pushed the Diamondbacks to install more recycling bins in the food room and clubhouse. During the coronavirus pandemic, Ahmed became annoyed with what he saw as the reliance on single-use plastics in clubhouses skyrocketing out of fear of transmitting the virus. 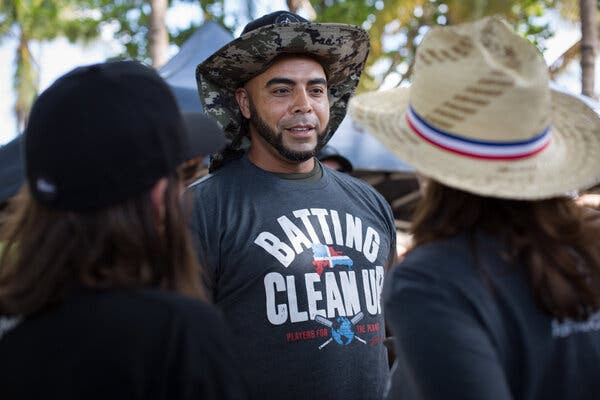 ‘“I’m trying to encourage my teammates to do the same things I’m doing by using canteens,” said Ahmed, 31, who first began focusing on the planet’s health a few years ago when he sought out healthier and more sustainable foods. “And then you just tell guys to recycle and to think about it. Nobody responds well to getting hit over the head and told to do something.”

Suter said players had become more open to discussing the planet. Back in 2016, he was teased by teammates for bringing food to the clubhouse in reusable containers and talking about the environment.

During his 15 years in professional baseball, including parts of seven seasons in the major leagues, Dickerson said he felt there was a group of “good old boys” in clubhouses who thought of climate change as “a myth made up by Democrats” or “some hippie nonsense.”

“But now,” he said, “as it affects your hunting in the off-season, and you see how it’s changing, you see the fires that affect the wildlife, the deer that you hunt, the fish that you catch. Then it’s a problem, and then you’re going to be like, ‘Oh, man, there might be something to this.’”

Norris, in particular, has seen firsthand how the planet has changed. While pursing his passions of surfing and nature photography, he said, he has learned more about the health of the oceans and seen more plastic in the water, which he called “disgusting.” He said he had seen surf breaks around the world ruined because of changing sandbars or damaged reefs.

“I’m outside most of my life,” he said. “I don’t really hang out or watch Netflix. Surfing and hiking — all that stuff is a huge part of my life. I appreciate it, and I want to take care of as long as I can. Generations past us want to enjoy that, too. But if it’s changing so fast, then they’re not going to have that passion.”

While surfing in Nicaragua, Norris said he saw a valuable lesson: People used materials for as long as possible — the opposite of the throwaway culture of other countries. He said it could be tough to be green in the major leagues, where the average salary is over $4 million a year, some players show off their many flashy outfits and gas-guzzling cars, and apparel companies constantly send players gear.

(Several players said they donated their old or unused gear to minor league players, who earn a pittance of the major league salaries. Cruz said he also donated his spare gear in his home country.)

Norris, who doesn’t own a home and spends his off-seasons living out of a van with solar panels, said if he bought clothes, it was from companies that use recycled materials, like board shorts made from old fishnets. The boots he wears away from the field are resoled so he can use them for 10 to 15 years. He still uses the two suits that Justin Verlander, a former Tigers teammate, bought him when he was a rookie to wear on team flights.

“The only other suit I bought was from a thrift store,” he said. 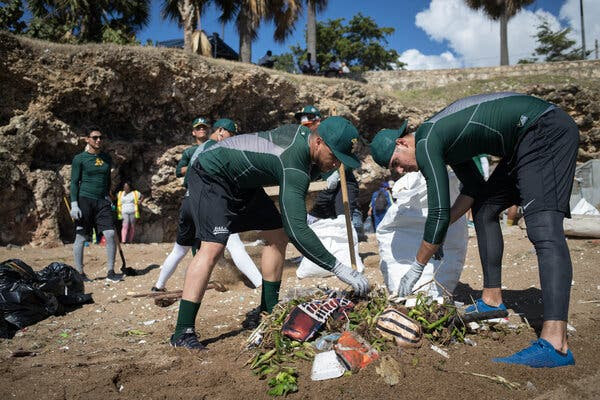 To cut down on his carbon footprint, Suter drives an electric car. He said his home in Cincinnati had solar panels, and he helped start an initiative called Sidelining Carbon, which raises money to buy carbon credits to offset professional sports travel.

Regarding the future, Suter and Dickerson said, they worry about how climate change will further encroach on their planet and sport, with hot days making it harder for players to train and spectators to watch.

But during last year’s pandemic-shortened season, Suter said he saw what could be a glimpse at the future. Teams traveled only regionally during the regular season, regardless of traditional divisions, and the postseason was held at neutral sites in Southern California and Texas, cutting down on emissions. An added benefit: Shorter travel meant players had more time to recover.

“There’s going to be growing pains,” Suter said. “It’s just a matter how severe we want those to be, because if we wait and wait, it’s just going to be borderline apocalyptic.”

“I would appreciate that just from a travel perspective, and our planet would as well,” Ahmed said of reducing travel. “So that’s a good idea. I don’t think there’s a one-size-fits-all or a one-step solution to fix things. But little things like that, that can get changed along the way, can hopefully add up to cumulative big change.”