That’s Not Just Grass. That’s the Best Turf in Texas.

That’s Not Just Grass. That’s the Best Turf in Texas. 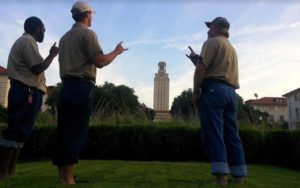 Photo courtesy of Office of Sustainability.

The landscaping of The University of Texas at Austin’s main campus is now nearly 100 percent organic. This makes the 431 acres the largest example of organic landscaping in the Texas capital.

UT’s switch to organic landscaping began in 2009 when landscapers Justin Hayes and Mike Wallick began experimenting with a section of turf on University Avenue between Martin Luther King Jr. Boulevard and the Littlefield Fountain. After stopping the application of chemicals to fertilize and control weeds, the landscape crew aerated the soil and applied organic compost. The grass thrived, and its need for water decreased 50 percent.

This plot was named “Best Turf in Texas” by the Texas Turfgrass Association in 2012 — the first time that organically managed turf was awarded this honor — and organic landscaping on campus sprang to life.

After the success of the test plot, additional parts of the campus landscape were brought under organic management, starting with areas like the Turtle Pond, the flag poles near the Main Building, and the South Mall. The change to the South Mall had a larger impact: Before organic compost, this heavily used area received new turf each year after the spring commencement ceremonies, costing about $40,000. But now that organic compost and other amendments have improved soil health, the landscaping team has not needed to install new turf in this area for six years.

“We made campus a healthier ecosystem by improving our soils and using native plants, making us better stewards of a vital part of campus that we are striving to rejuvenate: Waller Creek,” says Jim Carse, manager of Landscape Services. “We are also saving money because when you build healthier soils that can retain water, you reduce the need for irrigation.”