Target Field Honored as one of the ‘Greenest Ballparks in America’

Target Field Honored as one of the ‘Greenest Ballparks in America’ 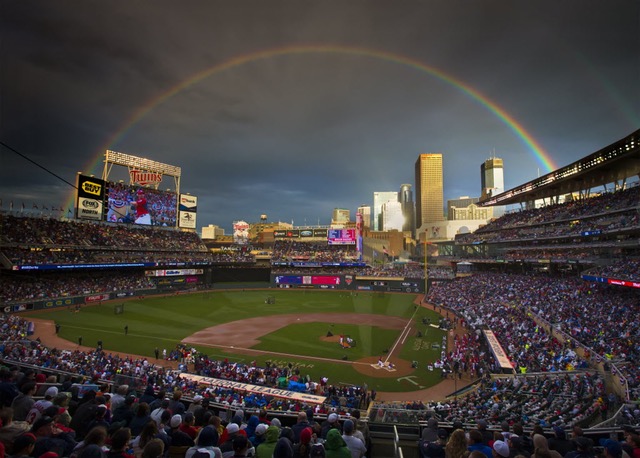 The seven-year-old Minneapolis ballpark already had silver certification through LEED, which stands for Leadership in Energy and Environmental Design. LEED is the nation’s leading program in design, construction and high-performance green buildings.

Jase Miller, manager of ballpark operations for the Minnesota Twins, said fans should be proud of helping to make Target Field the greenest ballpark in America. “Together, we’ve kept thousands of tons of trash out of local landfills,” he said. “That’s a huge win not just for Target Field, but for the whole community.”

For the past five years, the Twins have donated unused food to local charities, including 213,622 cased meats, 34,488 hamburgers and 16,599 chicken breasts.

Beer cups, plates and nacho trays were part of 300 tons of trash converted to compost.

Target Field is the first to use Arc, a digital platform, to track sustainability, the team announced. With Arc, the Twins are able to track and increase alternative transportation, energy and water efficiency, waste diversion and recycling.

Through “aggressive recycling” and waste-to-energy programs, the Twins have kept more than 8,200 tons of waste out of local landfills since 2011, the team said. Some 3,213 tons have been recycled, while 2,755 have been sent to the nearby Hennepin Energy Recovery Center and 2,288 tons of organics have been composted, according to a news release.

The team hopes to improve those numbers this year with better equipment and training.

Team President Dave St. Peter said the team wants to honor “the power of sport to inspire, build the best fan experience and cause no unnecessary harm.”