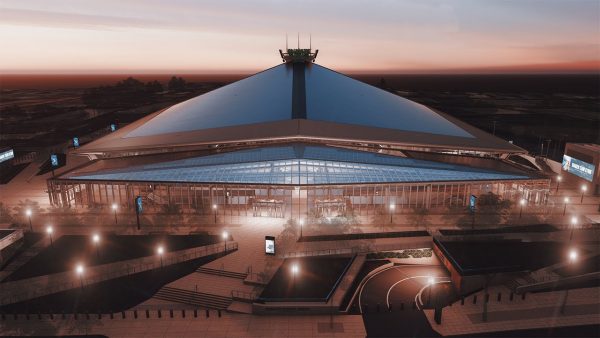 Designs were approved, permits secured, and construction was well underway at what’s now known as Climate Pledge Arena in Seattle before, well, everything changed. Midway through construction, financer Amazon decided it wanted to open the world’s first zero-carbon arena, a next-level sustainable facility built in complete accordance with both the Paris Climate Agreement and the stringent International Living Future Institute certification standards.

“We had to do some pretty significant redesigns; we had to reapply for new permits,” said Rob Johnson, VP of sustainability and transportation for the Seattle Kraken and Climate Pledge Arena. “It was a lot. It [cost] several million dollars.”

Those several million dollars, however, will pay off in the end, a fact more sports venues, teams and leagues are finding out. Experts say sustainable practices not only preserve the planet but can also reduce costs and enhance revenues when done right.

Climate Pledge Arena’s pivot meant several major changes, starting with converting spaces initially constructed to house natural gas-powered systems into areas that could support electricity-powered components, like the hot water boilers, heating systems and the dehumidification system for the ice rink. On-site renewable energy sources were also needed, so solar panels were installed on the atrium of the arena’s roof and its accompanying parking garage (the arena’s 44 million-pound roof is a National Historic Landmark, meaning the 40,000 square feet of space on top of it are a no-go for panels). It also meant figuring out how to account for the venue’s carbon emissions (the solution, for now, is buying credible carbon offsets) and how to meet the remainder of the venue’s energy needs through new renewable resources (the arena and Amazon will be investing in new wind and solar farms to eventually power the venue exclusively via renewable energy sources).

As Johnson said, that’s a lot, with a large price tag. But when the Seattle Kraken’s new home opens this fall, Climate Pledge Arena will be environmentally friendly—and, in many ways, surprisingly cost-efficient despite the upfront investments.

“There’s a certainty level when you look at the price of something like electricity,” Johnson said. “There’s less volatility than the price of more carbon-intensive resources, so while natural gas might seem cheaper today, the long curve is likely to be more expensive than electricity. There’s a case to be made about some of the long-term operating expenses, but our ownership group was more motivated by ensuring that we are really taking this climate pledge seriously.”

There’s also a case to be made for savings on some of the short-term operating expenses. The venue’s water conservation efforts, for example, include a planned “rain-to-rink” system (fitting in a city with 155 days of measurable precipitation per year) that will collect water from the roof to make the ice. The system will likely result in a substantially lower water bill. Climate Pledge Arena’s zero-waste goal (meaning more than 90% of its waste will be diverted away from landfills) also means less money spent on landfill hauling, and even some potential earnings from recyclable materials.

Leagues, teams and venues across the country have seen similar returns on their own sustainable investments. Even smaller sustainable operational or procurement changes can bring substantial savings—to the tune of tens of millions of dollars over the longer term, according to Dr. Allen Hershkowitz, the Yankees’ environmental science advisor and the founding director of Sport and Sustainability International.

“The business case for sustainability has always been fundamental from a cost reduction perspective,” Hershkowitz said in a phone interview. “Some aspect of this is that it’s the right thing to do, but we’re not going to get to a net carbon zero economy based on good intentions. You have to outcompete the bad stuff by reducing costs while also bringing in new revenue.”

Sustainable investments can do both. For example: Hershkowitz says the St. Louis Cardinals reduced their energy use by 24% (and thus their energy bill) when they started investing in sustainability. The Mariners knocked half a million dollars off of their annual utility costs; the Yankees saved more than $600,000 on lighting just by shifting to more efficient technology.

Curtis Schmillen, the director of operations at U.S. Bank Stadium in Minneapolis, which hosts more than 1.4 million guests at 300-plus events each year, said that by implementing smart building management systems and energy use policies, the facility has brought consumption down by more than 10% since it opened in 2016. It has also saved money through waste-management changes, an area Schmillen suggests other venues should look into as a first step toward becoming more sustainable. “It’s fairly simple, very understandable, and will produce a very quick return on the investment,” he said.

The Atlanta Hawks, who hosted the first-ever zero-waste NBA All-Star Game this spring at State Farm Arena and are starting to generate revenue from recycling materials like aluminum and cardboard, are a good example.

“We now look at materials as commodities, not trash,” said Sofi Armenakian, director of sustainability and operations for the Hawks and State Farm Arena. “The area we used to just think of as dumpsters is now a place we recover resources. When we collect all of our aluminum, plastic, cardboard and metals as commodities, we can operate at net zero, since you’re not spending to have it hauled to landfills.”

The market for different materials varies by state, but from Seattle to Minneapolis to Atlanta, a sustainable waste management system at the very least eliminates an expense. In some cases, venues get paid for the resources they recycle. “It’s not a tremendous amount, but you’re either making something or certainly at least breaking even,” Armenakian explains.

Revenue from environmentally conscious sponsors is also very real: Johnson said Climate Pledge Arena’s sales and sponsorships teams saw an influx of new interest after it unveiled its name and public sustainability pledge. As Hershkowitz put it, “There’s no question that the diversity of sponsor opportunities has broadened because of sustainability.”

What’s priceless, though, is the power sports leagues can have on changing cultural conversations. While reducing the “few thousand tons of waste” a sports venue generates per year is important, Hershkowitz said, it’s a fraction of the 14 billion tons of waste the United States produces annually.

“Getting [venues] to do the right thing is fundamental,” Hershkowitz said. “But if you’re looking at biological impacts on the planet, the biggest bang for the buck—the single most important thing we can do to advance sustainability—is change cultural attitudes [and] expectations about how we relate to the planet. Sport can do that, because sport has been enormously influential culturally. Less than 20% of American adults follow science; 80% follow sports.”