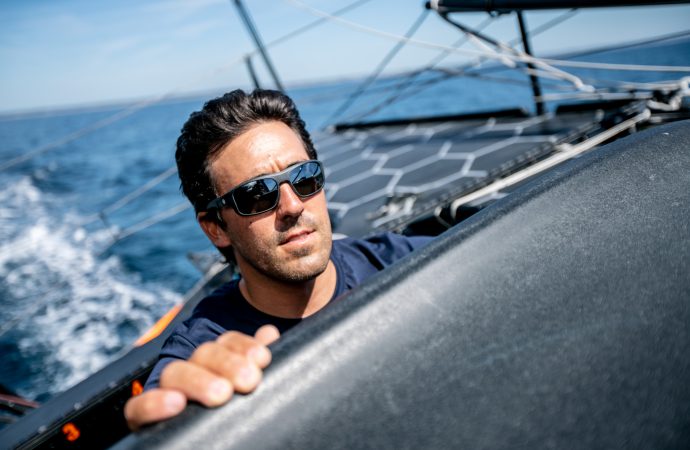 There are many ways to define a successful leader. Indeed, there are dozens, if not hundreds, of books published each year focused on the art and science of great leadership. But there are a couple of common themes running through most of the literature in this area. One is that great leaders lead from the front. Another is that they will do things that less effective leaders won’t do.

When The Sustainability Report calls Hawaii-based Mark Towill to discuss the 11th Hour Racing Team’s preparations ahead of the 2021/22 Ocean Race, it’s 6am his time. He’s just finished a two-hour call about a sustainable design and build workshop that the team is facilitating to “push the boundaries” of the boat-building process to make it as environmentally sound as possible.

When it is put to him that logging on to a call at 4am to discuss sustainability issues is something that most chief executives could easily avoid, Towill explains that the team’s ability to affect positive change by extending its sphere of influence (in this case, using its profile and expertise to accelerate a more sustainable marine industry) is just as important as crossing the line in first place when the next edition of the race concludes in Genoa in 2022.

“As sportspeople, we are very motivated about winning this race, which we feel is the pinnacle of ocean racing, and achieve a life-long dream we’ve had,” he says. “But more than that, it’s about how we can use that opportunity to leave a legacy, to have an impact, and take care of the ocean that means so much to us.”

To underline his point, Towill asserts that being sustainable and being competitive “aren’t mutually exclusive” and, in some cases, can lead to a competitive advantage.

And in sport, when a competitive advantage is identified, the best athletes and teams put together a strategy to leverage it.

As such, the 11th Hour Racing Team devised and constructed a sustainability policy that underpins all of the work they do. Significantly, that policy has been endorsed and signed by Towill and his team co-founder Charlie Enright.

The policy has been broken down into four pillars: leadership, innovation, legacy and collaboration.

In the short term, Towill expects these pillars and their principles will help the team make incremental steps in the right direction. For instance, the team is working with the French sailing company Mer Concepts to research different materials that can be used for the boat-building process, such as biocomposites and recycled carbon. Incorporating renewable energy into the boats is also being explored.

But much of the policy speaks to Towill’s long-term vision of a round-the-world sailing race in which all the boats are made entirely of recycled material and have net-zero carbon impact.

“That to me seems completely realistic,” he explains. “It seems like a medium-term achievable goal, and so from a leadership perspective we’re focused on trying to steer things in that direction.”

Each pillar of sustainability policy can be explored standalone. For example, the leadership element of the policy focuses on the creation of ambassadors – internally and externally. Within the 11th Hour Racing Team, training and education around ocean stewardship and sustainability is core for all members.

While the Covid-19 pandemic has frustrated the team’s progress in terms of sailing and getting together physically (members of the team live in several different countries), the unexpected break has given Towill the opportunity to engage the team in specially-devised lectures, hosted by guest speakers, and “Netflix viewing parties” in which the team watched films like Richard Vevers’ Chasing Coral.

The notion of creating sustainability ambassadors within the team filters down into the sailor recruitment process. Character and sustainability sensibilities, says Towill, is just as important as proficiency on the water when it comes to making team additions.

“Sailing skills are a prerequisite, but once you get to a certain skill level the personality and intangibles become so much more important,” Towill enthuses. “If you have someone who is a marginally better sailor than the next guy, but they’re a giant pain in the ass to deal with, that’s a performance inhibitor for the team.

“As the boats are getting smaller and the teams are getting smaller, the individual person contributes that much more to the team dynamic. Those things really matter to us and sustainability is part of that. As we build our team this is made very clear to anyone we engage with.”

Other elements of the policy work very much in sync with each other. Innovation, for example, would be very difficult to achieve without collaboration.

Externally, the team has established the Ocean Hour Network, a mastermind group or “unofficial board” that acts as ambassadors and advisers. Towill aims to build a “very interdisciplinary group” that includes scientists, businesspeople, politicians, and other professional athletes such as surfers, who share sailors’ kinship with the water.

Musto, the 11th Hour Racing Team’s clothing suppliers for three campaigns, reduced 70% of its plastic consumption through its collaboration with the team.

“They actually found it more efficient for their business,” Towill explains. “They saved money and I actually think they saw an increase in sales. Just as much as we believe that sustainability and competitiveness are not mutually exclusive in a sporting context, I also think that applies to a business context.”

He acknowledges that the Musto example illustrates how sports, when operating under the right values, can generate positive impacts further down the value chain. The chief executive tips his hat to the team’s title sponsor, 11th Hour Racing (a sailing and ocean health body established by the Schmidt Family Foundation) for shifting the focus of the Ocean Race even more towards sustainability through its sponsorship of the competition, and the Ocean Race itself for using its platform to amplify positive action.

“Previous editions of the race have always included some sort of environmental focus, but the last race (2017/18) was far more focused on sustainability and ocean health than all the other editions,” Towill states. “They really influenced Volvo (former title partner) – a massive international organisation. At one of the Ocean Summits, Volvo announced that it had a plan to eliminate single-use plastic by the end of 2019, and then manufacture all Volvo cars using at least 25% recycled plastic and other materials by 2025.

“If you think about this relatively small sporting property and even smaller organisation in 11th Hour Racing having an impact on a global leader in the car industry, that’s tangible impact right there.”

Tangible impact is something that Towill has strived for from a young age. Scarcity of resources and a reliance on the ocean, he says, are concepts he’s all-too-familiar with after growing up in Hawaii. But his attitude towards ocean stewardship was really shaped as a result of his round-the-world travels taking him to the shores of Vietnam and India, which are some of the most polluted areas on Earth.

The amount of “eye-opening” plastic debris in the water served as enough motivation for Towill and Enwright to take ocean stewardship on as a priority.

And one of the “most rewarding” aspects of the team’s sustainability goals, Towill explains, is the legacy component, in which the team provides grants of $10,000 to nonprofits working on sustainability projects in the various Ocean Race stopovers.

During the 2017/18 race, that grant was awarded to an organisation in Cape Town that was dealing with access to water equity during a terrible drought, and a team of scuba divers in The Hague who rescue derelict fishing nets and turn them into products like socks and swimwear. In Lisbon, the team worked with a nonprofit working in the circular economy space, while a Swedish sustainable fishing company also received a grant.

“We have a vision beyond the competition,” he emphasises. “It seems to me there’s a fundamental shift coming in sport and the way we see global fans of sport engage with other properties. There’s been a big shift in the business community away from pure capitalism – they’re thinking about their impact on the environment, community, wellness of employees. Hopefully that becomes the new norm.”